Kevin C. Cox
Brooks Koepka lines up a putt on the first green during the final round of the 2019 Open Championship.

By Ryan Herrington
PORTRUSH, Northern Ireland — Brooks Koepka knew what he was getting into on Sunday at Royal Portrush. It wasn’t just trying to figure out a way to rally from seven shots back of Open Championship leader Shane Lowry and steal a fifth major title in 10 starts. And he wasn’t just trying to do it in a steady rain and winds blowing 20 miles per hour. There was also the golfer he was going to be paired with in day’s penultimate twosome.

J.B. Holmes’ reputation for slow play precedes him. So does Koepka’s outspokenness about pro golf’s pace-of-play issues. The two were bound to collide on Sunday, and it seemed like they did a few times on the back nine. At one moment off the 12th green Koepka was spotted talking to a rules official and motioning to his wrist at the spot one would ordinarily be wearing a watch, as if to suggest time was dragging by.

In another instance, TV cameras caught Koepka looking upset at Holmes deliberateness on a green.

Would love to know what @BKoepka is thinking right now. #TheOpen pic.twitter.com/CNbWf2Se5r

Of course it didn’t help matters that Holmes was having an awful final round, the elements and the moment double-teaming him. He started the day six shots back of Lowry in third place, then hit his tee shot on the first hole out of bounds en route to a front-nine 41. It got worse on the back, as he eventually signed for an 87 to fall into a tie for 67th place.

Koepka, meanwhile, continued to battle his putting, unable to hole any early putts to give him some momentum before the weather made a comeback near impossible. Still, he managed to finish off a closing 74 that left him in a tied for fourth place.

After the round, Koepka was both pointed and tempered when asked about the incident and the day overall with Holmes. “Yeah, I mean, there were some times where I thought it was slow,” Koepka said. “There’s a lot of slow guys out here.” 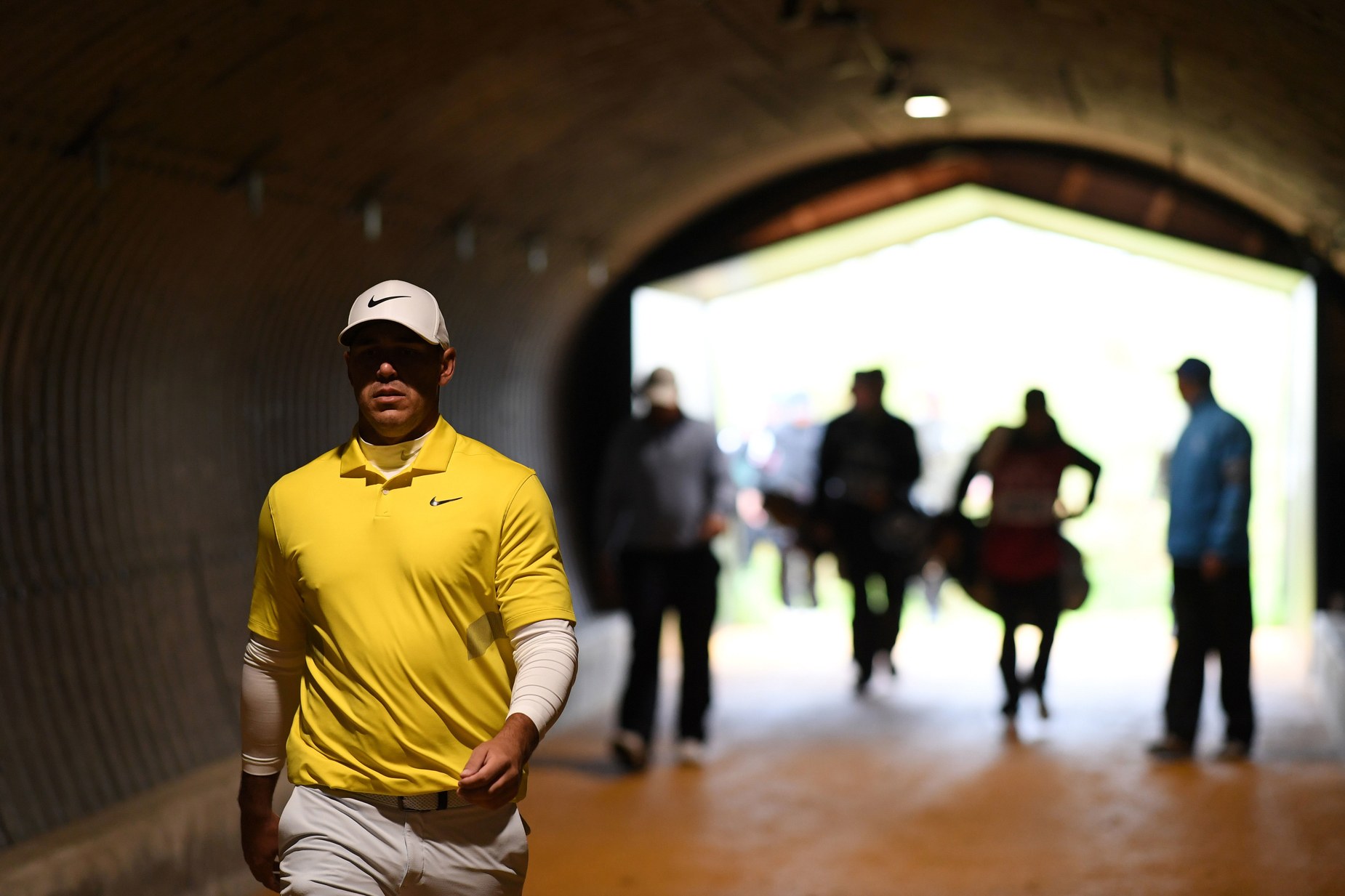 Richard Heathcote/R&A
Koepka walks briskly through a tunnel on the Portrush course on Sunday as his playing parter, Holmes, is off in the distance.

Koepka explained what is his biggest issue with Holmes on the course.

“I just always play … I’m ready to go most of the time,” Koepka said. “That’s what I don’t understand when it’s your turn to hit, your glove is not on, then you start thinking about it, that’s where the problem lies. It’s not that he takes that long. He doesn’t do anything until his turn. That’s the frustrating part. But he’s not the only one that does it out here.”

Just how bothered Koepka truly was is hard to tell given the way in which he finished out his round, which capped off an impressive stretch of major play in 2019. In all, he recorded a win, two seconds and a T-4. By carding top-five finishes in all four majors, he’s just the fifth golfer to accomplish this, joining Jack Nicklaus, Tiger Woods, Rickie Fowler and Jordan Spieth.

“It was a great run for three of them and then this one, nothing you could do,” Koepka said. “How cool is that to win in Ireland? Props to Shane, he played unbelievable golf.

“As a whole it’s awesome. That’s what I’m striving to do, play well in the big events. And I sort of did that. This week is disappointing, but the rest of them have been—it’s been great. I’m not going to lie. It’s been fun. I would have liked to have just made a few more and finished it off with a bunch of second places.”