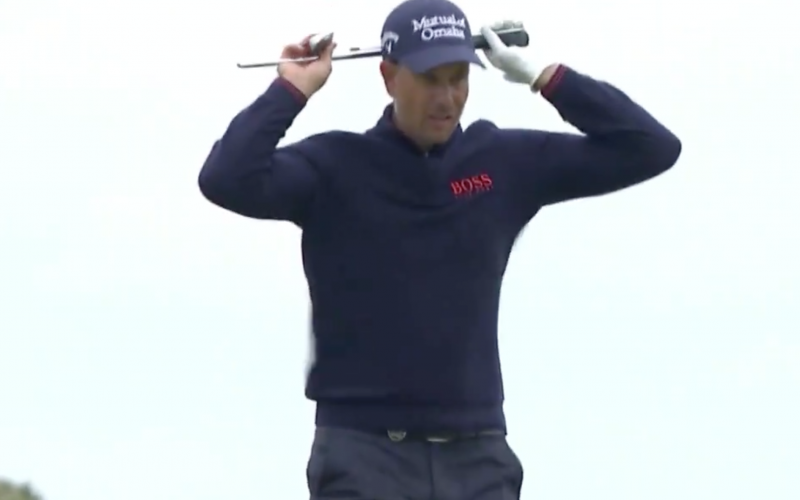 By Alex Myers
The sea was angry on Sunday at Royal Portrush, my friends. Just not as angry as Henrik Stenson.

The 2016 Open champ had an outside shot of claiming the claret jug for a second time entering the final round of the 148th British Open, but he’ll leave Northern Ireland empty-handed. In fact, he’ll also be down a golf club.

Already three over on his round as the Swede played his approach shot into No. 17, Stenson hit a cold shank. And then he snapped the club over his leg. Check it out:

A shank from Henrik Stenson and a broken iron over the leg. pic.twitter.com/qEQd7PXYmw

Bo Jackson would be proud. Good stuff. Also, notice how Henrik made sure to shout “FORE!” first. There was an incident involving a player not doing that on Friday, so nicely done all around, Henrik.

Of course, this isn’t the first time Stenson, who wound up making bogey on the hole, has taken his frustration out on his equipment. He offered up this honest assessment of his temper in a Golf Digest ‘My Shot’ interview from 2014:

*I have a temper on the golf course. When my fuses start to melt, I have to react immediately, or else I’m useless the rest of the round. Because I can’t punch myself out, I tend to take it out on my clubs. My clubs are my friends, and as such I have a bunch on my conscience for how I’ve treated them. I’ve lost count of how many drivers, fairway woods and wedges I’ve murdered. To the 7-iron I broke during the 2011 U.S. Open—and the clubs I undoubtedly will break in the future—I humbly apologize.”

No need to apologise to us, Henrik. That was the most entertaining moment of Sunday’s final round. (Eds note: Unless of course you were wowed by Shane Lowry’s near faultless golf in Sunday’s oft-horrendous weather).