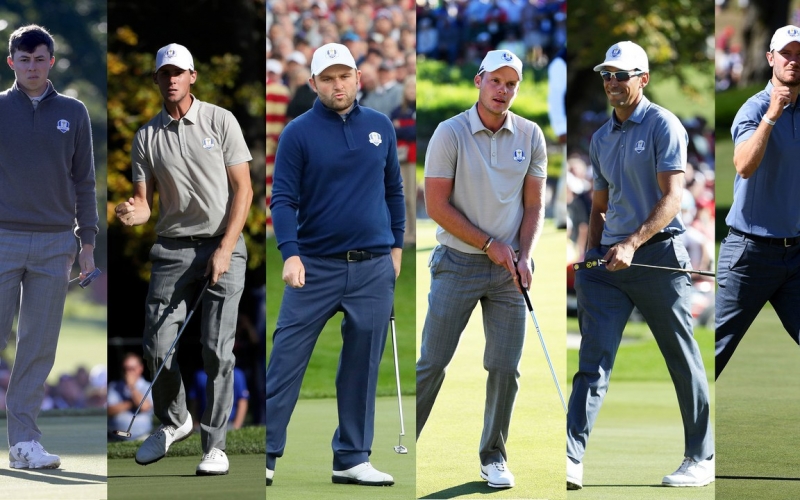 By John Huggan
It would be overstating matters to label them the “forgotten men” of European golf. But for half of the visiting team in the 2016 Ryder Cup at Hazeltine National in Minnesota, the still on-going contrast between winning and losing has been stark indeed.

Where the likes of Tommy Fleetwood, Francesco Molinari and Jon Rahm are properly hailed for their fine play during Europe’s triumphant march to victory outside Paris two years ago, six members of the preceding Old World side have seen themselves lost in the shuffle to varying degrees. Victims of circumstance—or a law of averages that inevitably produces an occasional United States victory—their unfortunate fate noted only by golf’s geekiest followers. They are mere footnotes, asterisks amid an overwhelming tide of recent European success (11-5-1 in the biennial affair since 1985).

Chris Wood. Rafa Cabrera-Bello. Matthew Fitzpatrick. Danny Willett. Andy Sullivan. Thomas Pieters. All were part of captain Darren Clarke’s team four years ago, one that went down, 17-11, to a powerful American team led by Davis Love III. But none of the six retained their places as Europe, under Thomas Bjorn’s captaincy, regained the trophy two years on.

And don’t imagine any of them are not well aware of their collective place in Ryder Cup history. While making the 12-strong side is surely a pressing ambition for just about every European golfer, for Wood, Cabrera-Bello, Fitzpatrick, Willett, Sullivan and Pieters, a second appearance would bring with it the possibility of a fulfilling redemption.

All six, no matter how many points they did or did not accumulate in Minnesota, admit to having unfinished business with the biennial battle. Not one, not even Pieters, who won four and lost only one of his five matches, looks back on his ultimate experience with anything other than a feeling of deflation. And within each man lurks a deep desire to heal a festering wound.

“I ended up massively gutted that I didn’t score a point,” says Sullivan, his reaction typical. “And massively disappointed that my career hasn’t kicked on from there. I’ve had trouble moving on, to be honest. It took me until the back end of last year to start playing good again. I’m not saying that was all down to what happened at Hazeltine, but it was definitely a big part.”

Matthew Fitzpatrick, Danny Willett and Andy Sullivan couldn’t hide their frustrations as Team Europe’s chances for victory at Hazeltine were slipping away.

Which is hardly a new phenomenon, of course. Oliver Wilson was part of the losing European team in 2008 at Valhalla, a fact that had an ultimately negative effect on the Englishman’s career. Twice in the intervening years, he has lost his European Tour card.

“It’s a black and white thing,” Wilson says. “I still look on the Ryder Cup as the best week of my golfing life. Even if it wasn’t the incredible experience more recent teams have had. Any loss for Europe sticks out because we have done so well generally. But what is the same is that, whether you win or lose as a player in that environment, you come away thinking you never want to miss another one. That actually cost me. At the end of 2009, I turned down my PGA Tour card because I thought I wouldn’t be able to play both tours and still qualify for the 2010 Ryder Cup. If I hadn’t done that, my career today would be in a very different place.”

Still, perhaps no one has ever suffered more during and after a losing Ryder Cup experience than Willett. In 2016, the then-Masters champion was subjected to all kinds of vitriolic abuse in the wake of his older brother, Peter, penning a magazine column many felt was insulting to America and Americans. At the post-match press conference, the younger Willett summed up his feelings, his despair epitomized by a 5-and-4 trouncing administered by Brooks Koepka in the singles.

Asked to expand, he did so.

“It took me a while to play well after Hazeltine,” Willett says now. “But I think our collective fate is natural in a way. No one wants to remember losers. The course was set up for the Americans. It was long and wide open. Plus, I wasn’t playing that well going in, which was unfortunate, and my main issue regardless of anything else that went on. If I had been playing well, things would have been a lot better.”

Ah, but that isn’t necessarily true. Despite the success he enjoyed in tandem with Rory McIlroy and his 3-and-2 victory over J.B. Holmes in the singles, Pieters’ memories of the week remain clouded.

“I get that we have been a little bit forgotten in the middle of so much success,” Pieters says. “Plus, first time round, you don’t really feel part of it. I didn’t really know what was going on. But my motivation to return is unaffected. I so want to play again, then again and again.”

There were good moments for Team Europe, as Thomas Pieters went 4-1 on the week, and Chris Wood and Rafa Cabrera-Bello pulled out team wins.

Pieters’ point about the role of most rookies is well made. Another thing the “Hazeltine Six” have in common—with the possible exception of Willett—is that they arrived as the bottom half of Clarke’s side. Not many were expected to play more than three times in the five series of matches.

“It can be a bit of a shock to the system,” says Andrew Coltart, who played under Mark James’ captaincy in a losing European effort at Brookline in 1999. “You make your first Ryder Cup team by playing well. So you get there thinking you are going to play three games, maybe four. Then you end up being out there only twice. That’s a bit of a kick in the crotch. You play only once before the singles, just to make sure you get a game before Sunday. Maybe, like me, you play only in the singles. Whatever, you are very aware of your place in the scheme of things. It’s never said out loud, but you have a relatively minor role. And that can be a blow to your confidence going forward. Especially if you are part of what turns out to be a losing team.”

The news hasn’t been all bad, though. Cabrera-Bello was widely viewed as unlucky not to merit one of Bjorn’s three captain’s picks in 2018 and is a strong contender to make his return this year. Fitzpatrick is even more likely to qualify. The baby-faced Englishman is off to a strong start in his effort to put behind him the memories of Hazeltine.

“Maybe only Fitz and Rafa have gone on to play anything like their best in the last four years, and they didn’t make the 2018 team either,” Sullivan says. “The rest of us have ‘softened’ up.”

Not Fitzpatrick, though. Mention Ryder Cup in his presence and the 25-year-old Yorkshireman almost immediately becomes animated. He is clearly a man with a score to settle.

“It’s not just that we lost,” he says. “My biggest disappointment was playing only once other than the singles. I could have been picked for four games and only got one. That wasn’t a great experience. Maybe I built it up too much in my mind, both when trying to qualify and after I did actually make the team. The event itself turned out to be disappointing because of that.

“Going forward, I am focusing on playing well for myself,” Fitzpatrick continues. “And if that is good enough to make the team, then great. I spoke to Rory, and he said the same thing: play well for yourself, and the team is a bi-product of that. What I do know is that if I play like I did last year, I will be in the team.” 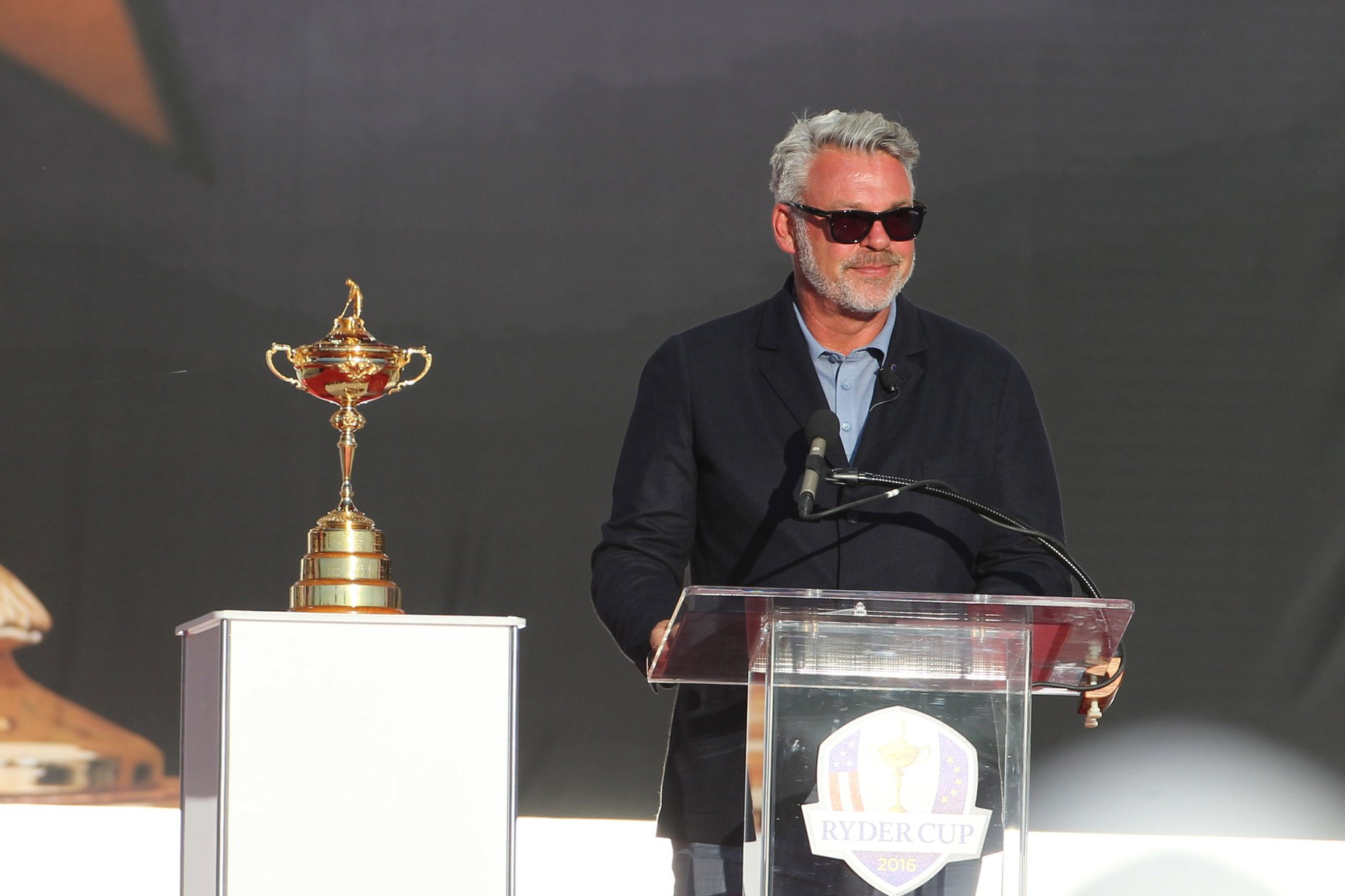 Sadly for them, the same cannot be said of either Wood or Sullivan. The former has just returned to the tour after a long-term injury to his wrist and neck, and the latter is nowhere near the form that saw him qualify four years ago. Neither looks back on their Hazeltine experience with any great fondness.

“I was standing with Fitzy on Wednesday night when we were told we weren’t playing Friday morning,” Wood says. “It was hard to take. I played one foursome and a single, and I was the best putter on the team. That was disappointing. But in Darren’s defense he wrote me a really nice letter afterwards. He realized I was playing well and was under-used.

“Playing on a losing team does add to the motivation to get back in,” he continues. “We have been brushed under the carpet in a way. Other guys have taken our places. And that hurts. But that is professional sport. It is ruthless, which is as it should be. We got sent a couple of boxes of stuff after the matches. In one was a replica of the Ryder Cup. I’m dead proud that I’ve played in one. And I have it on display. But every time I look at it, I know it wasn’t a winning Ryder Cup. It’s odd really. You don’t often get trophies for losing.” 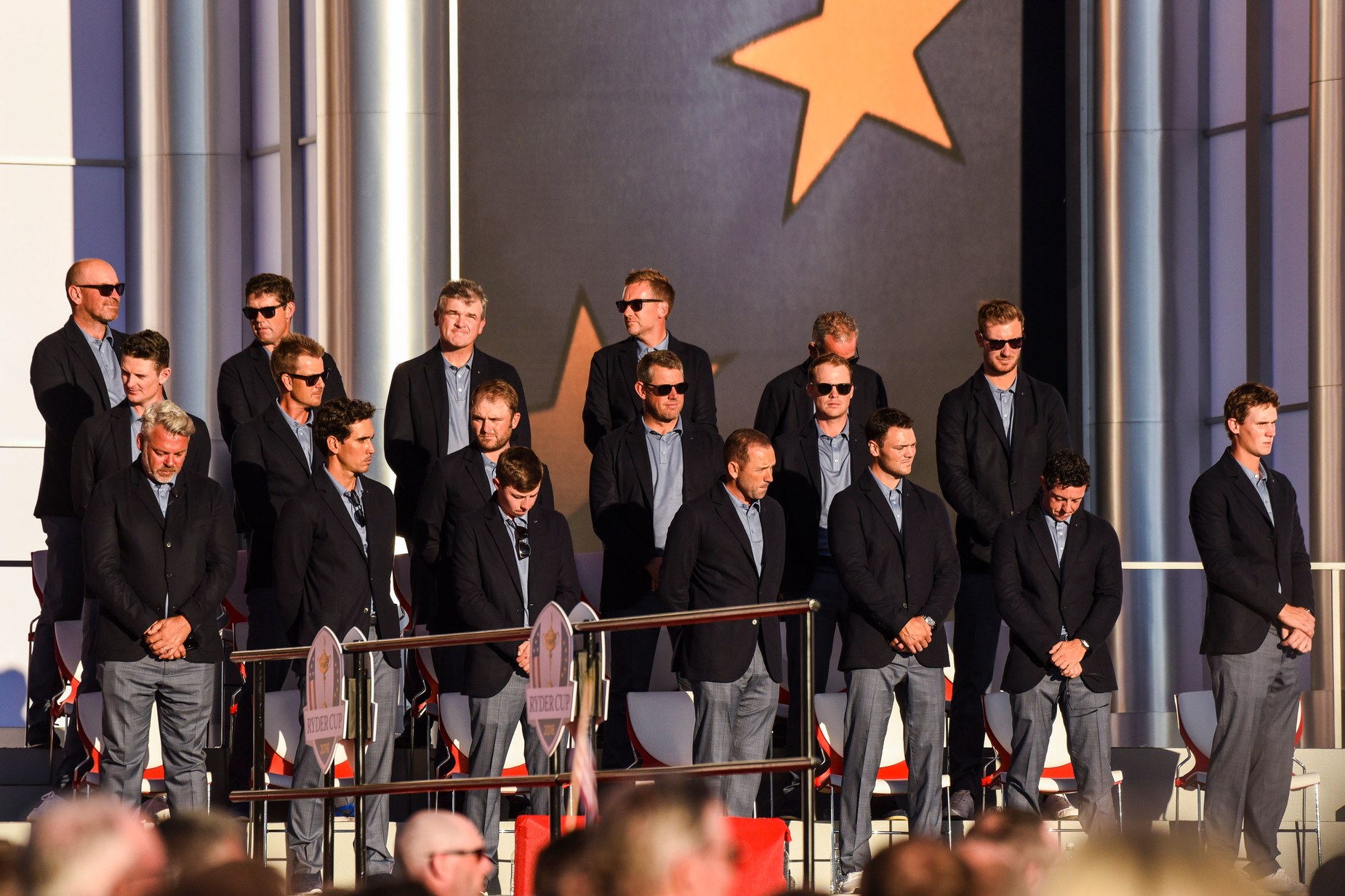 Still, there was at least one moment of light relief for one member of the Wood family.

“Playing in a Ryder Cup in the States isn’t a lot of fun,” says Chris. “My wife was getting abuse during my match with Dustin [Johnson]. They were shouting some really unpleasant things. But my Dad had it worked out. He was walking alongside Paulina [Gretzky] quite a lot. My Mum was a few yards behind.”

A rare smile then amidst a prevailing mixture of frustration and distress. History, they say, is always written by the winners. But equally, it is never forgotten by the losers.