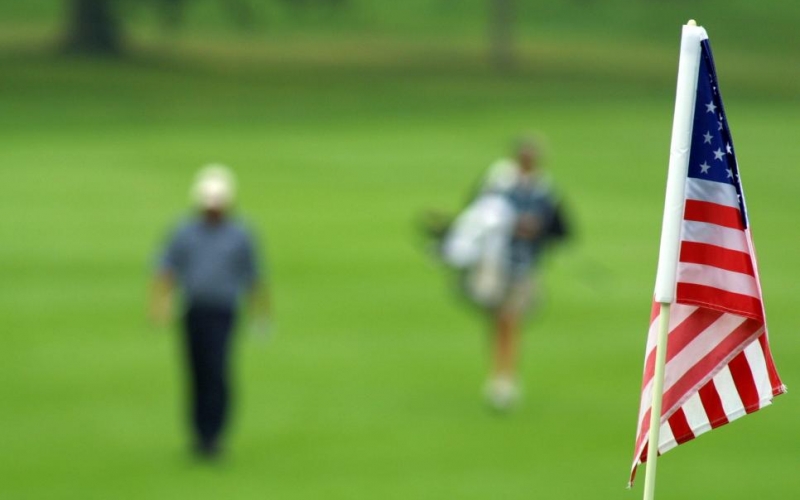 Scott Halleran
US Ryder Cup player Mark Calcavecchia walks to the second green at Laurel Valley Golf Club during the second round of the 2001 Marconi Pa. Classic.

By Dave Shedloski
In the annals of professional golf, the short-lived Pennsylvania Classic was barely a blip on the radar, existing for only seven years with a series of title sponsors, held at several venues and largely won by a roster of passersby among the PGA Tour ranks. Except for one year—and we are not talking about the 2006 edition featuring Michelle Wie—the tournament was forgettable.

But that one year is crucially important. In fact, it could be argued that the edition in question holds a special place in the history of golf and the tour.

The 2001 Marconi Pennsylvania Classic at Laurel Valley Golf Club in Ligonier, Pa., held Sept. 20-23, was the first tournament after the 9-11 terrorist attacks. A grim coincidence to the occasion was the location of the club. Laurel Valley is about 40 miles west of Shanksville, where United Airlines Flight 93 went down after passengers thwarted the hijackers’ attempt to crash the Boeing 747 into the Capitol Building. Members of the club reported watching in stunned bewilderment as the giant airship passed over the course that day, perhaps no more than 3,000 feet above them.

The tournament host was club founder Arnold Palmer, adding yet more poignancy. A pilot for more than 40 years at the time, Palmer, then 72, couldn’t keep from his voice cracking as he thought about the battle for the plane that was raging inside the cockpit, the horror of those moments. “I can just imagine a man pushing the yoke forward, and I’ve got to believe that’s what happened,” he said, fighting his emotions. “I know pilots and I know what they stand for, and I know how they think. … Just to think that a man is in the cockpit, and he’s shot or he’s taken to the back and has to do what somebody is telling him to do is the most horrible thing that can happen to a pilot, to lose his airplane.”

In the wake of the attacks, the tour had cancelled the WGC-American Express Championship in St. Louis and the Tampa Bay Classic, both scheduled to begin Sept. 13. Three days later, the PGA of America announced the postponement of the 34th Ryder Cup in England to the fall of 2002.

Though commercial air travel resumed after a few days with stricter security, many of the 158 players in the field drove to Pennsylvania if they did not have private or charter plane options. The drive from Columbus, Ohio, to Ligonier is about three hours, and I wasn’t sure what to expect, but I knew that the national call to return to “normalcy” had to include reporting on a golf event that was attempting to push through the fog of anger, sadness, disbelief and uncertainty. 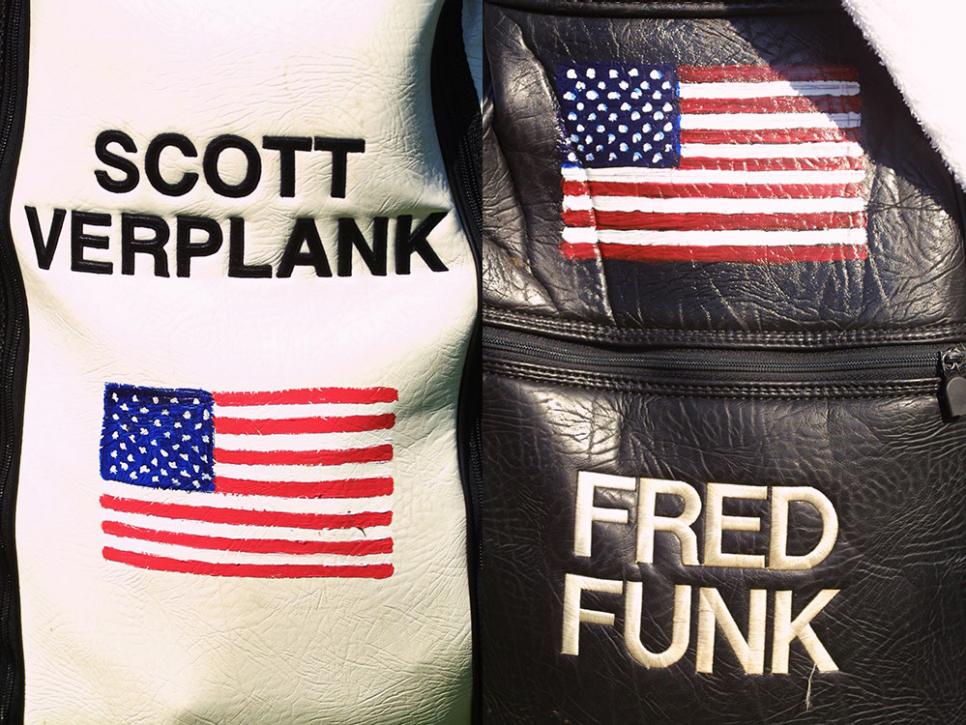 It still sticks in my mind arriving that first day on the grounds watching Fred Funk’s wife Sharon hand-painting American flags on the golf bags of any player who requested it. Each of the 18 flagsticks was adorned with American flags, too.

I remember Scott Verplank telling me that when he heard the news of the attack, he jumped to his courtesy car at Bellerive Country Club and drove straight home from St. Louis to Edmond, Okla., to be with his wife and children. He figured that, should there be further acts of violence or even the breakout of war, “I wanted to be in the only place with the only people you’d want to be with at the end.”

Such sentiment certainly was understandable.

”The tragedy caused all of us to reflect and evaluate our own lives and relationships with family and friends,” Curtis Strange, captain of the U.S. Ryder Cup team, said.

Some players wondered if it wasn’t too soon to get back on the golf course, but there they were all the same, dealing with the tenuousness of their emotions. Only one top-10 player graced the field; no surprise that it was the relentless Vijay Singh. Also on hand were six Ryder Cup team members.

“I think everybody is ready to do something,” said Rocco Mediate, a Pennsylvania native who would end up tied for second that week.

Australia’s Robert Allenby, with a 19-under 269 total, won the event by three shots over Mediate and Larry Mize, who was celebrating his 43rd birthday that Sunday. But the four days of golf were a soggy blur, the gyrations of tournament golf blended into the evolving matrix of a country feeling sad and angry and unsteady while the world was on edge.

The competition began at 7:20 a.m. ET. But dark clouds loomed. The tour had planned to halt play for seven minutes starting at noon for a moment of silence and a short ceremony that was to include the playing of the National Anthem and God Bless America, but the program had to be scrapped as inclement weather forced a suspension of more than four hours. 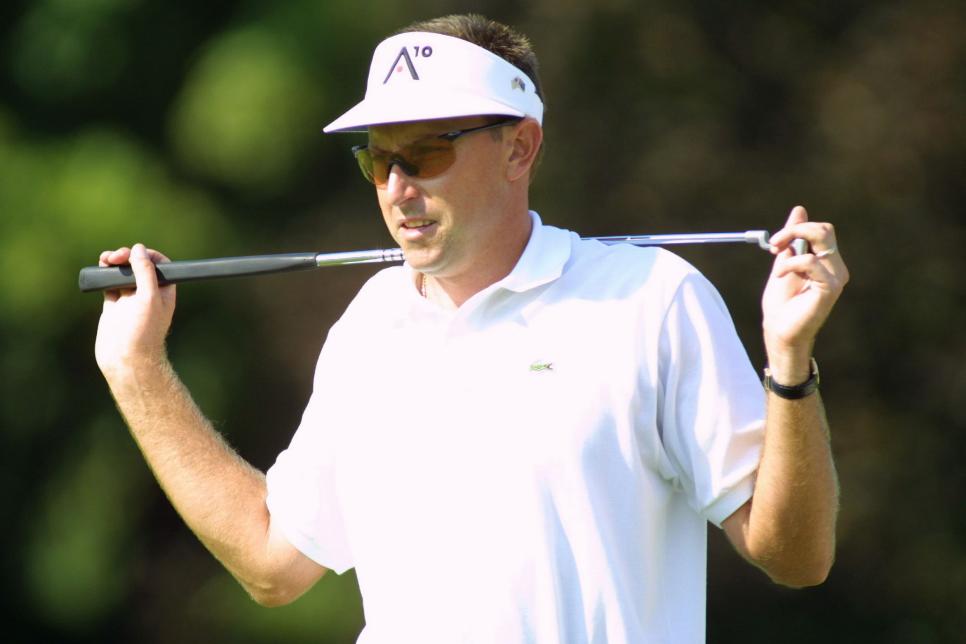 Scott Halleran
Robert Allenby would win the tournament but confess at the start of play he had trouble concentrating: “I was playing for the sake of playing.”

Nick Price, the first-round leader with a 66 and among only 81 players who completed play, spoke of how the general mood was, at times, as dank as the skies. “You hear the people in the gallery. … You hear people talking about what’s going to happen next. This is a very uncertain time for this country, and for the western world, because I think whatever action is taken now, could affect us for the next eight, 10, 15, 20 years.”

Because of the Thursday rain and morning fog delays the next two days, the tournament never got back on schedule but did finish on Sunday underneath the first sunny skies of the week. A lot of short nights for players after many sleepless nights. The only constant was the showing of national pride and patriotism. Players, caddies and some tour officials wore hats adorned with the American flag and the words, “United We Stand.”

Allenby, 30, tried to not feel guilty about feeling good about the victory and the extra work and focus he applied to get it, but he admitted that as soon as he got off the golf course each day, he went back to his hotel room and immediately turned on the news “to see if anything else had happened.” Like a lot of players, the chance to play golf was a welcome distraction. And yet, it didn’t always work out that way.

“We all want to move on with our lives, but there’s just certain things at the moment that just don’t seem important,” he said. 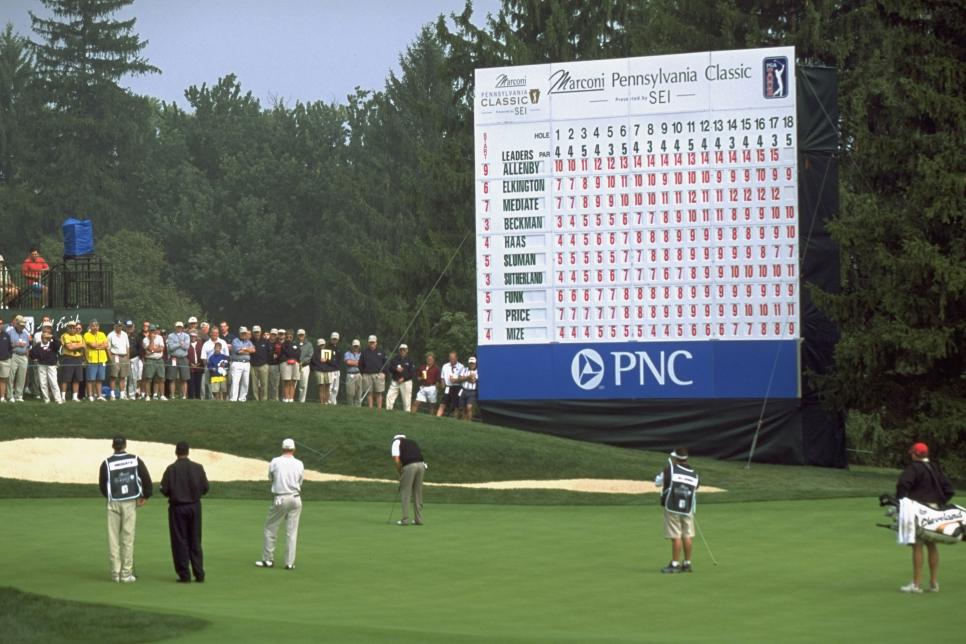 Stan Badz
Allenby putts out on the 18th hole to clinch his victory.

It was Palmer who put the week in perspective, even before the first shot was struck. America needed healing. Maybe golf, among sports and other activities, could accelerate that process, but not at the expense of losing sight of the bigger picture, one now filled with an uneasiness which likely hadn’t consumed the nation since the height of the Cold War.

“Well, you know, that’s America, and we need to get on with our activities, and that includes golf tournaments, football games, baseball games,” he said. “The only concern I might have about all of what we are talking about is that we don’t forget what has happened.”