The European Team pulled an absolutely brilliant move to get the U.S. fans on their side 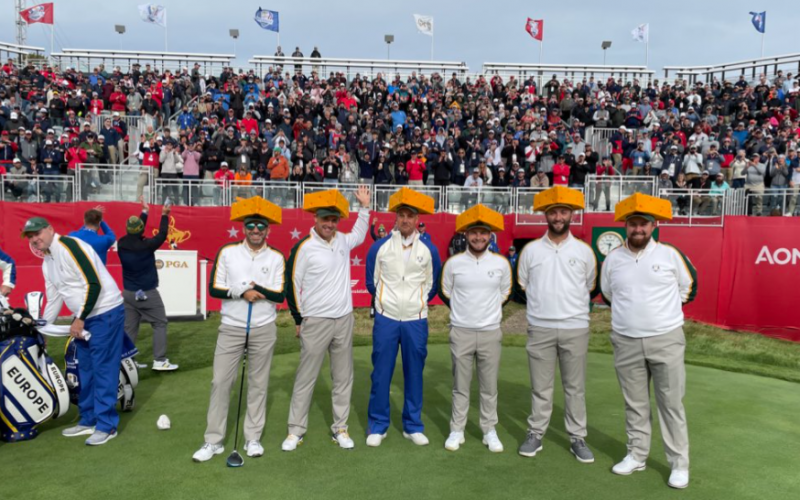 By Christopher Powers
Ever since fans were allowed back at sporting events, there have been a number of not-so-great fan-player interactions that have grabbed plenty of headlines. With enough alcohol involved, we (unfortunately) expect more of the same this week at Whistling Straits, site of the Ryder Cup.

So far, though, that has not been the case, as the fine folks of Wisconsin have welcomed the European Team with open arms. Just ask Ian Poulter, arguably the most-hated European player of the last 15 years, who says the American fans have been “wishing him well.”

In an absolutely brilliant move, Team Europe got the U.S. crowd on its side on Wednesday, arriving at the first tee in style, and by style we mean in cheeseheads, famously worn by Green Bay Packers fans:

Cheeseheads with green & yellow on the first tee in Wisconsin.#TeamEurope knows what they’re doing. pic.twitter.com/wEbWByzRTI

Nice touch. An even nicer touch, as you may have noticed, is that the uniforms are actually Packers-inspired, too. Two days after a huge win over the Detroit Lions, you can’t play to a crowd much better than this:

The funny thing is, this obviously wasn’t just a last-minute decision. As European captain Padraig Harrington explained, this has now been years in the making, long before the Packers smacked around the lowly Lions Monday night.

“It’s 18 months ago at least,” Harrington said. “Maybe two years ago at this stage, when you’re going through the clothing with Loro Piana, you’re looking at the different colours. As I said, the first — the obvious one, ‘Oh, do you want to wear some green for Ireland?’ I’m thinking, Well, look, this is a European team. Let’s do something different.

“And then I said, Well, why not recognise Wisconsin where we’re going to play, and it fit in very nicely then to go with the Green Bay Packers.”

Harrington also said the Packers were a big help, and that they even supplied the cheeseheads for the Euros. They gained a new fan for life with that move.

It’s official – Padraig is welcome back to Wisconsin anytime he wants. But maybe stay away from Boston for a little while.

Collin Morikawa took us inside the U.S. team room by sharing what his teammates are really like

Even in defeat, Team Europe finds purpose in playing for each other

Rory McIlroy breaks down crying on TV amid American rout