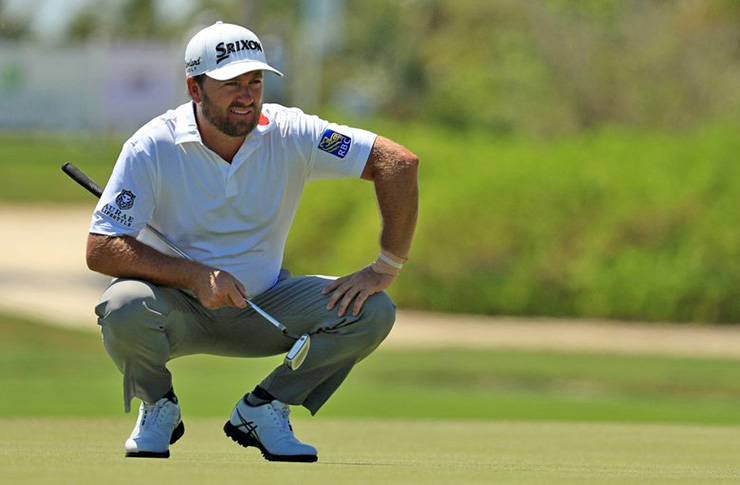 PUNTA CANA, DOMINICAN REPUBLIC – MARCH 31: Graeme McDowell of Northern Ireland lines up a putt on the seventh hole during the final round of the Corales Puntacana Resort & Club Championship on March 31, 2019, in Punta Cana, Dominican Republic. (Photo by Mike Ehrmann/Getty Images)

By E. Michael Johnson
Graeme McDowell is proof that someone who doesn’t bomb the ball still has a puncher’s chance. In winning the Corales Puntacana Resort & Club Championship, McDowell averaged just 286 yards off the tee, but hit enough greens in regulation and then converted enough putts to win his fourth PGA Tour title and first since the 2015 OHL Classic at Mayakoba. In fact, McDowell has an affinity for courses near the water, with his other two wins coming at the 2010 U.S. Open at Pebble Beach G.L. and the 2013 RBC Heritage at Hilton Head G.L.

McDowell was a stroke behind Chris Stroud, but had a purpose as he went to the par-3 17th. “I was standing on the 16th green and said to myself, ‘You have to do something that is tournament winning’ ” said McDowell. “The shot on 17 was tournament-winning level.”

Indeed it was. McDowell struck a 6-iron on the 176-yard hole to within five feet and converted the putt, creating a two-shot swing and flipping the board on Stroud, who bogeyed. When both bogeyed the 18th, McDowell had the win.

“I’d been struggling with medium and long iron play all week,” McDowell told Golf Channel afterwards. “It was a perfect 6-iron, a perfect number for me and when it came off the bat I knew it would be pretty good.”

Indeed it was. McDowell hit 52 of 72 greens in regulation, ranked T-16, with his Srixon Z 745 irons, a model he has used for some time. The shafts in the clubs also have stood the test of time with McDowell. He has used Project X 6.5 Flighted shafts for well over a decade.

Another key club was his putter, Odyssey’s white Hot 7, the same model he won the U.S. Open and his other two PGA Tour wins with. McDowell led the field in putts per green in regulation. The club, which is 34 inches long with 4 degrees of loft means a lot to McDowell, who told Golf Digest in 2016 that, “It holds a lot of good memories. I tried a different putter last year, but then I went through a process of simplifying things. Going back to old faithful was a big part of that.”

And a big part of this win, too.