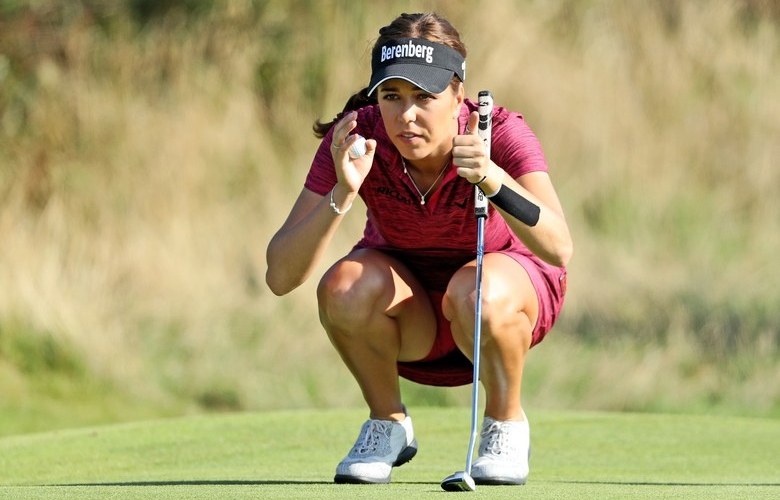 David Cannon
LYTHAM ST ANNES, ENGLAND – AUGUST 05: Georgia Hall of England lines up a birdie putt on the 13th hole during the final round of the Ricoh Women’s British Open at Royal Lytham and St Annes Golf Club on August 5, 2018 in Lytham St Annes, England. (Photo by David Cannon/Getty Images)

By E. Michael Johnson
Georgia Hall, a 22-year-old from England, made her first win on the LPGA a memorable one as she captured the Ricoh Women’s British Open for not only her first LPGA win, but a major held in her homeland at Royal Lytham & St. Annes.

Hall opened with a birdie at the par-3 first and it proved to be a harbinger as she produced six birdies during a final-round 67 that gave her a two-shot win over Pornanong Phatlum. Hall was relentless in her play, opening with 48 straight holes without a bogey before finally making one on the 13th hole in the third round. For the week she made just three against 20 birdies.

Hall hit an impressive 72.2 percent of her greens in regulation with her split set of Callaway Apex 3- and 4-irons (which she added to the bag this week) and her Callaway X Forged 18 5-iron through pitching wedge. Her Callaway Mack Daddy wedges also helped keep her card relatively clean as she was a perfect seven-for-seven in sand saves.

She used her Callaway Rogue fairway wood to reach the par-5 15th in two, setting up a birdie to bring things even with Phatlum, then took the lead alone when she used her Odyssey White Hot RX Rossie putter to roll in a 20-footer for one final birdie at the 16th. The putt brought to mind a comment Hall made after the third round when she said, “I holed a lot of putts, a lot of 20-footers, as well.”

One last one on Sunday gave the home fans something to cheer about.