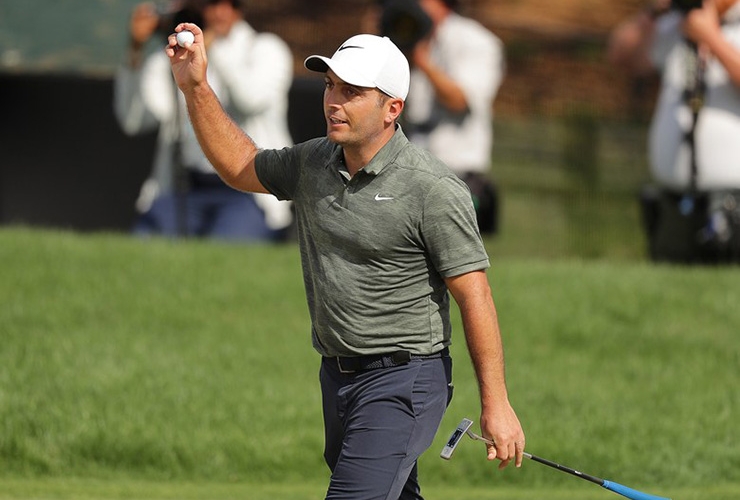 ORLANDO, FLORIDA – MARCH 10: Francesco Molinari of Italy waves after making a putt for birdie on the 18th green during the final round of the Arnold Palmer Invitational Presented by Mastercard at the Bay Hill Club on March 10, 2019, in Orlando, Florida. (Photo by Richard Heathcote/Getty Images)

By E. Michael Johnson
Francesco Molinari enjoyed what he called, “My best putting round ever” and used his wizardry on the greens Sunday to produce a final-round charge that tournament-founder Arnold Palmer would have been proud of to win the Arnold Palmer Invitational by two strokes over Matthew Fitzpatrick after a final-round 64 at Bay Hill Club & Lodge.

Starting the day five shots back of third-round leader Fitzpatrick, Molinari went to work right off the bat, rolling in a 21-footer for birdie on the first, then following that up with a seven-footer at the third and a 15-footer at the sixth, before holing out from near the grandstand behind the eighth hole for yet another birdie. At the 13th an 18-footer that went down for his sixth birdie of the day but all of that was overshadowed by the sweeping left-to-right 44-footer—the longest putt made on that hole all week—went down for an electrifying finish to an eight-under-par 64. In all, Molinari holed 146 feet of putts on the day, helping him pick up four-plus strokes on the field on the greens. For the week, he ranked fourth in strokes gained/putting, picking up almost seven strokes on the field.

Earlier in the week, Molinari officially signed an endorsement deal with Callaway Golf and used the company’s Odyssey Toulon Madison Stroke Lab putter, which features a shaft made of steel and graphite along with a counterbalanced grip for more stability and consistency.

Understandably so after a career year in 2018, Molinari had some apprehension about benching the Bettinardi putter he had so much success with. “Last year I had a very good putting year by my standards and that was one of the clubs I was a little bit more nervous about, but the switch was really easy,” Molinari told Golf Digest earlier this week. “The head is similar to what I had last year with the big difference being the shaft. That’s been a pleasant surprise. On short putts, it feels very similar, but on longer putts, I can feel it’s more stable. Looking back, the shaft I had in my putter I could feel more movement in on longer putts. So I feel I’m delivering the clubface more consistently to the ball on longer putts.”

Molinari’s long game also was in top form, as he ranked first in strokes gained off the tee, and T-4 in accuracy on a course that demands it using Callaway’s Epic Flash Sub Zero driver. “The fact Callaway is investing so much in new technologies and investing in finding solutions to improve their clubs meant quite a but to me,” Molinari said. “But it’s about the performance. I’m using the Epic Flash Sub Zero head and this driver along with the ball is meeting my performance expectations.”

As there always is with players switching equipment companies after successful seasons, there were some who questioned Molinari’s overhaul of his golf bag (which included a ball change as well). In his post-round comments to NBC, Molinari addressed such talk, saying, “I’m happy to see the switch I made wasn’t as crazy as some people thought. The clubs are good for me and I showed that this week.”