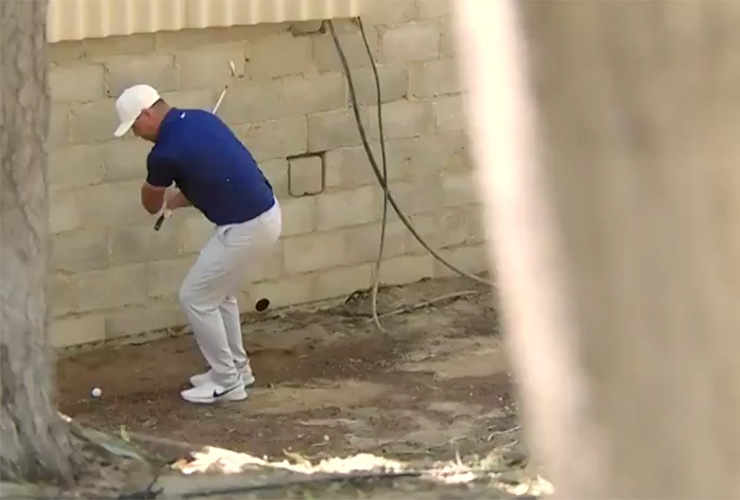 By Christopher Powers
After opening 2020 with a 66 at the Abu Dhabi HSBC Championship, Brooks Koepka appeared human on Friday, shooting a a three-over 75. Given this is his first start since withdrawing from the CJ Cup due to a knee injury in October, it was natural to wonder if any lingering pain was a factor that led to the second-round stumble. Koepka wasn’t having it.

Koepka’s blunt assessment of his play is exactly what you’d expect from him, and judging by a few highlights from his round, he’s absolutely right. He made four birdies, three bogeys and a pair of doubles, and had to hit a few punch-out shots that would make Club Pro Guy proud. Thanks to some brave cameramen, two of those punch-outs were captured on video, and in slow-mo, and they’re both (overused word to describe great videos incoming) equally mesmerizing to watch:

The man behind this camera absolutely deserves a raise. World No. 1 hitting the shot or not, that’s still a dangerous place to stand. Unfortunately, we didn’t get to see the result, but we did on another punch out from later in his round. You don’t even realize Koepka was going for the green until the camera cuts to his ball on the green on this one:

Mickelson-esque. And they say these bomb-and-gougers have no imagination anymore. These two sideways-punch-outs from the four-time major winner prove otherwise.

And to you, unknown cameraman in the desert, thank you for your courage.