By Dave Shedloski
MELBOURNE — Tiger Woods did his job as a player Sunday at the Presidents Cup. Then he put on his captain’s hat and watched the rest of his team finish their job at Royal Melbourne.

The American juggernaut, kept in check through the first three days by an inspired International team, overwhelmed the hosts in singles, capturing eight of 12 points for a 16-14 victory that had Woods choked with emotion. The man whose career has been defined by his individual brilliance was crying tears of joy after orchestrating a team triumph that was much more difficult than most would have imagined.

Of course, he still contributed with impeccable play, winning all three of his matches in helping the U.S. become the first team to win the Presidents Cup after trailing going into singles. He led off by handling Abraham Ancer, 3 and 2, and finished as the only unbeaten and untied player on either team. It was hard to argue he wasn’t the man of the match.

It was the perfect ending of the year for Woods, one in which he won the Masters for his first major title in more than a decade and then later captured his 82nd PGA Tour title in Japan to match Sam Snead’s all-time record.

At 43 the youngest captain in Presidents Cup history and only the second playing captain, he wasn’t about to take all of the credit, though.

“We did it together,” Woods, sniffling, said after the victory was secured by Matt Kuchar in the penultimate match. “We came here as a team. My teammates and my boys all played well. The [assistant] captains did an amazing job of just being there for every little detail. I couldn’t have done it without all their help and all my boys. They did it.”

Kuchar gets credit for the winning point, or, in this case, the half-point, that pushed America over the top. After falling 3 down after three holes to South Africa’s Louis Oosthuizen, Kuchar sank a five-foot putt on the 17th hole to go 1 up. Because he could do no worse than tie, that stoke ensured that the U.S. would retain the cup for the eighth straight time. 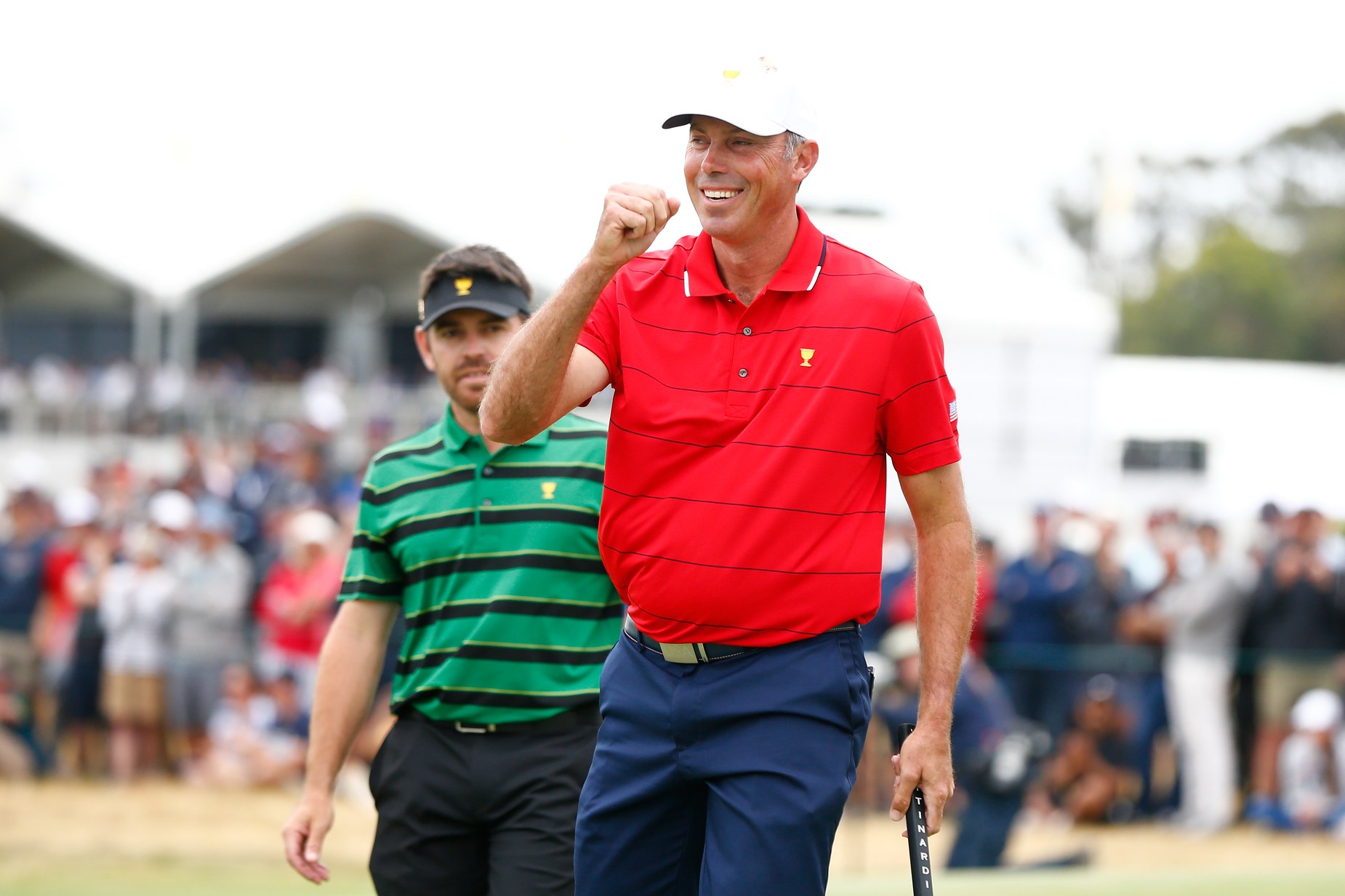 But so much work already had been completed by the Americans in front of him. The U.S. won six of the first 10 matches and halved two others. Overall, the International team could count just two wins, by rookies Sungjae Im of Korea and Australia’s Cameron Smith.

“We were right there at the end, but just a couple of matches didn’t go our way,” said a dejected International captain Ernie Els, whose side led 10-8 on Saturday, only the third time the Internationals had held a lead through the team sessions. “The Americans just played really great golf. They made the putts when they needed to, and they got some crucial wins throughout the day.

Perhaps closer only made it harder to swallow.

“I’m optimistic about the future, and I can’t wait to play in one of these again in two years,” said Adam Scott, who has yet to be part of a winning team in his nine starts. “But at the moment it’s hard to digest. It’s incredibly disappointing. We had a good game plan, and it was working.”

Until it didn’t. Which became obvious very early on another overcast day. The Americans wasted no time nosing ahead. They put the first three points on the board and never trailed thereafter.

Leading off, Woods found himself in a back-and-forth tussle with Ancer, who played impressively in his debut. But the Mexican was no match for the No. 6 player in the world on the inward nine, succumbing to a series of brilliant iron shots and clutch putts. Woods, who converted seven birdies, finished off Ancer in style by guiding home a pure 20-footer for birdie at the 16th for the first American point.

Woods, 7-2 in singles, registered his 27th victory, surpassing Phil Mickelson for most wins in Presidents Cup history. Woods finished undefeated for the second time in his nine appearances. In his three trips to Royal Melbourne, he was a member of the only losing U.S. team, in 1998, and scored the winning point in 2011. This week, he put an exclamation point on things.

“My responsibility as a player is whenever the captain said to go out and play, go earn a point,” Woods said.

And the points kept rolling in. Dustin Johnson, playing the fourth game but finishing soon after Woods, led from the third hole and beat China’s Haotong Li, 4 and 3, bringing the matches to a tie for the first time since the outset.

USA took its first lead since it won the opening match, and wouldn’t you know it would be Patrick Reed doing the honors by blitzing C.T. Pan, 4 and 2, for an 11-10 edge. Reed birdied his first four holes and six of his first seven for a 6-up lead, and although Pan fought back with four wins, he was just too far down to catch Reed, who had his swing coach, Kevin Kirk, on his bag. Kirk stepped in for Kessler Karain, Reed’s brother-in-law and regular caddie, who got into an altercation with a fan on Saturday and was not allowed to work the singles match.

“The biggest thing we did today that we didn’t do earlier in the week is, we didn’t get on top,” said Reed, who won his first singles match in the Presidents Cup. “Today was a new day. I knew coming out that I had to go out and play golf, especially going out early. Had to go out and get red on the board and earn my point and try to keep momentum on our side and get the guys going.”

The Internationals finally got on the board when rookie Sungjae Im of Korea beat U.S. Open champion Gary Woodland, winning five of the last seven holes for a 4-and-3 decision.

After Bryson DeChambeau and Adam Hadwin tied, the Americans went on a run. Patrick Cantlay and Xander Schauffele, who played together in all four team sessions, got wins against Joaquin Niemann and Scott, respectively. Then Webb Simpson earned his first victory of the week by dispatching former U.S. Amateur champion Byeong Hun An, 2 and 1.

Simpson’s point ensured that the U.S. would do no worse than share the cup.

Aussie Cameron Smith, one of a record seven rookies on the International team, kept hopes alive for that scenario when he rallied from 3 down to stun Justin Thomas, 2 and 1. It was the second match in a row that Thomas, the highest ranked player for either team at No. 4 in the world, couldn’t hold a big lead. He and Rickie Fowler let a 5-up lead to Ancer and Marc Leishman dissolve in foursomes, resulting in a halve.

“I don’t think I’ve ever been so excited and then kind of really gutted in the space of a few minutes,” Smith said.

That’s because Kuchar soon delivered the dagger that the Internationals had managed to stave off for much of the week. Playing in his fifth Presidents Cup, the former U.S. Amateur champion had been 0-4 in singles until halving with Oosthuizen. That he didn’t win was immaterial. He knew what the putt on 17 meant to the overall outcome, and he said that he felt like “leaping out of my skin with joy” at the moment.

“To do that was such a thrill and something I’m proud of,” said Kuchar, 41, the second-oldest player on the U.S. team behind the playing captain.

In the day’s final match, Fowler bogeyed the last hole to halve with Leishman. It was just a formality that determined the final margin.

Nothing was a formality as far as the U.S. captain was concerned. This meant a lot. You could see it on his face and the faces of the rest of the American contingent. You could see it in the heartfelt hugs he shared with his players and his three assistant captains. He was reveling in one more accomplishment. He tried to put it into context with the rest of his unparalleled career.

“It’s just so exciting for me to be a part of this,” he said, beaming. “It’s truly an experience I will cherish forever.”