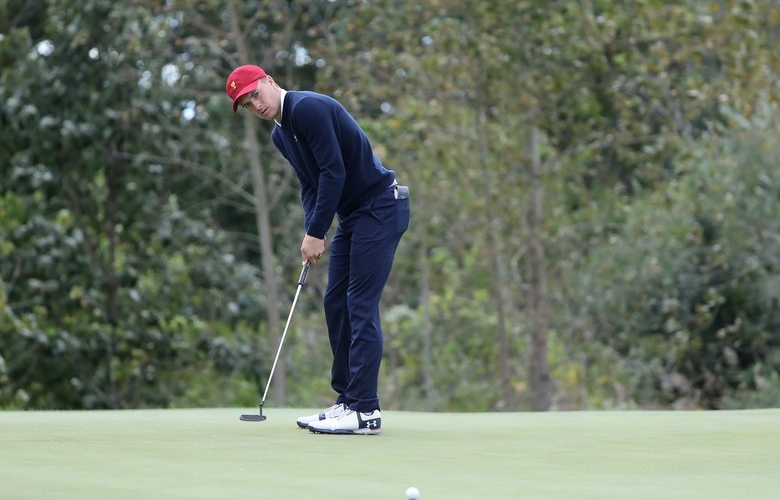 By Joel Beall
The theory that golfers should look at the hole instead of the ball during a putting stroke is not new: Dr. Bob Christina and Pinehurst’s director of golf Eric Alpenfels wrote on the subject in their 2008 book Instinct Putting. However, the practice gained popularity with Jordan Spieth’s rise to prominence, as the Texan frequently utilizes the method on short putts. Though some call Spieth’s approach a quirk (Louis Oosthuizen has occasionally looked at the hole as well), a new study from Canada validates the technique.

According to Sasho J. MacKenzie (St. Francis Xavier University) and Neil R. MacInnis (McGill), golfers achieve better results when looking at the line of a breaking putt rather than the ball. Twenty-eight golfers attempted putts of three different lengths using near-target (ball) and far-target (line) methods. Researchers discovered the FT method was associated with a significantly higher make percentage (40 percent) in comparison with the NT (37 percent).

The biggest discrepancy occurred at 10 feet, with FT achieving 39 percent to NT’s 34 percent. The FT method also had a closer miss distance compared to NT. The study was conducted on an indoor green, with the participants’ handicaps ranging from 6 to 16. Perhaps the biggest finding is that experienced golfers saw success as well.
“Experienced golfers, who normally putt using a NT strategy, were found to putt significantly better—both in terms of make percentage and miss distance—while employing a FT visual focus strategy on moderately sloped putts inside 14 feet,” the study claims.

The tests are far from conclusive; the study admits that future investigations should look into distances beyond 14 feet, and if certain factors predispose golfers to putting better with one of the visual focus strategies. Still, for those that struggle on the green, the FT approach may be your saving grace.