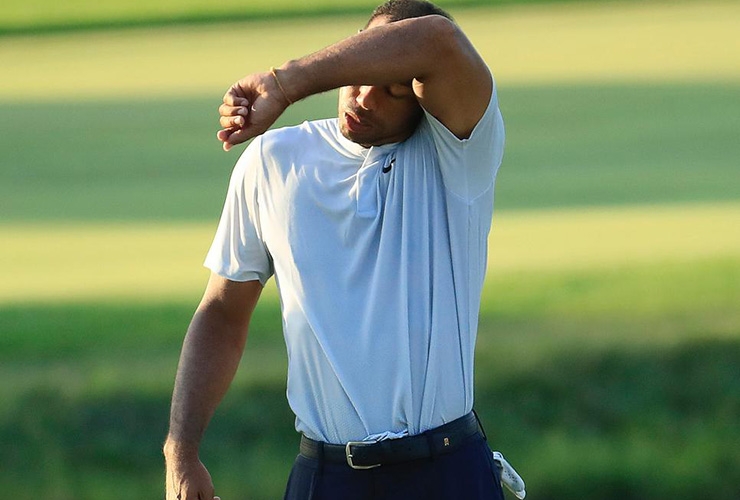 By Daniel Rapaport
OLYMPIA FIELDS, Ill. — Sometimes, golf taunts. Tiger Woods couldn’t buy a putt all day. When he needed them to drop, they wouldn’t, and he slid well down the leaderboard at the BMW Championship.

And then, when the round was already lost, a long-distance putt found the bottom. Of course.

Woods holed a 37-footer for par on 18 to shoot a five-over 75 on a second straight brutally difficult day at Olympia Fields. At eight over for the tournament and in a tie for 55th place, he will need a phenomenal weekend to snatch the top-five finish he needs to get into the top 30 in the FedEx Cup standings and qualify for next week’s Tour Championship.

And, yet, he’s only nine shots back of first—which is one under, the highest 36-hole leading total in a non-major PGA Tour event in more than six years.

Woods declined to speak to the media after the round, which gave new meaning to the word slog. Temperatures hovered around 90 degrees, with the humidity making it downright uncomfortable to be outside. The only reprieve from the swelter was the wind, but that made the golf course even trickier. All that, combined with a crisscross layout that forces players to wait over shots to not distract players on adjacent holes, made for a five-hour, 13-minute round.

For Woods, it must have felt like an eternity. 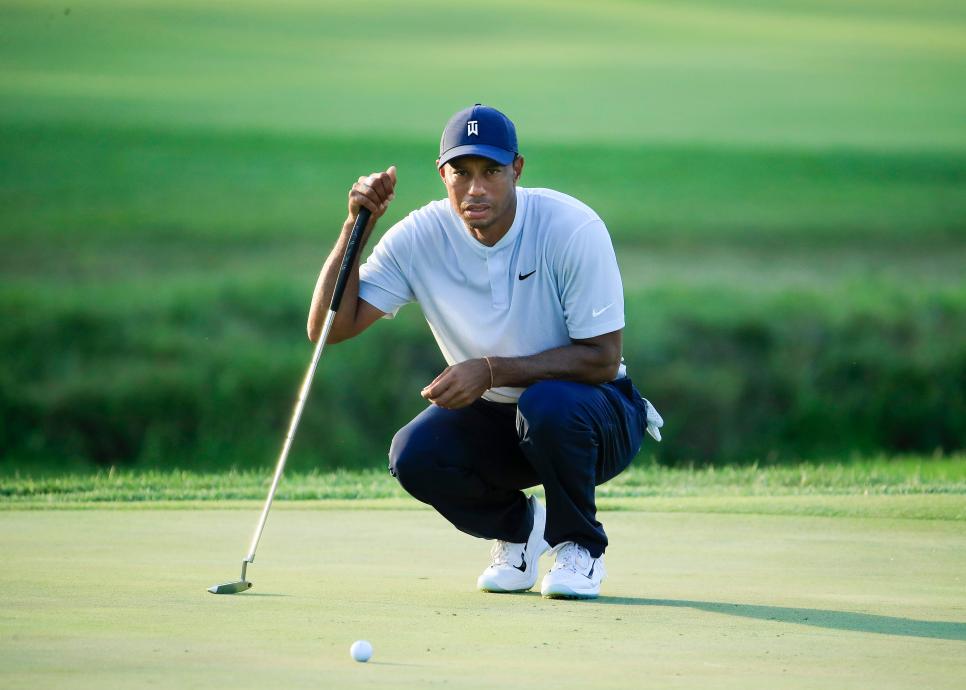 Andy Lyons
Tiger Woods lines up a putt on the 18th green during the second round of the BMW Championship.

He made four straight pars before a bogey at five, but at just one over through six holes he found himself actually creeping up the leader board. That is, until he made an absolute mess of the seventh hole. After air-mailing the green with his approach, he left his chip just short of the green, then putted to five feet, then left the five-footer … short. Woefully so. It was symptomatic of Woods’ continued struggles on the greens—despite making that 37-footer on 18, he still finished 58th out of 69 in strokes gained putting for Friday’s round and ranks 57th for the week.

Woods birdied the 11th before playing his next five holes in four over, which included missing two eight-footers for par. A birdie on 17 and that par save on 18 salvaged a semi-respectable round—the scoring average on Friday was 72.73—and Woods will be back early Saturday morning to continue his meandering search for momentum. Any momentum. It’s evaded him almost entirely since he returned from the COVID hiatus.

Still, even if Woods’ season ends Sunday—which looks rather likely—there is plenty to play for. With the Tour Championship a long shot proposition, Woods’ focus has surely shifted to the U.S. Open, which begins in less than three weeks at Winged Foot in New York. And there is no better preparation for a U.S. Open than playing a U.S. Open-ready golf course. Olympia Fields certainly qualifies, and Woods will get two more cracks at it.