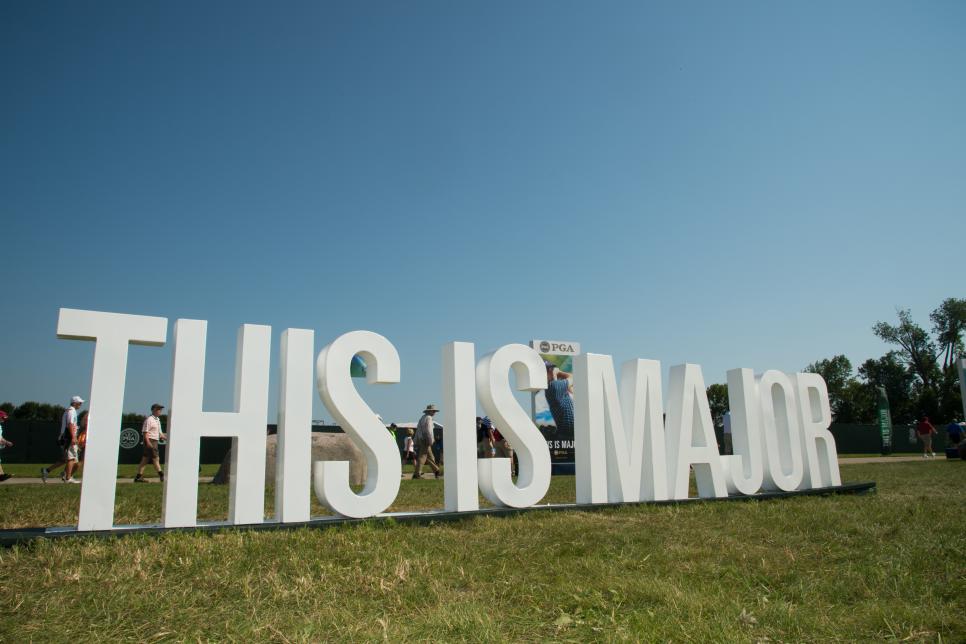 By Joel Beall
KIAWAH ISLAND, S.C.—There is a belief among artists that the moment you argue why you matter is the moment you prove the opposite. To critics of the PGA Championship, long considered fourth on the totem pole of the four majors, that moment arrived via marketing slogan: “This is major.”

Now, there is not enough space on the Internet or time on the calendar to run through the history of failed advertising campaigns, and against that endless ocean, “This is major” doesn’t make a wave. Conversely, imagine Augusta National, the USGA or R&A needing to remind the sport that their flagship events are, indeed, important. It was a slogan so hilariously on-point with its perceived swipes that it almost came off as parody.

That slogan has mercifully been abandoned, although it was still seen from time to time at PGA Championships on boards and tent fronts. But at Kiawah Island this week, there is no “This is major” signage. And rightfully so.

The PGA Championship comes into South Carolina on a heater. Once known for its lack of hype and sizzle, the tournament has quietly become one of the more dependably entertaining big-ticket events on the schedule.

For the longest time, part of this tournament’s identity was that it really didn’t have one. Or what it had, it didn’t want. The PGA bore the stigma of producing winners that did not age gracefully in history’s judgement, and that it occasionally visited less-than-prestigious venues. There were the “other” things. Think of Kenny Perry watching the final holes of the 1995 PGA in the CBS booth rather than keeping warm on the range and promptly losing in a playoff. Or the revival of the long-drive contest only for Bubba Watson to protest it. There was John Daly riding in a cart, the tournament visiting South Florida in August, Rich Beem’s victory dance, and the green-lighting of “lift, clean, in place” rules.

Still, instead of seeing the PGA for what it was, fans and media judged it for what it was not. So in that vein … it’s time for everyone to open their damn eyes.

Has the PGA produced run-of-the-mill winners? Yes; so have both Opens and (bracing self for lightning bolt) the Masters. This is also a championship that crowned Nicklaus and Hagen its victor five times, Tiger four titles, Snead and Sarazen three and Hogan with two. There have been underwhelming venues but also trips to meccas like Oakmont and Southern Hills and Oak Hill, and the PGA hasn’t been afraid to introduce modern wonders like Whistling Straits.

Of course that is the past, and we said heater, present tense. And the PGA is on a run. 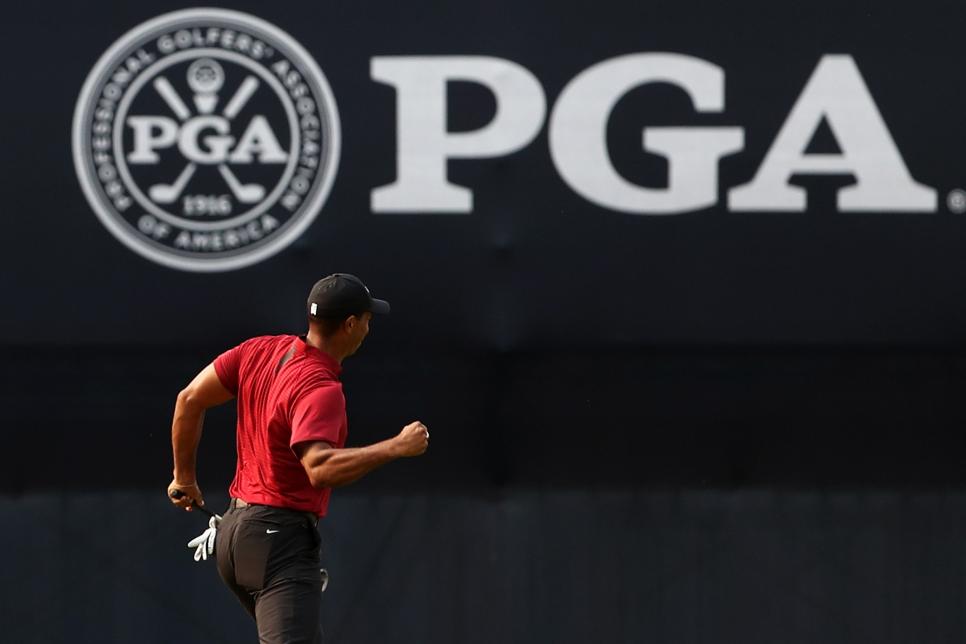 Jamie Squire
Tiger Woods reacts after making a putt for birdie on the 18th green during the final round of the 2018 PGA Championship at Bellerive Country Club.

Since it was last contested at Kiawah Island in 2012, only two winners—Jason Dufner and Jimmy Walker—were ranked outside the World top 15 entering the week, and Dufner was in shouting distance at No. 21. They’ve all been closely contested affairs: The margin of victory from the last eight PGAs is 15 strokes, total. The only runaway was Jason Day in 2015, as the Aussie won by three. For context, the U.S. Open’s total margin of victory has been 28 in that span, with five of the last seven decided by three strokes or more.

Though leaderboard tightness usually correlates to excitement, it’s not a guarantee. But that’s been the case as of late, and that excitement can’t solely be conveyed through score. There was Collin Morikawa’s lights-out weekend at Harding Park. Brooks Koepka building an insurmountable lead, nearly losing it as Bethpage collapsed on itself, then Koepka dusting himself off on the closing stretch. The scene of Tiger Woods coming in second but really finishing in first in St. Louis. There was Justin Thomas’ breakthrough at Quail Hollow and Rory McIlroy battling a host of contenders, including sunlight, at Valhalla to win his fourth. That, my friends, is a slate of fireworks.

Yes, some of that is dumb luck. Some of it is not. Credit Kerry Haigh, the PGA’s chief championships officer, who’s in charge of course setups. There is no integrity of par nonsense with him, circling a winning score aspiration and doing whatever it takes to get there. He sees what the course gives him and goes with it. He let Bethpage be a beast, allowed the nuances of Harding Park to speak for themselves, was fine with the field burning Bellerive to the ground. The resulting product is better for it.

There’s also reason to believe this run will continue. Due to the pandemic, this is only the second year for the PGA’s move to May. It is a move, however, the organization believes will strengthen the overall health of the tournament. After all, part of the reason the PGA was perceived as the fourth major was, well, it came last on the schedule. That point of the year, storylines can get exhausted or dried up, and some of the non-zealots turn to other sports. That worry is no more.

“It obviously shuts out certain parts of the country [for hosting] which is disappointing, there’s no perfect date for that,” said PGA of America CEO Seth Waugh. “We think it opens more than it closes. And we think the cadence of the schedule is just better. If it’s better for fans, I think it’s better for players. 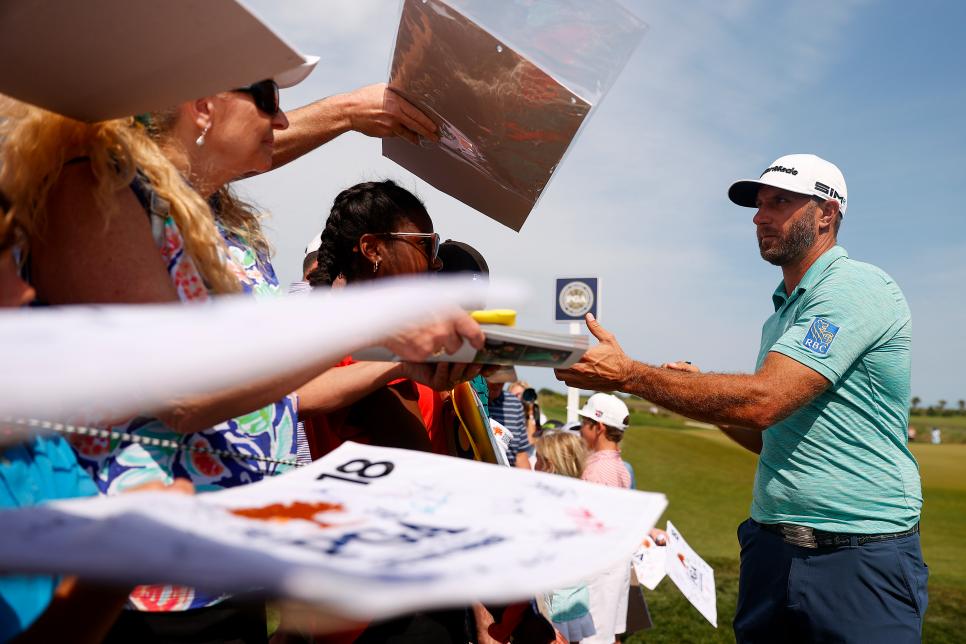 Maddie Meyer/PGA of America
Dustin Johnson signs autographs during a practice round for the 2021 PGA Championship.

“Obviously it’s exhausting for them to go April, May, June, July, and then if this year you’ve got an Olympics and then you’ve got a Ryder Cup and you’ve got a FedExCup in there; that’s a long grind. But as far as creating fan engagement and how it should work and how it’s given some breathing room to the Ryder Cup—and Olympic years are a little different—but to the Ryder Cup and to Presidents Cup and to FedExCup, we think it’s a better schedule for the players.”

As for some of the aforementioned oddities? In fairness, each major has its raps; the weather too often intervenes at the Open Championship, and the USGA often has the same problem for its national championship. And while there is some truth to those knocks—for what it’s worth, Daly was riding a cart Tuesday morning—perhaps too much weight was given to them. Besides, what some call oddities, others call colour and character.

Perhaps it’s fitting that Ocean Course is hosting this week. Thirty years after its rough debut, the layout has solidified its standing as one of the sport’s gems. You don’t have to squint too hard to see the symmetry.