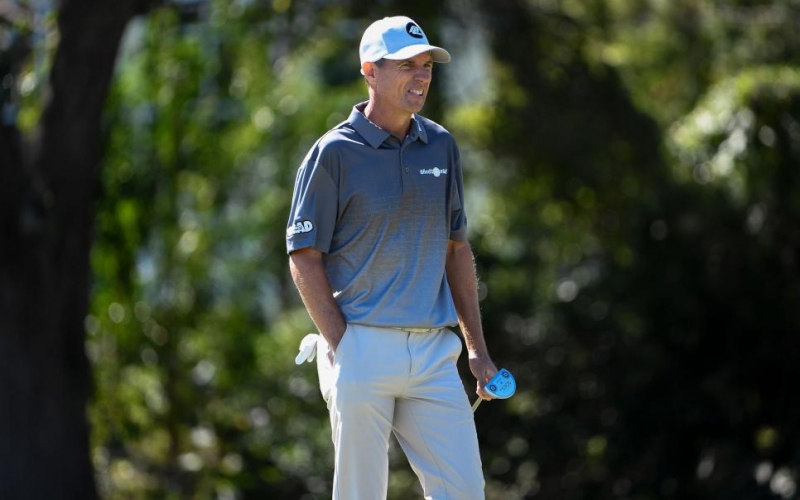 Biding his time on the Korn Ferry Tour until he turned 50 on July 28, doing the “hard yards” as he put it, Alker had been a frequent visitor to Champions Tour leader boards. Finally, he converted for his first win since he registered the last of his four Korn Ferry titles at the 2014 Cleveland Open.

“I guess it’s just been building,” said Alker, who made his senior debut after Monday qualifying at the Boeing Classic in mid-August and ran off six straight top-10 finishes to repeatedly earn a start in the succeeding event. “I’ve been having chances and … you have a bunch of top-10s and you get in the thick of it and just try to get a W. Not that the top-10s aren’t any good. It’s just that you get that win, and just glad I hung on today.”

Nursing a one-stroke lead heading to the par-5 home hole at The Old Course at Broken Sound, Alker finished off a four-under 68 in style with one last birdie to rally past second-round co-leaders Furyk and Tim Petrovic. Alker, who played only three seasons on the PGA Tour and never finished better than 17th, posted 17-under 199.

Furyk, seeking to cut significantly into Bernhard Langer’s lead in the season-long Charles Schwab Cup points race, sputtered on the putting greens and closed with a 71. Jimenez had seven birdies in a 66 for low round of the day.

Petrovic struggled to a 74 after an early birdie had staked him to a two-stroke lead and ended up five back at 212. He tied for fourth with Ernie Els, who shot 71.

With a final-round 69, Langer was T-11 and remained in front in the points standings heading into next week’s Charles Schwab Cup Championship, the last start on the extended senior schedule spread over two years because of the coronavirus pandemic. The season finale is in Phoenix, Ariz., at Phoenix Country Club, and Langer will be trying to win the Charles Schwab Cup for a sixth time.

“I would have loved to have won this event and then really made it probably a two-man race with Bernhard and I,” Furyk said. “Now there’s a lot more work to do.”

After qualifying for the three-event playoff in just seven starts, Alker needed a strong showing at the opener, the Dominion Energy Charity Classic two weeks ago, and his T-4 enabled him to advance to the TimberTech Championship. He enters the 36-man Charles Schwab Cup Championship in 22nd place after starting on the outside at 46th in the points race.

With a check for $305,000, the Kiwi has earned $896,207— more than he made in his PGA Tour career—in just nine tournaments since he qualified for the Boeing Classic outside Seattle in late August for his PGA Tour Champions debut.

Needless to say, he has surpassed his own expectations.

“I thought, well, if I can come out and do many some Mondays, Tuesdays, do some events and try to qualify and get some events under my belt, that would be great,” he said. “To be standing here and talking to you guys with a win, it’s amazing.”