By John Huggan
“Dark” since March 23, golf in the United Kingdom is on the way back. In bits of the four-part state at least. While courses in Northern Ireland and Scotland are to remain closed, those in England will re-open Wednesday, with Wales expected to follow suit on May 18. Which will no doubt come as something of a relief at Llanmynech Golf Club. The course where former Masters champion Ian Woosnam spent his formative years has 15 holes in Wales and three in England.

As is the case in the United States as a condition of courses re-opening, social distancing and other restrictions will be in place—no touching the flagstick, smoothing sand in bunkers with feet, clubhouses and professional shops closed. While initial reports said that golfers in England could only play alone or with members of the same household (those they’ve been quarantining with), according to England Golf, one person from a different household will be permitted in a group. But most venues will insist on the pre-booking of tee times, with players encouraged to arrive shortly before they start, then leave as soon as rounds are over.

All of which sounds fair enough, especially to those starved of their golfing fix for almost two months. But others have pointed out that such a plan does little or nothing to address the ongoing problems faced by many golf clubs across the U.K. Solo golfers or those playing alongside family members will bring no income to clubs, which will presumably have to maintain their courses to a level not recently required. Inevitably, that will involve extra expense.

All of the above is coming about at the behest of the U.K. government led by Prime Minister Boris Johnson. North of the border, however, Scottish Golf is following instructions from local authorities, specifically Scotland’s First Minister, Nicola Sturgeon, who is preaching a more cautious approach. (Health and sport administration are delegated from the London-based U.K. government to the Scottish Parliament in Edinburgh).

“Scrapping the ‘stay-at-home’ message could confuse people,” says Sturgeon, explaining the government’s position. “Extreme caution is required at this critical juncture to avoid a rapid resurgence of the virus. It is not an exaggeration to say decisions now are a matter of life and death. That is why they weigh so very, very heavily and why they must be taken with great care, and it is why as I take them I will continue to err on the side of caution.”

So, as Scotland enters its eighth week in “lockdown,” all courses will remain closed, at least in the short term. 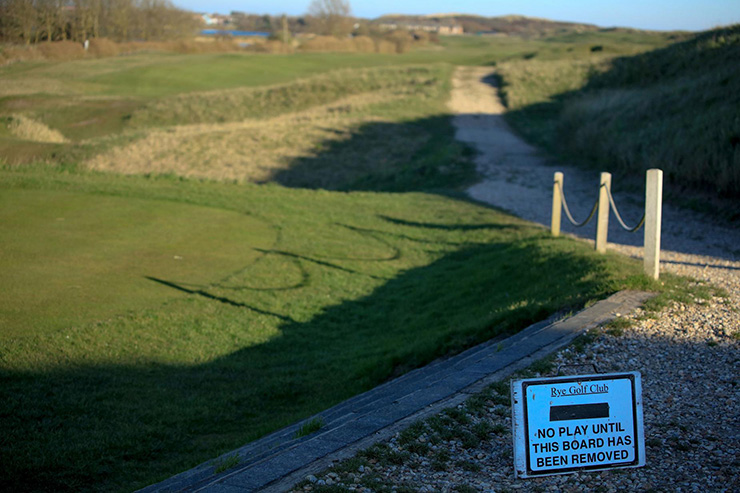 As was the case in the United States, different rules for different parts of the U.K. have caused no end of debate. And, as in the U.S., just about every option from outrage to complete acceptance is represented. Some even see both sides of the argument.

“Right now, we are being told that it isn’t safe to play golf,” says one golf club owner in Scotland, who asked not to be identified. “I get the frustration many feel when they hear that. Why is it you can go for a walk on the course with your dog, but you can’t play golf? That doesn’t make an awful lot of sense to me.

“Then again, from a business point of view, I don’t want our facility open if it isn’t completely safe for the staff,” he continues. “I’m not sure I’d be that happy going back to work at my course at the moment. That is costing us money, but so be it. It is better to be a little bit too cautious than get back out there too early. So I’m in both camps. I’d love to go out for a game with my friends today. But I get why we’re not doing so. If it’s not safe, I don’t want to do it.” 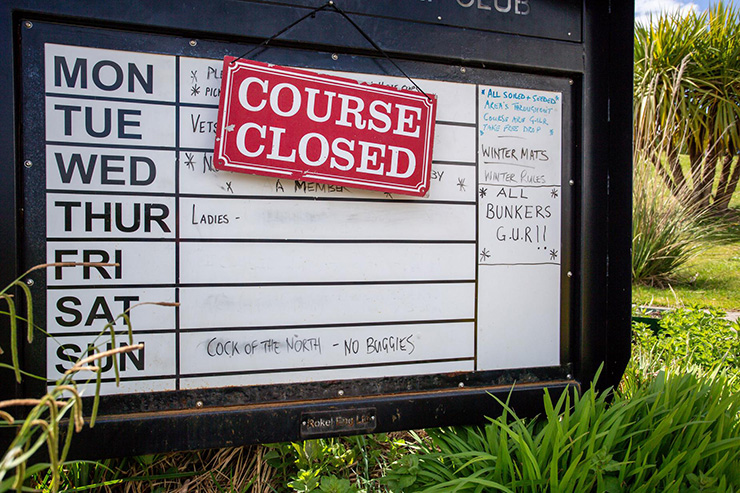 Course closed sign displayed at the entry to the Blackwood Golf Club House in Wales. Golf restrictions are being eased in England on Wednesday, with Wales re-opening on Monday, but remain in Wales on May 11, 2020 in Blackwood, Wales, United Kingdom. The prime minister announced the general contours of a phased exit from the current lockdown, adopted nearly two months ago in an effort curb the spread of Covid-19. Photo by Huw Fairclough

Still, perhaps nowhere are the implications of this contrasting situation more acute than in the Border region in the south of Scotland. Take Eyemouth Golf Club in Berwickshire. Only nine miles separate the (closed) course from the (open) Magdalene Fields Golf Club, which sits just north of Berwick-upon-Tweed and, more importantly, just inside England. Such a situation clearly brings with it dire financial implications for the affected clubs.

“A lot of clubs in the Borders are struggling,” says Ian Ford, the 1977 British Boys champion and a former captain of Kelso Golf Club, which sits only ten miles from the English border. “I know many people who haven’t paid their annual subscriptions yet. More than 50 at Kelso are in that position. I understand where they are coming from though. They are waiting to see what is going to happen. And they are wondering if they are going to have jobs at the end of all this. But that’s about £20,000 the club has lost, at a time when we have no income at all.”

The numbers get much bigger when considering the economic impact on courses where visitors provide the vast majority of annual income. For example, those making the pilgrimage to St. Andrews make up 90 per cent of the on-course traffic and normally bring in around £10m per annum. Most of that occurs in high-season between April and October. So with little prospect of international visitors this year that’s a big financial hole for the Home of Golf to fill.

There are worries too, that, while most players will adhere to the new guidelines, some will flaunt rather than follow. Which is why, in Germany, strict guidelines and penalties are in force.

Players are asked to book times—for twosomes playing nine holes—the day before they want to tee-up, at a minimum. Each caller must speak to a club representative, at which time the rules and penalties are spelt out. Both have to arrive 10 minutes before their time, then leave 10 minutes after they finish playing. If they don’t show up, they will be banned from booking a time for a period of one week. And if they fail to appear a second time, they will be suspended from the club for a month. A third offence means they won’t be playing again until 2021.

There’s more. Should anyone break social distancing rules, the club would incur a fine of €400 for a first offence. A second breach carries with it a fine of €5,000. And if it happens for a third time, the course is closed down for the rest of the year.

Across the Irish Sea from Great Britain, however, there is happier news. Courses in the Republic of Ireland are scheduled to open on a restricted basis on May 18. In the first phase of a five-point plan, members who live within five kilometres of their club will be able to play in three-balls at 14-minute intervals, two-balls over 12-minute intervals, or as individual players every 10 minutes. If that goes well, club competitions will return June 8, with the “inclusion zone” extended to 20 kilometres. Visitors will be allowed to play starting June 29. Restrictions will continue to be relaxed until—should all go well—something akin to “normal” life with all facilities open will resume by Aug. 10.

That all sounds straightforward, but complicating matters— at least in the short term—is that many clubs in the north of Ireland have members residing in Northern Ireland. So, while those living in the Republic more than 5 kilometres from their home clubs will be deprived of the opportunity to play, members living in the U.K.-run part of the Emerald Isle will be free to drive in from farther afield and tee-up.

Hey, no one said any of this was going to be easy or straightforward, no matter where you live.