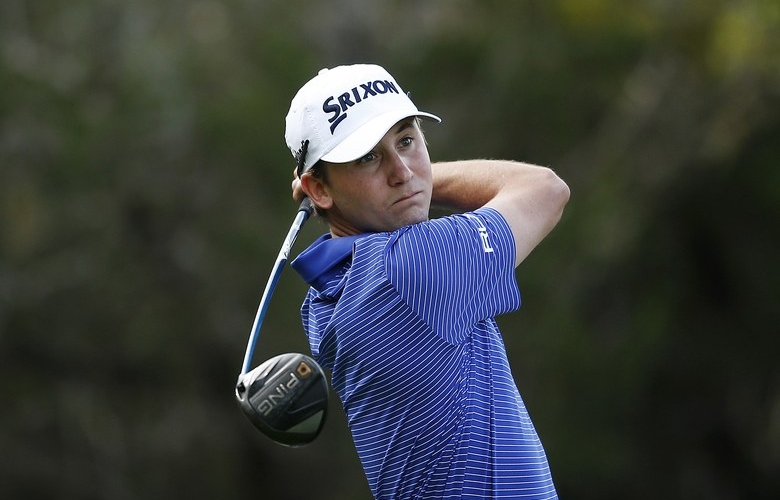 By Brian Wacker
First place in last week’s South Carolina Open, a 54-hole mini-tour event on the GPro circuit, was $10,000. Smylie Kaufman didn’t win, but he did shoot what he figured was his first bogey-free round in two years, a four-under 68, in the second round.

Augusta National is less than 90 miles away from Columbia Country Club, but it might as well have been on another planet. Three years ago, Kaufman entered the final round of his first Masters a stroke off the lead and playing alongside his good pal Jordan Spieth. Of the 30 players who made the cut last week, Kaufman finished 24th. His haul: $820.

“That was a big step, that he was willing to go,” said Kaufman’s off-again/back-on-again coach, Tony Ruggiero. “If he continues to do stuff like that and just go play, he’ll be OK.

This week, Kaufman is back on the PGA Tour, at least temporarily. With only past champion status—the equivalent of essentially no status—he’s in the field at the Shriners Hospitals for Children Open in Las Vegas. It was there four years ago when Kaufman’s meteoric rise began in earnest after a surprising final-round 61 propelled him to victory in just his fifth career start.

Life sped up from there: A few months later, that Masters; then the Instagram famous SB2K16 trip to the Bahamas with shirtless shenanigans alongside buddies Spieth, Rickie Fowler and Justin Thomas.

But while the rest of the group’s collective star would continue to shine, Kaufman’s flamed out fast. In 2017-’18, he missed 18 cuts in 22 starts and withdrew once.

Plagued by an elbow injury, Kaufman took a major medical extension and had five starts last season to earn enough FedEx Cup points to keep his card. He missed the cut in four of them and finished 71st in the other. Exempt into the Korn Ferry Tour Finals, he then racked up two more missed cuts before withdrawing from the final event.

Along the way, he spoke of the dark side of social media, saying that it “sucks.” He took a self-imposed sabbatical from Twitter and Instagram for a couple of months and has tried to remain vigilant in that restraint. To wit, over the past 12 months he has posted to Instagram just 25 times, a handful of them superficial sponsor-related posts. By comparison, in the year following his lone PGA Tour victory he had posted more than double that.

Instead, he has tried to focus on enjoying life and the process of finding himself and eventually his game.

That’s where Ruggiero comes in.

The two hooked up again after Kaufman texted him following a missed cut at the KFT’s stop in Boise at the end of August.

“He was pretty lost, which is easy to fall into out there,” Ruggiero said. “My thought was, why try to reinvent the wheel.”

Ruggiero noticed a lot of knee action and lateral movement had crept into Kaufman’s move, along with too much face rotation of his club as his arms tried to create all the speed in his swing. So he sent the 27-year-old a few videos of his swing from his senior year at LSU and his first couple of years on tour.

“When he played his best he turned around his spine,” Ruggiero said. “He’d always been a player who was centered, stable and connected to the ground. So we’re trying to get his knees and lower body to be quieter, with his stance a little wider, the ball up in his stance and just let his hips turn.”

That said, Ruggiero didn’t want Kaufman to get overloaded with a bunch of swing thoughts this week so their work on the range was minimal. They instead spent Monday and Tuesday together with most of the focus on Kaufman playing. Ruggiero walked 11 holes with him on Tuesday as he played alongside Sepp Straka. Kaufman didn’t miss a fairway on the back nine at TPC Summerlin, according to Ruggiero, and made a few birdies along the way as well.

It was a step in the right direction. But the first of what figures to be many as Kaufman tries to work his way back to the PGA Tour.

“Golf swing-wise, he’s trending in the right direction,” Ruggiero said. “I think he’s in a good place for turning things around. The key is tempering expectations. He can’t get to the place he’s trying to get to in a week.”