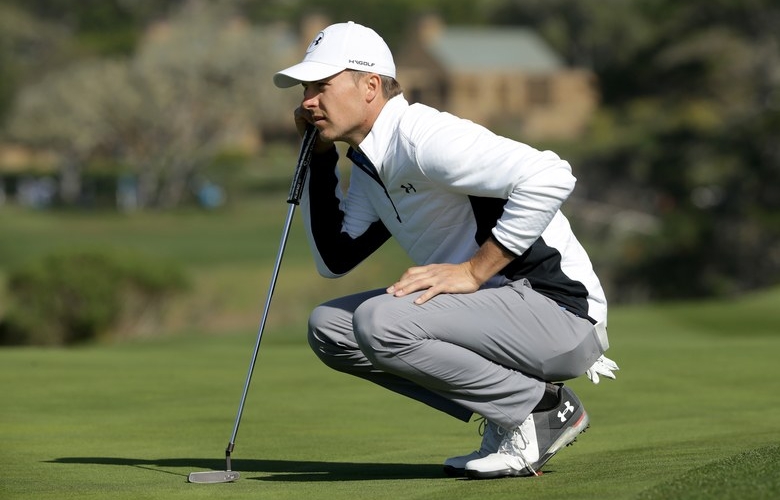 By Luke Kerr-Dineen
It’s a Ryder Cup year which means—right on cue!—the U.S. team’s best putter is going through the worst putting slump of his career.

In five starts this season Jordan Spieth ranks 161st in strokes gained: putting and has admitted he’s going through a “slump” on the greens. A T-9 finish at the Genesis Open last week have allayed concerns slightly, but his lowly ranking is still turning a few heads. What should fans make of all this? Should they be pressing the panic button? And what should they expect next?

The short answer is that worst of Spieth’s putting slump is probably over, but don’t be surprised to see the effects linger for some time yet.

But averages are averages, after all, which means periodic slumps are inevitable. The trick isn’t eliminating slumps (which would be impossible), it’s about making those slumps as short and shallow as possible.

Here’s a chart of Spieth’s week-by-week SGP performance in every official PGA Tour event over the course of his career for which data is available. I’m defining “slump” as two or more consecutive starts where Spieth’s SGP never reached positive territory. So far in his career, Spieth has had four such putting slumps, which I’ve circled below: 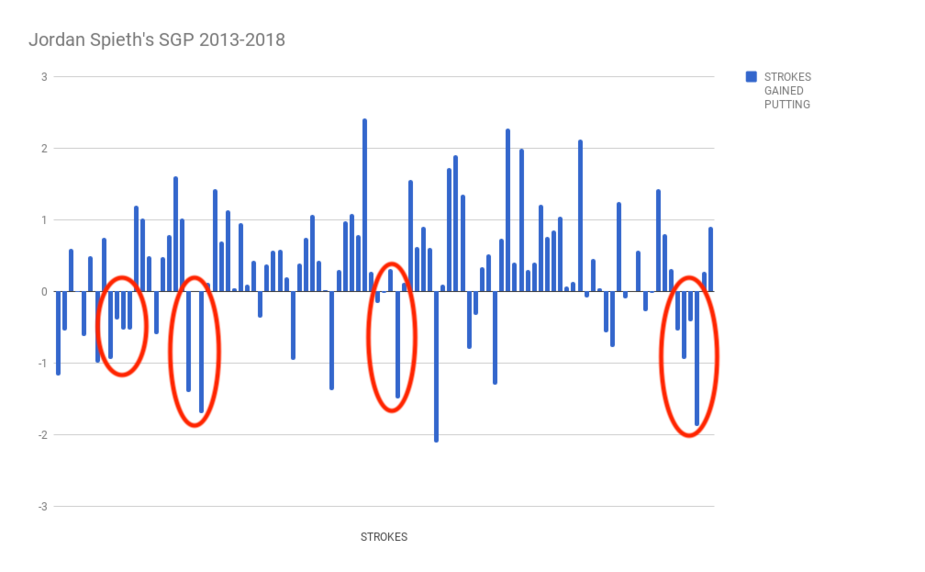 Golfweek’s David Dusek wrote an insightful piece a few weeks ago pointing out that Spieth tends to struggle on the greens early in the season. That trend is certainly at play again this year, but it doesn’t provide a complete explanation. Indeed, based on what we’ve seen so far, the hangover from Spieth’s latest may linger for some time. Here’s why: 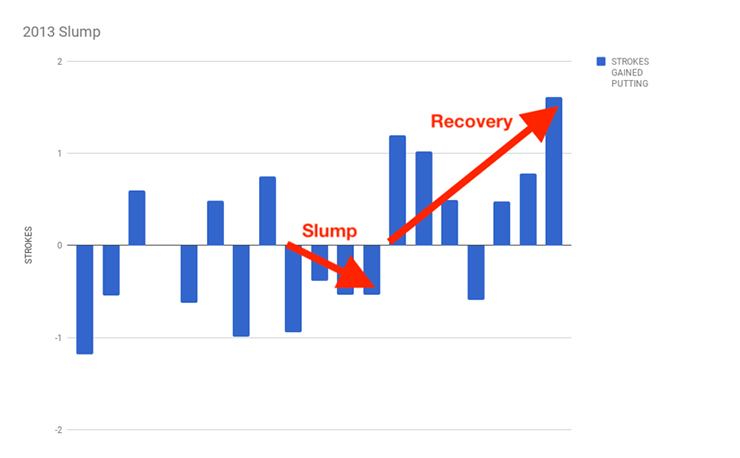 In 2013 Spieth was a young rookie adapting to life on the PGA Tour—and that’s exactly what how his putting stats read. Streaky putting to start the season gave way to a four-week putting slump in May where he averaged -0.601. He quickly rebounded; six positive putting performances in his next seven starts meant he finished the season within touching distance of his eventual career SGP average. 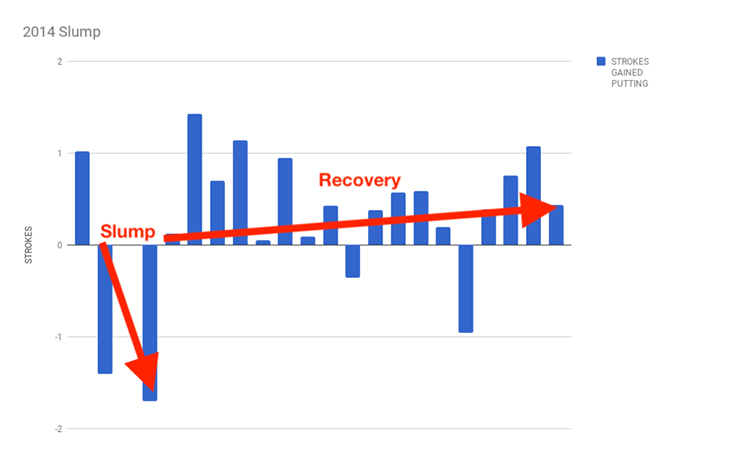 This was technically the most severe putting slump of Spieth’s career, but it was also quite brief: Two horrible putting displays over the course of three weeks early in the season (-1.40 SGP, 0 SGP, -1.70 SGP) that tanked his average. What’s more notable is how stagnant his recovery period was. It took a whopping 23 events after the slump for Spieth’s average to return to normal. It was a big story that year, too: That prolonged comeback meant he went the entire season winless, and he even toyed with a putter switch at one point. 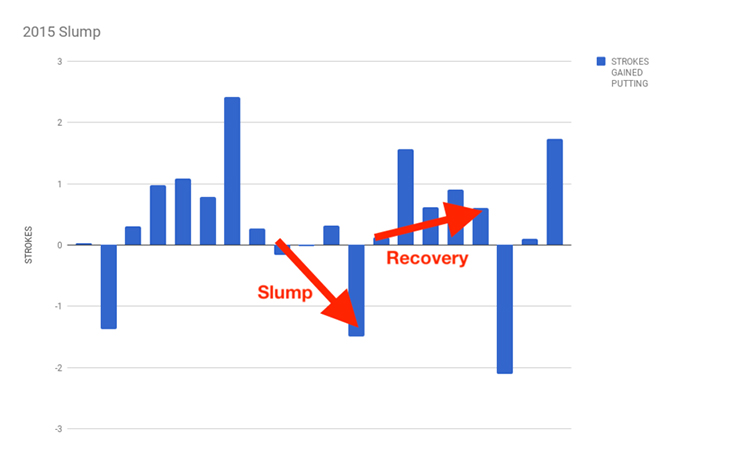 I’m breaking my own rule including this here because, over a four-event period, Spieth boasted one positive (0.311 SGP) showing. Regardless, it deserves inclusion. It was the best kind of slump: After a brief downturn, it took Spieth five events to return to average over that nine event stretch. 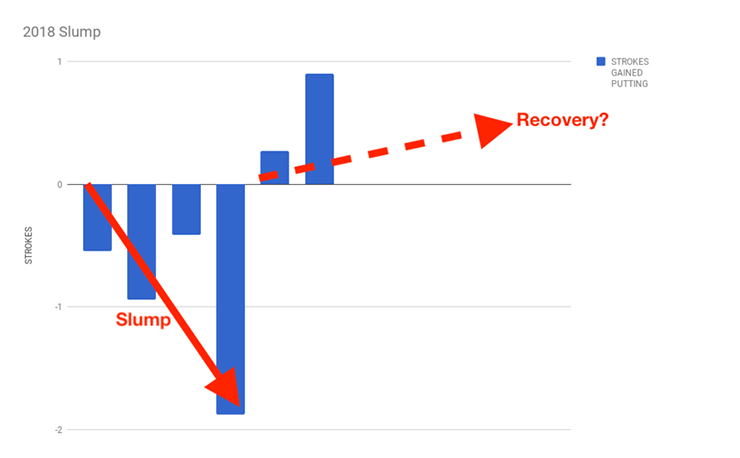 Which brings us to Spieth’s current putting slump, the worst of his career so far. It’s not just that it’s relatively long (four consecutive negative SGP showings in a row) it’s the severity of those performances (-0.945 average) that’s concerning. He seems to be through the worst of it, with 0.269 and 0.901 SGP in his last two starts, respectively, but he’s still got a long way to go.

Let’s say Spieth goes on a tear over the next few weeks; it’d take Spieth nine more events of him recreating the best sustained putting form of his career (a 0.758 SGP average from 2016) in order to get within his career SGP average. That’s almost half the season, and that’s without accounting for any more significant downturns.

Basically, expect Spieth to putt significantly better in the next few weeks, but unless becomes the runaway best putter on tour immediately after a slump, he’s almost certainly on track for a below-average putting season anyway. The worse the slump, generally speaking, the longer it takes to correct. Spieth has dug himself into quite the hole with his putter already this season, and it’s simply too deep for him to vault out of quickly.