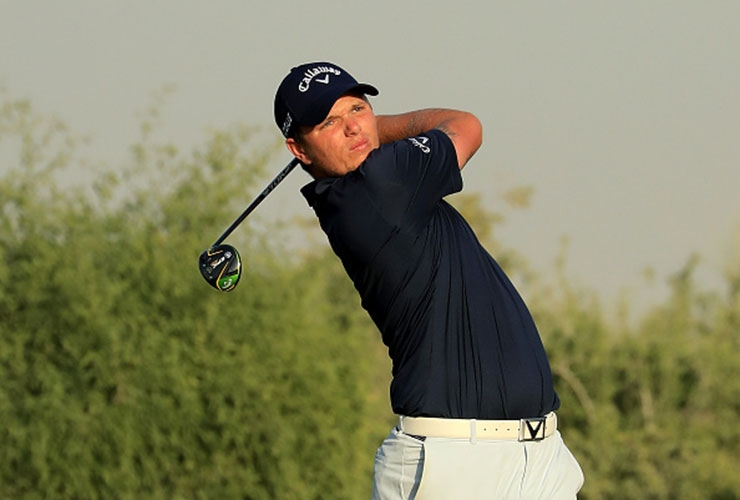 By Kent Gray
It seems Callum Shinkwin is slowly coming to grips with this desert golf lark.

The 25-year-old Englishman will tee it up in his third Omega Dubai Desert Classic on Thursday after winning medalist honours in the European Tour event’s new qualifying tournament at Dubai Hills Golf Club on Monday – a week after achieving the same feat in Abu Dhabi.

Shinkwin backed up a course record 64 at Dubai’s newest course on Sunday with a 68 on Monday to win the Omega Dubai Desert Classic Shootout with an impressive -12 total. The Heartfordshire pro edged French Challenge Tour regular Victor Rui (67-66) by a stroke while three-time European Tour winner Marc Warren (65-69) was third on -10 to claim the final spot in the Desert Classic’s 30th anniversary edition at Emirates Golf Club.

“To qualify for tournaments is great, and even better when you win them,” said Shinkwin who is making a decent early fist of regaining his European Tour card after finishing a lowly 119th in last year’s Race to Dubai – three spots shy of retaining his playing privileges.

Shinkwin is no stranger to Middle East golf but has taken time to learn the subtleties of desert golf.

The 2013 English Amateur champion has played the past two Desert Classics and missed the cut both times. He kicked on from winning the 54-hole Abu Dhabi HSBC Championship qualifier with a T-54 placing at Abu Dhabi Golf Club last week, finishing 15 shots behind winner Shane Lowry for an €18,845 payday. But he still only has a 50 percent cuts made success rate in four starts in Abu Dhabi.

England’s @CallumShinkwin wins a second straight qualifying tournament in the Middle East to book his place at the @OMEGAGolfDubai Desert Classic alongside @MarcWarrenGolf and Victor Rui.

Shinkwin hopes his recent run of scoring – he signed for rounds of 71-68-73-73 in Abu Dhabi – will help him better his best score of 72 on the Majlis in last year’s second round to finally survive a weekend in Dubai.

“I have played the Omega Dubai Desert Classic a couple of times, but never did well there. I guess it was at the start of the season and I was not that prepared. But I have now played plenty of golf already and I am hoping to do much better this time around,” he said.

And this is what @CallumShinkwin had to say after winning the medalist honour at the @OMEGAGolfDubai Desert Classic Shootout at @DubaiHillsGolf today. pic.twitter.com/PZxByhepvq

Warren finished 130th in last year’s Race to Dubai, missing the cut on both Abu Dhabi and Dubai. But the 37-year-old Scot has smooth swing and a proven pedigree to take into what will be his 13th consecutive Desert Classic after taking a long gamble to qualify.

Want to know why @MarcWarrenGolf took the long, 5,800km flight from Glasgow to Dubai?

He had this to say after successfully completing his mission at the @OMEGAGolfDubai Desert Classic Shootout. pic.twitter.com/1OmCLPm1oR

Josh Hill was the best of the teen amateurs at Dubai Hills with rounds of 76-72 for a four over total and a share of 45th place, two shots better than Trump Dubai club-mate Toby Bishop (75-75).

DeChambeau on influencing the next gen like Tiger: “This is actually not a joke. This is legitimate science.”