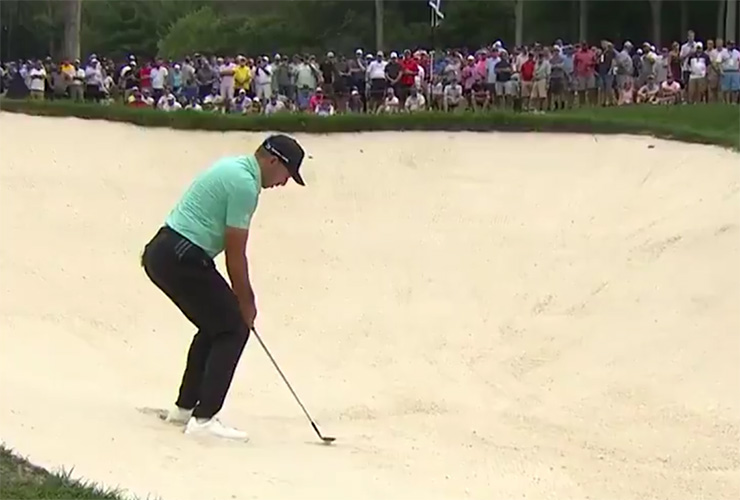 By Ryan Herrington
Stay inside the top 30 of the FedEx Cup points list and book your trip to East Lake. Realistically, that had to be what Sergio Garcia was thinking when he started the final round of the BMW Championship. Having begun the week in 44th place in the points list, the 41-year-old Spaniard played impressively over the first three days at Caves Valley, shooting rounds of 65-67-67. That let him creep into a tie for fourth place, four off the lead, and jump to 27th in the projected points race. For a guy who hasn’t played in the Tour Championship since 2017, getting to Atlanta would be a pretty nice accomplishment.

The goal, however, likely changed after completing the first four holes on Sunday, when Garcia went birdie-eagle-par-birdie to suddenly sit just a stroke off the lead. Forget top 30 … how about win the damn tournament! Especially with the drivable par-4 fifth hole next up, providing another realistic birdie opportunity.

While Garcia’s drive ended up in the front greenside bunker on the 306-yard hole, an up-and-down birdie was still possible. Until this happened …

He ends up with a double bogey at the 5th after struggles in the bunker. pic.twitter.com/F2vVgOGXM7

Yep, that wasn’t a replay of one bunker shot, but rather two straight bunker shots that Garcia unfortunately left in the sand.

Finally, on the green in four, Garcia’s two-putt for a double-bogey 6 was made more frustrating by the fact that no player had double bogeyed the hole all week. Yikes!

When Garcia was four under on the round, he had risen to 17th in the FedEx Cup projected standings, but the double dropped him back to 27th. Needless to say, the rest of Sunday’s final round got a lot tenser than Garcia probably was hoping for.