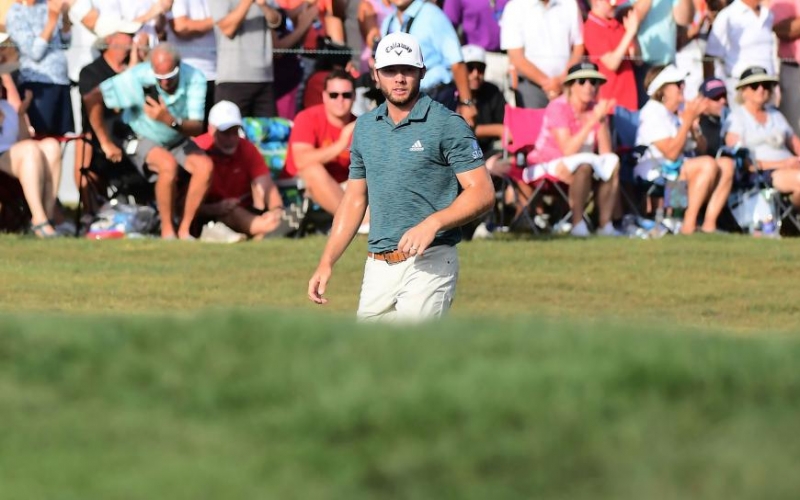 After a few close calls, the former college standout gets his breakthrough PGA Tour win—and seems ready for more

By Daniel Rapaport
Sam Burns and Keegan Bradley had traded blows for 30 consecutive holes, seemingly glued to one another at the tip-top of the Valspar Championship leader board. They shared the 36-hole lead, shot matching 69s in the final pairing on Saturday and had both taken 46 shots through 12 holes on Sunday, three clear of third as they headed to the 13th tee on a feisty Copperhead Course at Innisbrook.

The par 3 measures 182 yards on the card but played far less—a 9-iron for the bombers, an 8-iron for the mortals. Burns played first and his 9 came up well short, on the dance floor but a solid 60 feet from the band. So Bradley pulled 8, ostensibly to fire away from the water and toward the middle of the green, content to let the decisive blow in this two-man battle come a bit later.

What followed was his worst shot of the week, a fanned cut that found the drink—the type of break Burns had been waiting for in an annoyingly long quest for PGA Tour win No. 1.

Bradley’s blunder resulted in a crushing double bogey, the turning point in a shootout that became a rather comfortable stroll to victory. Burns’ three-under 68 was good for a three-shot victory, the first of the 24-year-old’s career. The first, according to CBS’ Jim Nantz, of “many to come.”

“I don’t think I could have dreamed of a better moment,” Burns said after his family joined him on the 18th green to celebrate. “Just to have my wife [Caroline] there. We have been together for … not married but together for five or six years. She’s seen really good golf, she’s seen really bad golf and she’s just been there by my side for all of it. So to have her here was really special. And just a moment that we’ll get to have for the rest of our lives, we’ll get to tell our kids about one day.”

Coming into this final round, Burns wasn’t quite in why-hasn’t-he-won-yet territory. But he wasn’t far away, either, thanks to his consistently excellent play—Saturday evening marked the eighth time that Burns had led or co-led after a round in the 2020-21 season, two more than any other golfer. Before this week, the most recent time came at the Genesis Invitational, where he played preposterously good golf to lead a star-studded field by five at the halfway point. He started the final round that week at Riviera with a two-shot lead, shot two-under 69 on a major-ready golf course, and lost.

There was also the 54-hole lead at the Vivint Houston Open last November, where he finished T-7, and the brutal 75 he shot from the final group at the Farmers Insurance Open in January.

Burns doesn’t say much, a laconic Louisianan who says more with his eyes than his mouth. The few words he does offer suggest a steadfast belief in the Law of Averages—that if he continued to put himself in position, one of these days it’s going to happen.

“You have a better understanding of what it takes,” Burns said of the near-misses. “And I think having those past chances that I wasn’t able to convert, I think it got me ready for this moment. Going into the back nine [caddie], Travis [Perkins] and I just really wanted to stick to our game plan, stick to the process of just being really engaged on each shot. And we were able to do that.” 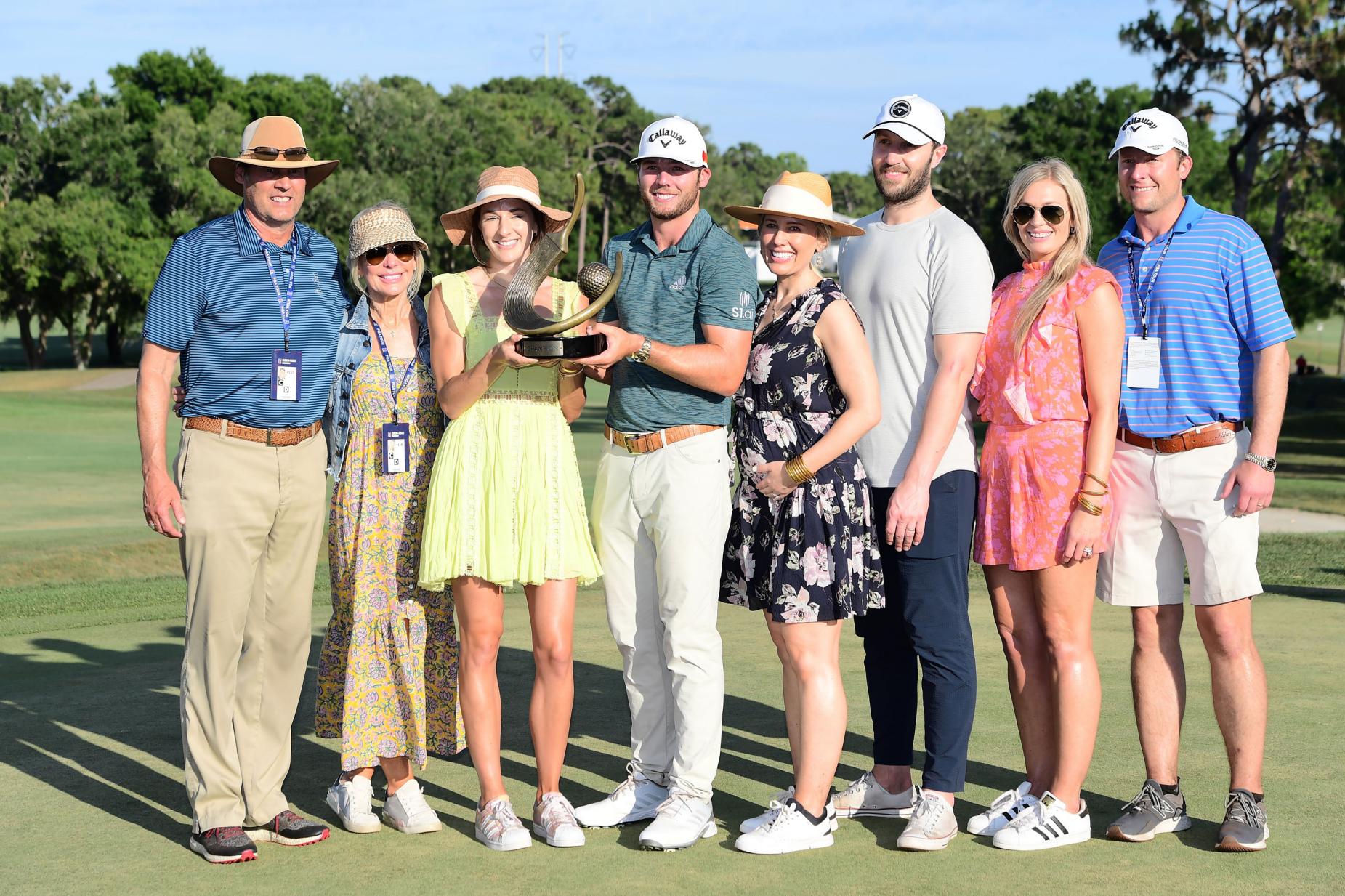 Julio Aguilar
Sam Burns celebrates with the trophy and family members (including his wife, Caroline, to his right) after winning the Valspar Championship for his first PGA Tour title.

He’ll be delighted, then, with his process on the par-5 14th, right after Bradley handed him control of the tournament. A 312-yard drive left him 251 yards to the hole, well within his wheelhouse, but a lone pine tree stood inconveniently in his line. Perkins stepped in with an assertive message: The tree is in your way, and you’re laying up. Burns never hesitated in pulling 7-iron. From there, he feathered a lob wedge within two feet of the hole, the birdie bringing him to 15 under for the week on the par 5s.

Bradley, who was trying to win for the first time since September 2018 at the BMW Championship, battled a cold putter and missed from inside seven feet on 16 and 17, rendering the final hole all but academic. The 34-year-old dropped nearly three shots to the field on the greens over the weekend, a frustratingly familiar story for a player who entered the week ranked No. 182 in strokes gained/putting. But it’s the swing at 13 that will leave a particularly rank aftertaste.

“I just hit a terrible shot,” Bradley said. “I hadn’t really hit a really bad shot all week, and you just can’t hit it there, obviously. But you can’t hit it right of the flag. And I just came out of it a little bit, it got gobbled up by the wind, if it goes another yard, it might have been in that bunker, but it was a bummer.”

And so the tour now has yet another sub-25-year-old stud with a win under his belt. Burns did not have the same instant success on tour as some of his other age-peers, posting just four top-10 finishes in his first 45 events. But there is no one timeline for a golfer’s development, and Burns didn’t quite emerge until this season. Now that he has, there’s reason for optimism that he can absolutely reach that elite level; the win will take him inside the top 50 in the World Ranking (one of 10 golfers 25 and younger in that group), and you get the sense he won’t be leaving anytime soon.

The signs have been there for quite a while. After winning the Nicklaus Player of the Year Award as a sophomore, Burns skipped his final two years at LSU to turn professional. Before making the jump, he was passed over for the 2017 U.S. Walker Cup team, an inexplicable snub that irks him to this day. Four months later, playing on a sponsor’s exemption at the Honda Classic, he earned himself a Sunday tee-time with Tiger Woods … and beat him by two. 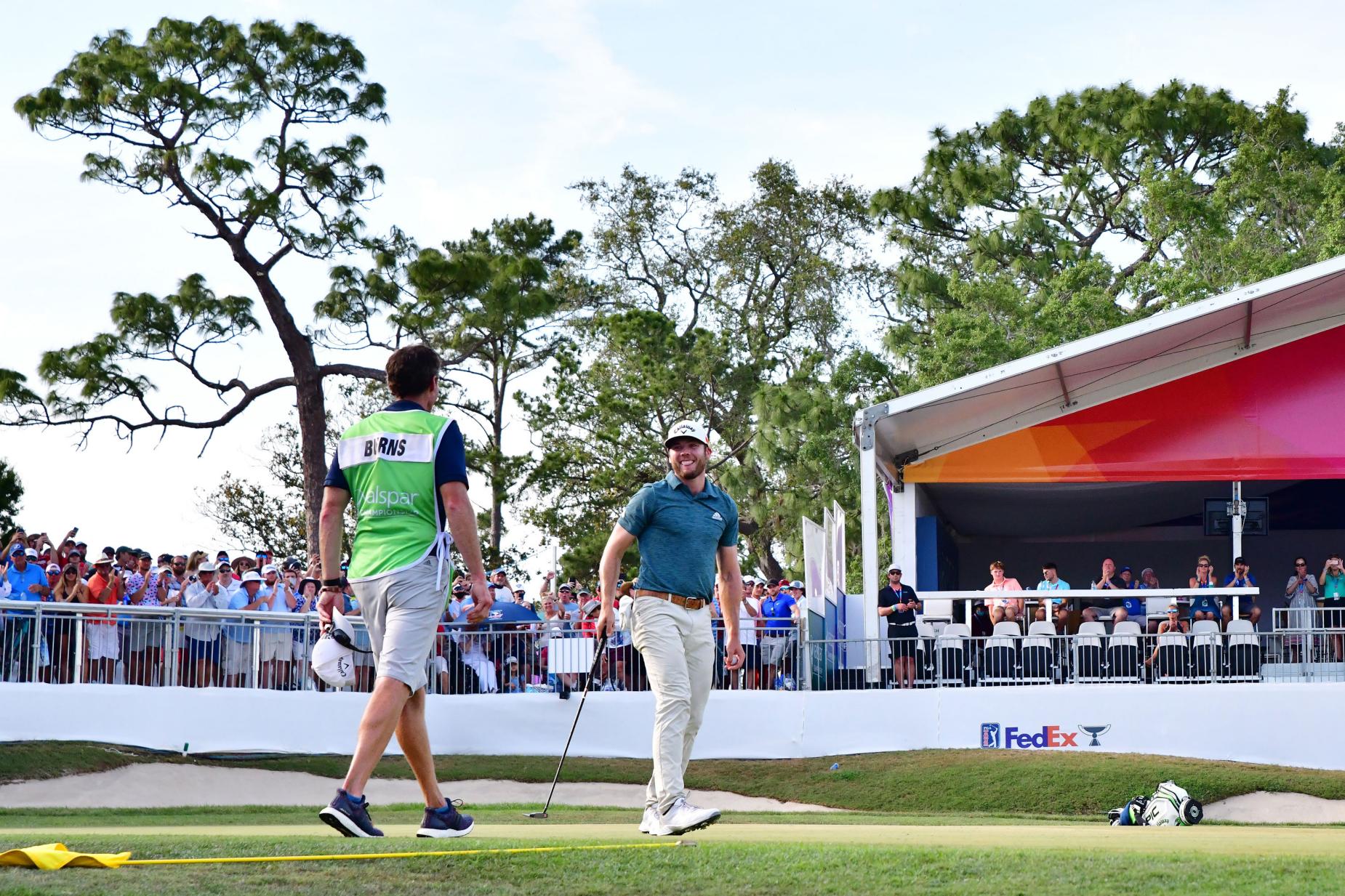 Julio Aguilar
Burns celebrates with his caddie Travis Perkins on the 18th green after closing out the three-shot win.

Burns left an impression on Woods that day, the legend particularly intrigued with Burns’ ball-striking and his veteran-like demeanour at 21. “He played beautifully,” Woods said back then. (Two months later, Burns won on the Web.com Tour, ensuring that his time spent outside the big tour bubble would not last long.)

Still, there are plenty of impressive players who never win on the PGA Tour. Take Cameron Tringale, who finished tied for third. The 33-year-old has played in 299 PGA Tour events and amassed more than $13.7 million in career earnings—more than any player in Tour history without a victory.

Sam Burns learned first-hand just how difficult winning is—at Memorial Park, at Torrey and at Riviera. At Innisbrook, he learned that difficult does not mean impossible.

Back in the pre-TV megadeal/pre-Tiger days, only the very best PGA Tour players—the guys who won consistently—could accrue generational wealth. But that was then, and this is now...