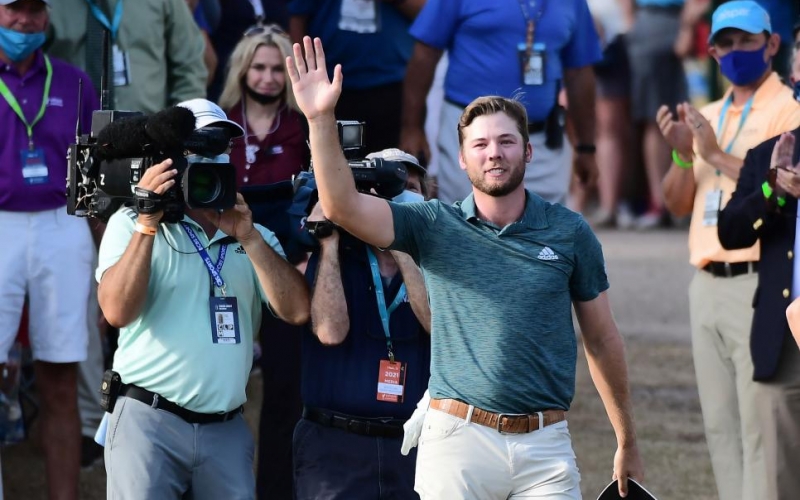 By Brian Wacker
For so long Tiger Woods made winning look so easy on the PGA Tour that we started to forget how difficult it is, whether it’s a guy trying to do so for the first time in his career or a major champion trying to find his way back after winning just once in the last eight-plus years and taking a World Ranking tumble.

Five players began the final round of the Valspar Championship within four strokes of the shared lead of Sam Burns and Keegan Bradley. By the time the proceedings reached the 12th hole at Innisbrook Resort’s Copperhead Course on Sunday, though, it was down to just those two.

And when Bradley rinsed his tee shot on the par-3 13th, it was Burns’ tournament to lose.

In February, Burns led by three going into the back nine in the final round of the Genesis Invitational and missed out on a playoff by a stroke. This time, it wasn’t that close. He shot a three-under 68 to win by three over Bradley, the 24-year-old getting that elusive first victory on tour.

Here are our takeaways from the final round of the Valspar Championship.

The 182-yard par-3 13th played as the second most difficult hole Sunday on the Copperhead Course. Still, there had been only one ball hit in the water all day—until Bradley inexplicably took a (too) aggressive line, right of a right, tucked pin (with Burns already dry but a long way from the hole). When Bradley mis-hit his 8-iron, he could only watch helplessly as his ball smacked off the railroad ties fronting the greenside bunker and into the drink.

All day, Bradley’s misses had been to the right, but this was the worst possible time to miss right. Then after a wedge from the drop zone, he missed a 20-footer to save bogey.

Burns, meanwhile, had a long birdie try from 60 feet that needed to go through the fringe to have a chance of getting anywhere near the hole. He never hit it high enough, and the putt came up eight feet short. Then, bang. He made the par try and the lead was his by two.

Things only got worse from there for Bradley, the 2011 PGA champion who has just one victory since 2012 (2018 BMW Championship).

On the 14th, Burns’ caddie, Travis Perkins, talked the former college player of the year at LSU into laying up on the par 5. He did, then delivered a dart from a delicate 78 yards to set up a tap-in birdie. Bradley also laid up, but he missed a 15-footer for birdie and fell three behind.

Finally, on the 16th, the third-toughest hole of the day, Burns provided one more dagger when he drained a 15-footer for another birdie. A four-shot lead with two holes to play made a Burns’ bogey on the 18th for a closing 68 inconsequential.

“I just hit a terrible shot,” Bradley said of his miscue on 13. “I hadn’t really hit a really bad shot all week, and you just can’t hit it there, obviously. But you can’t hit it right of the flag. And I just came out of it a little bit, it got gobbled up by the wind. If it goes another yard it might have been in that bunker, but it was a bummer.” 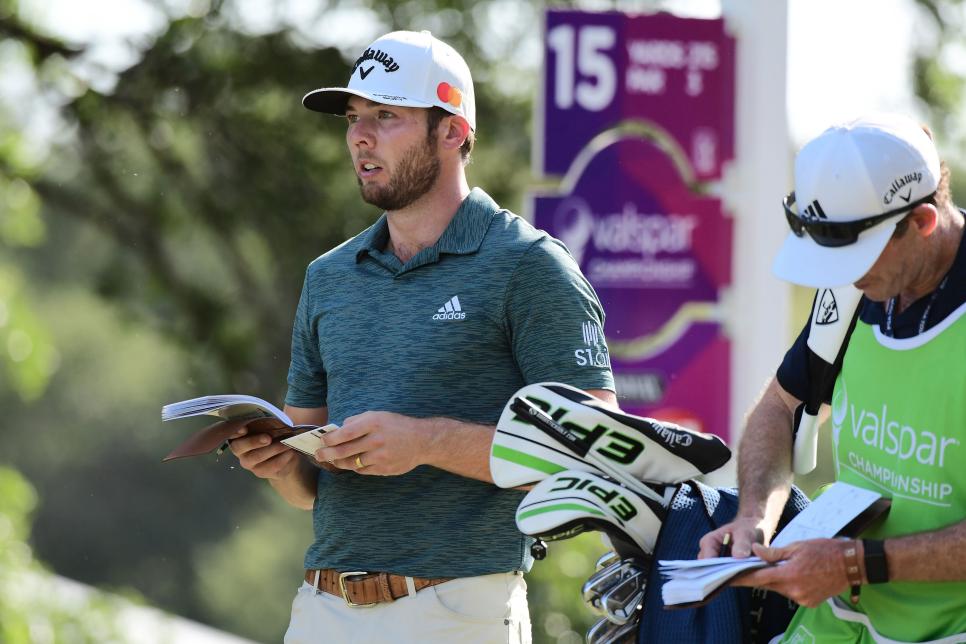 Sometimes you can spot a victory coming. That argument certainly could be made for Burns.

A week ago, he made eight birdies to teammate Billy Horschel’s one in the opening round of the Zurich Classic and throughout the week helped keep the duo in contention before they finished in a tie for fourth. At the Genesis in February, Burns rattled off four birdies in his first nine holes on Sunday to sprint to a three-shot lead, only to give it all back with three bogeys in four holes in the middle of the back nine before missing out on a playoff by a stroke. He’s also had at least a share of the lead after eight rounds this season, most of any player on tour.

Asked on Saturday about his failure at Riviera, Burns shot back that he didn’t look at it as a failure, rather a learning experience. “I think for me it’s just taking a little more time in those moments and really talk through the shot and really have a clear plan of what I’m trying to do,” he said.

He certainly did on Sunday, be it backing off and waiting for a gust of wind to blow through before sticking a pin-high approach to set up a birdie on No. 7 or deciding to lay up on 14. As good as his shots were, so was his thought process. 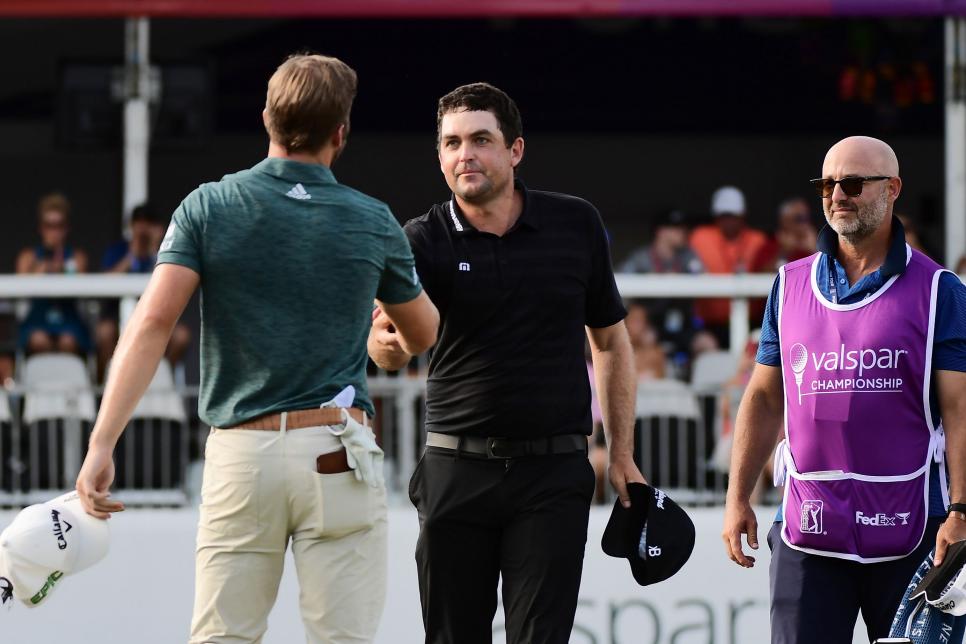 There’s no sugarcoating Bradley’s mistake on 13. It really was a terrible shot. Still, a runner-up finish is at least something positive the 34-year-old can take from the week.

It was his best finish since a tie for second at the 2019 Travelers Championship. More importantly, his iron play, at least prior to the final round, was particularly impressive. And his putting, long a weak point of his game, was solid early in the week and even early on in the final round.

“I was in contention today obviously coming down the last nine holes, I’ve done pretty well in my career when I’ve had a chance, and I just didn’t hit the shots that I needed to coming down the end.” 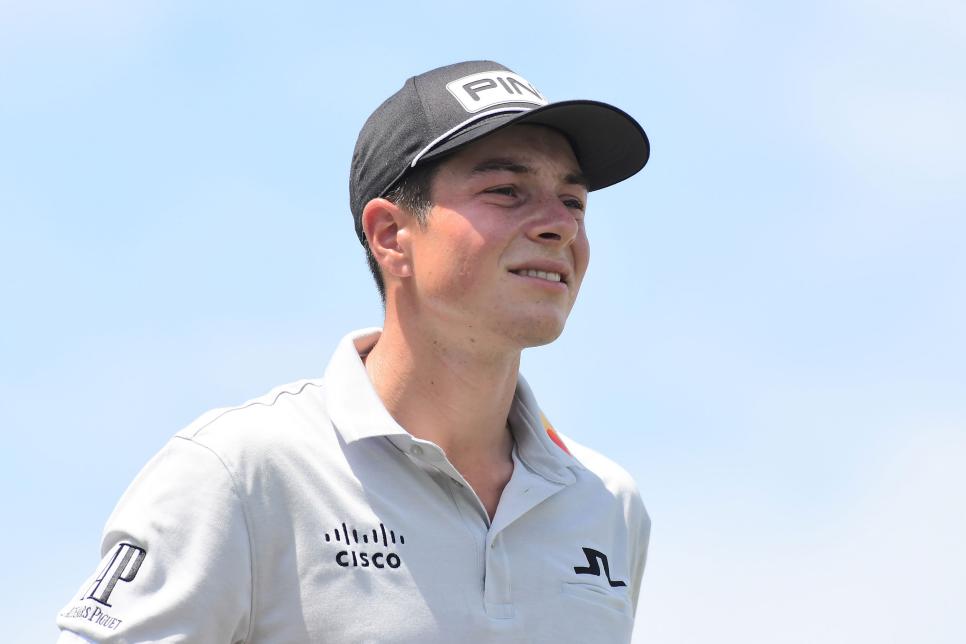 The bad news for Viktor Hovland is that he’ll have to wait to move into the top 10 in the World Ranking. The good news is that he’ll still climb to a career-best No. 11 thanks to a final-round 65 and tie for third at the Valspar.

Seven back at the start of the day, Hovland’s chances of catching the leaders were always slim. Perhaps that’s what freed him up, though, as he rattled off four birdies in his first five holes then added another at the ninth. Two more followed, on 14 and 16.

It was too little, too late in terms of winning but still good enough for the best round of the day (65).

And it was a nice bounce back from a week ago, when the Norwegian and partner Kris Ventura imploded with a final-round 78 in alternate shot to tumble out of contention and finish in a tie for 25th in New Orleans. Perhaps it will also spark another good run of play from the 23-year-old, who was on a heater earlier this year with three-straight top finishes in January and February.

“Obviously the win [last fall] at Mayakoba was a lot of fun, but I think—I shouldn’t say I prided myself more, but it’s nice to see that validation with the other tournaments as well, the couple of runners-up and other top-fives and just kind of making sure that I’m playing good golf week-in, week-out, because that’s, I feel like that’s a lot more fun,” he said. “Obviously getting another win would be very fun, but just being consistent week-in, week-out is, yeah, I take a lot of satisfaction from that.”

Max Homa produced one of the more memorable wins of the PGA Tour season in February...