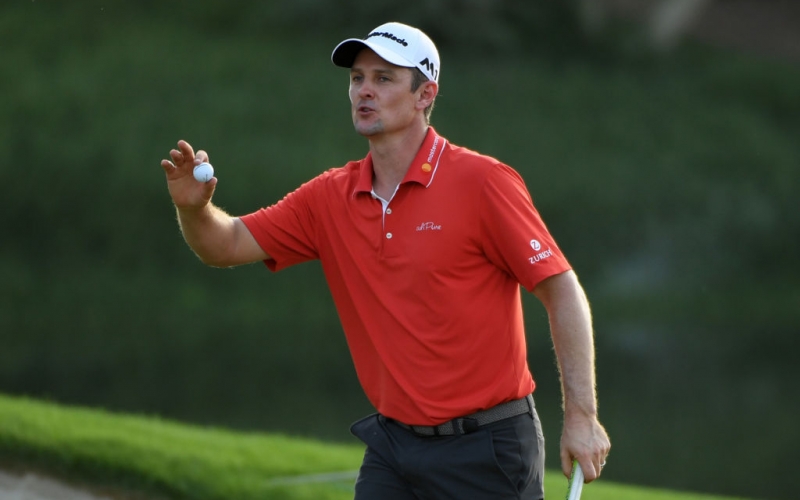 By Kent Gray
There would be genuine and heartfelt sympathy for Tommy Fleetwood but few could begrudge the Race to Dubai title falling Justin Rose’s way on Sunday.

The 37-year-old went to bed on Saturday with a one shot DP World Tour Championship lead and as a consequence, a 616,619 point buffer over Tommy Fleetwood in the projected Race to Dubai standings.

An abacus is still likely needed in the final wash-up on Sunday afternoon, unless of course Rose can complete a remarkable hat-trick of titles after his WGC-HSBC Champions ambush of world No.1 Dustin Johnson and his Turkish Airlines Open delight.

Given his sublime golf on Earth, it’s certainly not out of the question even if Fleetwood refuses to give up on the points lead (and the career-long kudos) he’s held for so much of this European Tour season.


Rose’s third round 65 – to go with earlier loops of 66-70 – had it all again on Saturday: precision off the tee, laser like control with his irons and artistry around the green highlighted by a chip-in for birdie on the par 3 12th that couldn’t have been any more centre cup or deftly weighted.

Even his putting, a shade off colour on Friday, was pure after a check-up with flat-struck guru Phil Kenyon after the second round. Think the 40+ foot bomb on 16 for his fourth birdie in five holes and the nerve-jangling, right-to-left, downhill three-footer to save par on 18 after he’d again bungled the par 5 with a heeled five wood into the creek.

Earth is there for the taking and Rose, at -15, knows it as he attempts to repeat as European No.1 10 years after also winning the final event of the season at Valderamma. As well as Fleetwood, there’s the immense figure of Jon Rahm, just a shot back, to consider, not to mention his final round playing partner Dylan Frittelli who is also at -14 and flying after a 63 on Saturday. Indeed, 15 players are within five shots of Rose’s lead on a bunched leaderboard, serial winners such as Kiradech Aphibarnrat (-13), Tyrrell Hatton (-12), Patrick Reed (-11), defending champion Matthew Fitzpatrick (-10) and Sergio Garcia (-10) who all have the firepower to go very low and put a spanner in the points race works.

“I’m certainly not thinking about being the leader because I think it is such a condensed pack and someone tomorrow is going to have to play great golf to win. Someone is going to shoot in the mid 60s at some point who is within touch.

“It’s going to be a day where you’re out there not paying too much attention to the leaderboard early in the round. You just have to put your blinkers on and play good golf.”

Rose had no idea Fleetwood had started so slow – one over through five – or finished so fast with eight birdies in his final 11 holes to shot a second successive 65. But he wasn’t surprised to find afterwards that his good mate was still very much in the mix; Fleetwood must equal or better Rose to be European No.1.

“Did he? I had no idea how he shot 65 or whatever he shot. Yeah, that’s unbelievable. Good for him. Saw him get to 11 and then all of a sudden he’s at 13 and he was obviously making a nice charge.

“Keeping it interesting. But like I said all week, I know what I need to do to stay at the top of the leaderboard. But if I slip up tomorrow, he’s right there. He’s done everything he needs to do on his end, so it’s a lot of fun.

“So yeah, an opportunity, that’s the way I’m going to look at it. Don’t see much pressure on myself tomorrow. This is going to be a day just to go for it really and play well.”

Strap yourself in. This shapes up as the most epic final round shootout on Earth yet.