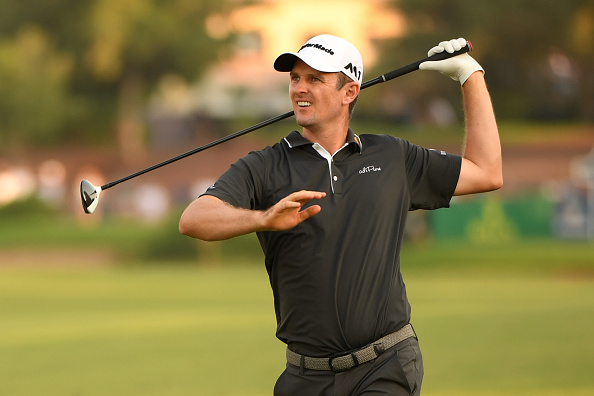 By Kent Gray
In his pre-tournament press conference, Justin Rose was asked how frustrated he’d be if he came up just short in his Race to Dubai duel with Tommy Fleetwood.

“Yeah, it would be disappointing, of course, because it would come down to one shot, and there will be one shot this week that I’ll look back on and go, oh, could of, should of, would of, done better there.”

The 37-year-old Englishman went to bed on Friday hoping his late three-putt blip on 18 at Earth on Friday wasn’t that costly – as in a career-long kudos and immediate $1.33 million bonus payout costly – moment.

Rose stood on the 18th tee needing a birdie to join Matthew Fitzpatrick atop the DP World Tour Championship. He left the green, via a pushed three wood, a undercooked pitch from the lush drop-zone and a three-putt – with bogey in a two-under 70 that left him in a three-way tie of third, two shots adrift of Fitzpatrick.

Crucially, Fleetwood returned to the top of the projected Race to Dubai (order-of-merit) standings with a 65 that dulled the frustration of his opening 73. He’s four adrift of Fitzpatrick but only two shy of Rose who was asked if he was satisfied walking off 18?

Related: Fleetwood – “It’s all about how you react to stuff, isn’t it?”

“I would have been, apart from 18. I hit such a good tee shot down 18. To make six just ends the day on the wrong, note but other than that, I played really well on the back nine. Got myself back in it.

Projected #RaceToDubai with two rounds left in the season.

“I was aware of the scores and who had done what today. It was an exciting day’s golf from a Race to Dubai point of view. But listen, halfway stage, I’d probably have signed up for that if somebody said on Wednesday, you would be in this position after two rounds, I’d have taken it. It’s a position you can build on the weekend.”


So you were aware Fleetwood had righted his ship?

“Yeah, I was aware of Tyrrell, as well. Knew there was a good score to be out there but from Tommy’s point of view it’s a great bounce-back after yesterday. Like I tried to say all week, doesn’t really make much difference to me in my mind-set.

“Might make a difference on Sunday because I know there’s tons of permutations still. But in terms of my task, it doesn’t make too much difference.”

The frustration for Rose was that he drove the ball beautifully but struggled to read the greens. He’ll certainly replay 18 over and over.

“Yeah, the 3-wood right was an unforced error, but then to compound it with a 3-putt was annoying,” Rose said.

“It’s a really confusing visual coming up 18. It’s hard to see the whole putting surface and there’s so much going on in the backdrop that when I had my last look towards the target, your brain takes in a lot of information. Probably wasn’t clear on my target and my shot and bailed out there.

“The third shot was kind of a playable one. If you played it perfect, I was a yard short of probably being six feet. So I nearly played a great third shot but maybe tried to force the putt.”

One shot. In fact you could take your pick of four; the bailed out approach, the pitch, the forced birdie try, and the wayward par attempt. It’s hard not to think of the potential Race to Dubai ramifications, doesn’t it?

“Yeah, it creeps in for sure. I think you want to keep it out of your thoughts when you’re hitting good shots. That’s a recipe for good golf. Of course between rounds and at nights, it creeps in,” Rose admitted.

Thankfully he has 36 holes to put things right.

“It is the old cliché. I think come out tomorrow positive. You don’t want to leave yourself too much to do on Sunday from too far back.

“Just come out tomorrow and have a good, positive mind-set and try to make a few birdies. Might spend an extra 20 minutes on the putting green in the morning. Felt the ball position was creeping too fall forward maybe. Because I felt like I was sort of guiding it towards the hole.”