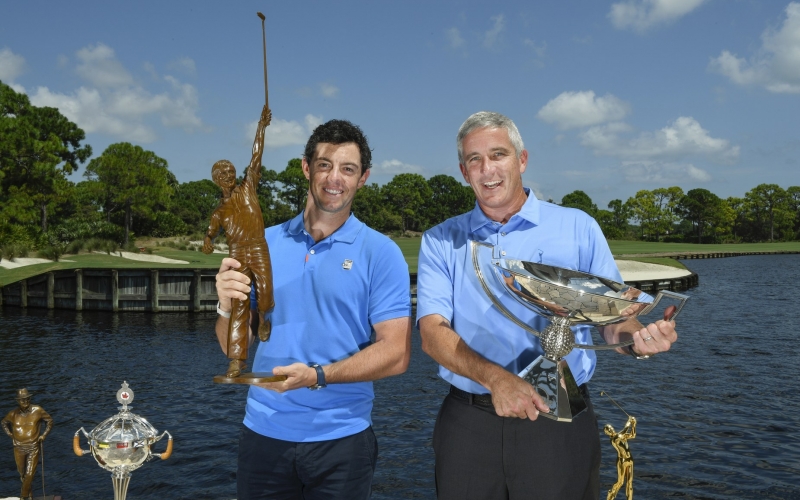 By Joel Beall
To the shock of many, including himself, Rory McIlroy was named the PGA Tour’s Player of the Year. Not as surprising is the debate that has subsequently ensued.

This was supposed to be Brooks Koepka’s honour. He already grabbed the PGA of America’s Player of the Year award, and it had been 28 years since the winner of one wasn’t the winner of both. Even McIlroy acknowledged Koepka’s eventual crowning after beating him at Tour Championship last month. “He’s had a great season,” McIlroy said at East Lake. “He’s won another major, he’s won three times. And I know it’s going to sting because he most likely will win the Player of the Year, but he didn’t win the FedEx Cup.”

Yet on Wednesday afternoon it was McIlroy, not Koepka, who PGA Tour commissioner Jay Monahan announced as the winner, to a largely baffled golf world.

This is not a swipe at McIlroy’s résumé or merits. That is a separate discussion. The puzzlement here is directed elsewhere: Who voted for Rory over Brooks?

As a refresher, the PGA of America’s honour is determined based on a points system. The PGA Tour, though, relies on player voting, with members who played in at least 15 FedEx Cup events during the 2018-’19 season casting the ballots. That process is handled internally; the tour does not publicly release the results.

Or, apparently, privately release them either. Given the election’s concealment, the Associated Press’ Doug Ferguson asked McIlroy during Wednesday’s media conference call if he knew how close the race had finished. “I inquired,” McIlroy said, “and they are keeping tight-lipped on that.” The call, just seven questions deep, was ended.

In itself, the vote could be chalked up as an anomaly. There were several pundits who argued on McIlroy’s behalf after East Lake, including some here, even if most noted that their arguments had flaws. Plus, there is a reason sports are so compelling; the outcome is never guaranteed. Still, the vote, and its clandestine nature, hints at something more problematic.

For all the PGA Tour does well, transparency isn’t one of them.

Though fans and media are often victims of the moment, this sentiment isn’t necessarily a case of recency bias. Monahan’s predecessor, Tim Finchem, once stated, “We don’t think the fans really want to know about most of the stuff we would be talking about,” and that ethos, at times, continues to ring true. From player fines to PEDs and drug enforcement to equipment and slow play policing, the tour continues to play things close to the vest.

All this explains, in part, why some on social channels questioned the vote after Wednesday’s announcement. Conspiracy theorists say a win for McIlroy was a win for the tour schedule’s relevancy versus the importance of major championships, events in which the tour has no official jurisdiction. Such speculation may be ridiculous, but it’s an environment the tour hasn’t helped temper.

As for the Player of the Year award, the tour brass has its reasons for not revealing the overall tally. It could be to mask feeble participation or protect players who received low vote totals from embarrassment. Although noble causes, they are the same excuses the Baseball Writers’ Association of America—the group that elects the sport’s Hall of Fame—trotted out to protect its voting privacy, believing public votes would hurt its relationships with franchises and front offices.

That is until 2016, when, after decades of fan and player outcry, the BBWAA acquiesced and released its votes to the public. Granted, the Hall of Fame reversed that decision, yet more and more voters since the referendum have made their ballots available to all, using their write-ins to spur the movement, as content and discussion pieces, and most importantly, to shield themselves from calls of malfeasance.

Considering the perceived open-and-shut complexion of this year’s vote, it is a framework the tour and its constituents should consider going forward. After all, in his state-of-the-tour address at East Lake, Monahan insisted the tour is “Not stuck in our ways.”

“It’s about our organisation putting a system in place that allows us to improve and ultimately helps excite those people that are going to watch and mimic the great players in the world,” Monahan said. “But not everything is going to be perfect and you’ve got to identify the areas you can improve.”

Here’s one they can start with.

Presidents Cup 2019: Why the U.S. team is already off to a rocky start