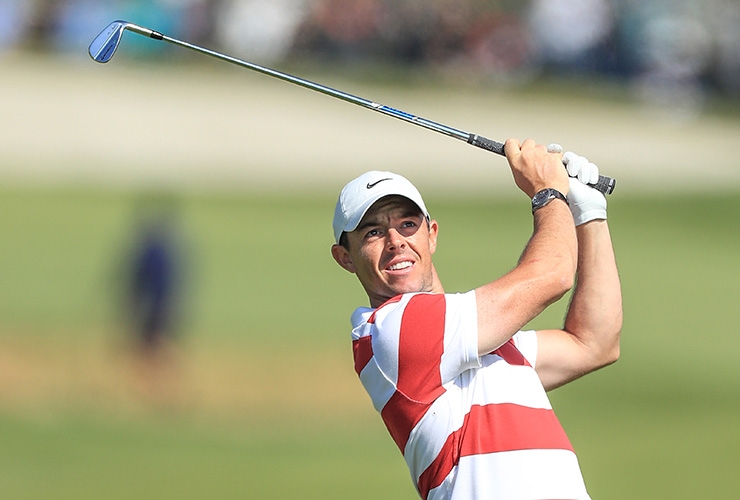 Rory McIlroy plays his second shot on the par-4, 3rd hole during the second round of the Genesis Invitational at The Riviera Country Club on February 14, 2020, in Pacific Palisades, California. (Photo by David Cannon/Getty Images)

By Christopher Powers
It’s hard to back up a low round anywhere on the PGA Tour, but some places are easier than others. Riviera Country Club is not one of those places, making what Matt Kuchar did on Friday all the more impressive.

Kuchar, 41, opened with a bogey-free, seven-under 64 on Thursday at the Genesis Invitational, one of a handful of bogey-free rounds on the day. Within minutes on Friday he already had his first blemish of the week, bogeying the easiest hole on the course, the par-5 first. He rebounded by playing the final 17 holes in three under, making only one bogey the rest of the way. Through 36 holes he sits at nine-under 133.

Two back is Rory McIlroy, one of the tournament favourites. McIlroy backed up his first-round 68 with a four-under 67, which featured six birdies and two bogeys. The Northern Irishman regained the No. 1 ranking in the world this past week, a position he had not held since the 2015 U.S. Open.

McIlroy is tied for second with Harold Varner III, who is still in search of his first PGA Tour victory. Adam Scott, who shot a seven-under 64 on Friday, is tied for fifth at six-under. Jon Rahm, Justin Rose, Dustin Johnson and Bryson DeChambeau are at four under.

Brooks Koepka, Tiger Woods and Jordan Spieth made the cut at even par, but have work to do to catch the leaders.