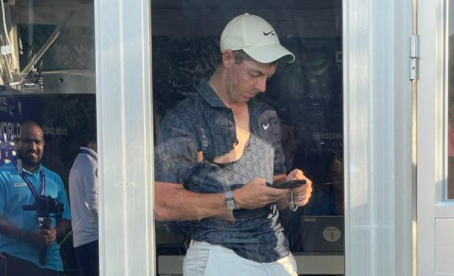 By Ryan Herrington
Bad breaks are part of golf. But when the bad break comes in the final round of the final official event of the calendar year—and with a $3 million winner’s cheque on the line—well it’s going to sting just a little bit more. And it might just lead to taking out some frustration on your own shirt.

So it is for Rory McIlroy. The Northern Irishman started Sunday at the European Tour’s DP World Tour Championship with a one-shot lead and was tied at the top with a hard-charging Collin Morikawa at 15 under as he played the 15th hole on the Earth Course at Jumeirah Golf Estates in Dubai. McIlroy, trying to win the tournament for a record third time, hit an impressive drive on the 371-yard par 4, leaving himself a flip wedge to the green to try to set up a birdie.

The announcers warned that the front left bunker was the one place you wanted to avoid given the hole location (“you put a red X there in your yardage book”), and McIlroy appeared to have done just that on his approach shot. With a crisp strike, his ball flew over the bunker right online with the flagstick. Unfortunately, too much online. See for yourself:

Some times you can be too accurate…

Sure enough, McIlroy was in the one spot he wanted to avoid. He proceeded to leave his third shot in the fringe shy of the green and couldn’t convert the par save with his putter. Meanwhile, Morikawa made a birdie on the 17th hole ahead and suddenly McIlroy was two shots back.

The bad break appeared to unsettle McIlroy, who made a three-putt bogey on the next hole and then bogeyed the par-5 18th after hitting his tee shot way right and his second shot into the water. Three bogeys on the final four holes left him with a two-over 74 score. 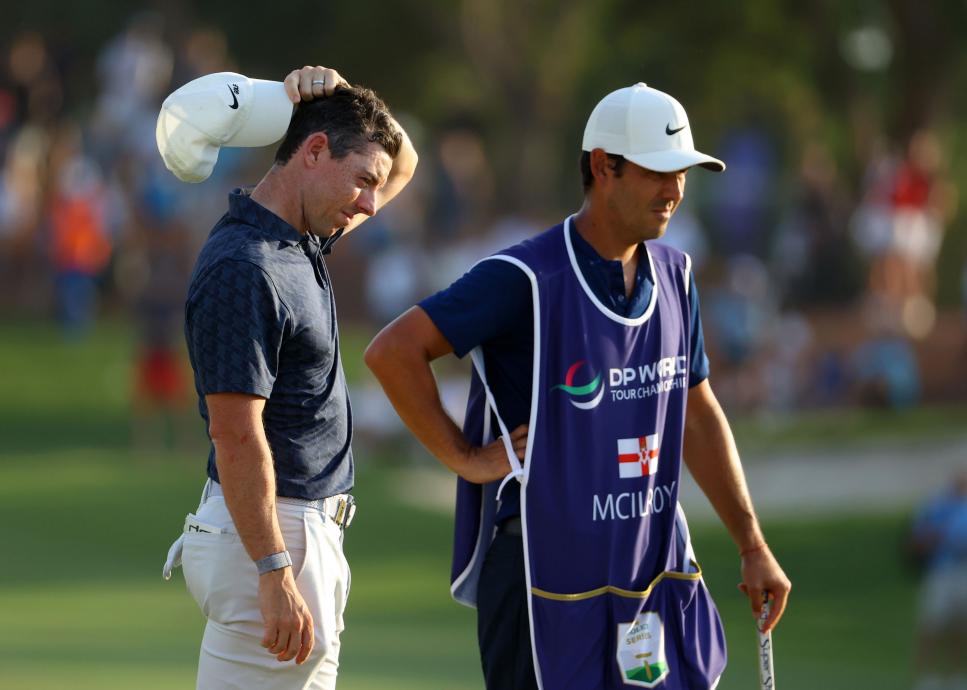 Andrew Redington
A dejected Rory McIlroy on the 18th green after making bogeys on three of his last four holes at the DP World Tour Championship.

Conversely, Morikawa made birdie on 18, his fifth on the back nine, to close with a six-under 66. That powered him past McIlroy by five shots and leave him three shots clear of eventual runners-up Matt Fitzpatrick and Alexander Bjork in pulling out the tournament win and securing his place as the first American to win the Race to Dubai title.

After the round, McIlroy did not talk to the press, but a photo of the golfer posted on Twitter in the scoring area shows him with a torn shirt that looks to have bore the brunt of some post-round frustration.