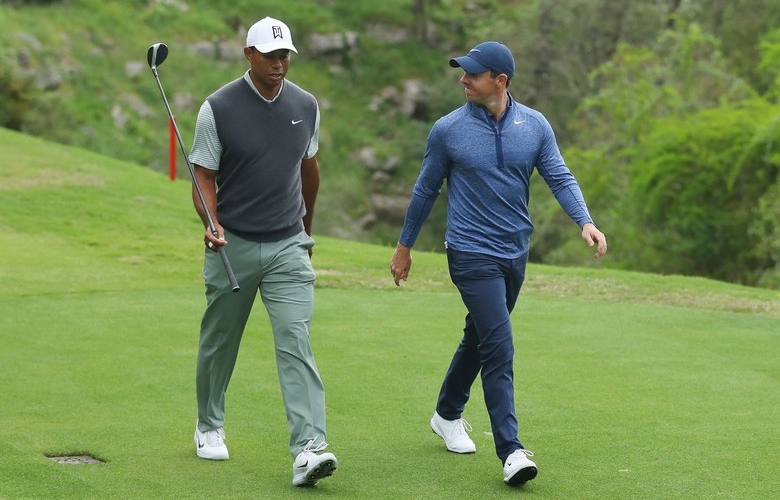 Warren Little
Tiger Woods and Rory McIlroy walk on the third hole during their match at the 2019 WGC-Dell Technologies Match Play.

By Brian Wacker
When it comes to statistical (or otherwise) achievements in golf, few people can boast to being better than Tiger Woods.

Rory McIlroy is now one of those few.

On Monday, the four-time major champion became the youngest player to spend 500 weeks inside the top 10 in the Official World Golf Ranking, according to our favourite OWGR guru @Nosferatu. McIlroy accomplished the feat at 30 years, 6 months, 8 days old, breaking a mark previously held by Woods, who needed four months more to reach the same milestone.

“The first [and maybe last] thing I’ve ever beaten Tiger at,” McIlroy said on his Instagram story, mind-blowing emoji included.

The first time McIlroy cracked the top 10 in the world was in 2009, after a third-place finish at European Tour’s Dubai World Championship.

Then, in 2012, he got to No. 1 in the world for the first time following a victory at the Honda Classic, where he held off a late charge from Woods for the victory. In doing so, he became the second-youngest player to reach No. 1—behind Woods.

RELATED: The reason behind Rory’s success in 2019 is why he’s so confident about 2020

Of course, McIlroy has been setting “youngest” records since before he even turned pro. At age 16, he was the youngest golfer to win the West of Ireland and Irish Amateur Close Championship in 2005.

Once he turned pro, he kept the trend going.

In 2007, shortly after turning professional, McIlroy finished third at the Alfred Dunhill Links Championship. The result moved him from 880th to 308th in the world. It also helped earned him enough money to become the youngest and quickest affiliate member to secure his European Tour card, in just two events.

Three years later, McIlroy became the youngest winner of the 2010 Quail Hollow Championship at 20 years, 11 months, 28 days (his closing 16-under 128 total was also the lowest final 36-hole total in tournament history). The following season, at 22 years, 1 month and 15 days, he became the youngest winner of the U.S. Open since Bobby Jones in 1923.

McIlroy’s stay in the top 10 doesn’t seem likely to end anytime soon, either. With four wins, two runner-up finishes, a third and 11 other top-10 finishes in 2019, he’s currently ranked No. 2 in the world.

The last time McIlroy was ranked outside the top 10? The spring of 2018, following a missed cut at the Valspar Championship, which dropped him to 13th in the world. He went on to win at Bay Hill in his next start.

Meanwhile, it’s likely that McIlroy will hang on to this record for a while, according to @Nosferatu. None of the known young stars of the game have been ranked inside the top 10 long enough to be able to break McIlroy’s new mark.

Stat of the week:

This week, 30.5 yo @McIlroyRory becomes the youngest player ever to spend 500 weeks inside the top 10 in the world ‼️

NONE of the known younger stars could possibly break this record‼️