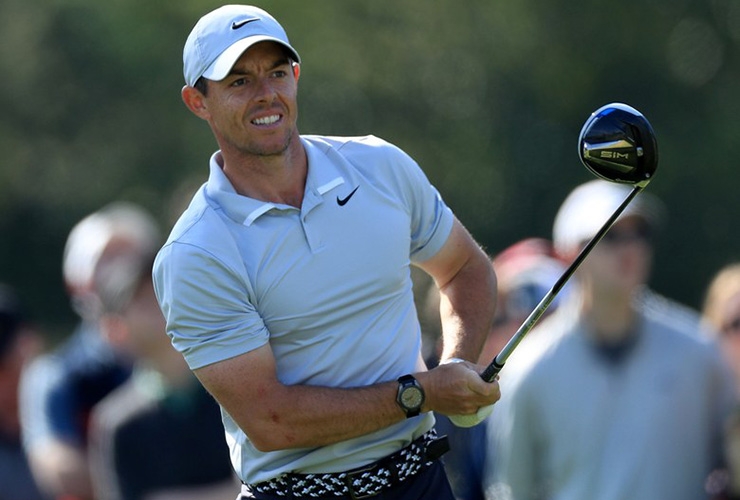 PACIFIC PALISADES, CALIFORNIA – FEBRUARY 15: Rory McIlroy of Northern Ireland plays his tee shot on the par 5, 17th hole during the third round of the Genesis Invitational at The Riviera Country Club on February 15, 2020 in Pacific Palisades, California. (Photo by David Cannon/Getty Images)

By Daniel Rapaport
A trio of world-class players are knotted atop a remarkably bunched leader board. A cluster of lesser-known challengers lurk behind, well within striking distance. The golf course is as good as you’ll find on the PGA Tour. As if all that wasn’t enough, Sunday’s forecast is perfect.

We’re near Hollywood, the global epicentre of clichés, so perhaps you’ll excuse this one: the stage is set for one helluva Sunday at Riviera.

Rory McIlroy, Matt Kuchar and Adam Scott share the lead at 10 under heading into the final round of the Genesis Invitational. Whatever the opposite of breathing room is, that’s what they have—there are 16 players within four shots of the lead, including Russell Henley and Harold Varner III one behind, and Joel Dahmen and past Genesis champion Dustin Johnson a shot further back at 8 under.

Kuchar will sleep on at least a part of the lead for the third straight night, having led by three after a Thursday 64 and by two after a gritty 69 on Friday. After a one-under 70 on Saturday, he’ll play for his 10th PGA Tour title but first in wire-to-wire fashion.

McIlroy, as he tends to do these days, has inexorably inched his way up the leader board with rounds of 68-67-68, putting the new World No. 1 in prime position for his fifth PGA Tour win in the last 11 months.

McIlroy has lathered Riv with praise all week, lauding its ability to make the best players in the world think their way around the course rather than simply overpower it. Earlier in the week, he said he’d love to see a major return to Riviera for the first time since the 1995 PGA—especially a Riviera with greens as firm as they’ve been on this rainless, relatively warm week in Southern California.

“The course is phenomenal. The whole place. I mean, staying in Santa Monica and doing all that, it’s a really nice week, but obviously topped off by the fact that we’re playing one of the best courses that we play all year.”

And then there’s Scott, the sweet-swinging Aussie who birdied 18 for a four-under 67 and a spot in the final group. He’s won this tournament before. Well, kind of. He finished atop the leader board in 2005 here when torrential rain shortened the event to 36 holes, too short to count as an official win. He did, however, still go home with the trophy. A win on Sunday would be the 39-year-old’s first on tour since March 2016, though he did win the Australian PGA Championship just two months ago.

“I think all of that is just a bit of motivation for me to win tomorrow here and have an official victory at Riviera, and the Genesis [Invitational]. I think that would be extremely satisfying for me.”

One notable omission from the Sunday drama will be tournament host Tiger Woods, who has played his last 45 holes in nine over after shooting a four-under 31 on his first nine of the tournament. He four-putted the 13th green on Thursday and needed 33 putts overall for a five-over 76, his worst round in relation to par since an opening-round 78 at last year’s Open Championship.

“I didn’t putt well today at all,” Woods said. “I didn’t have a feel for it, I didn’t see my lines, I couldn’t feel my pace and I was just off.”