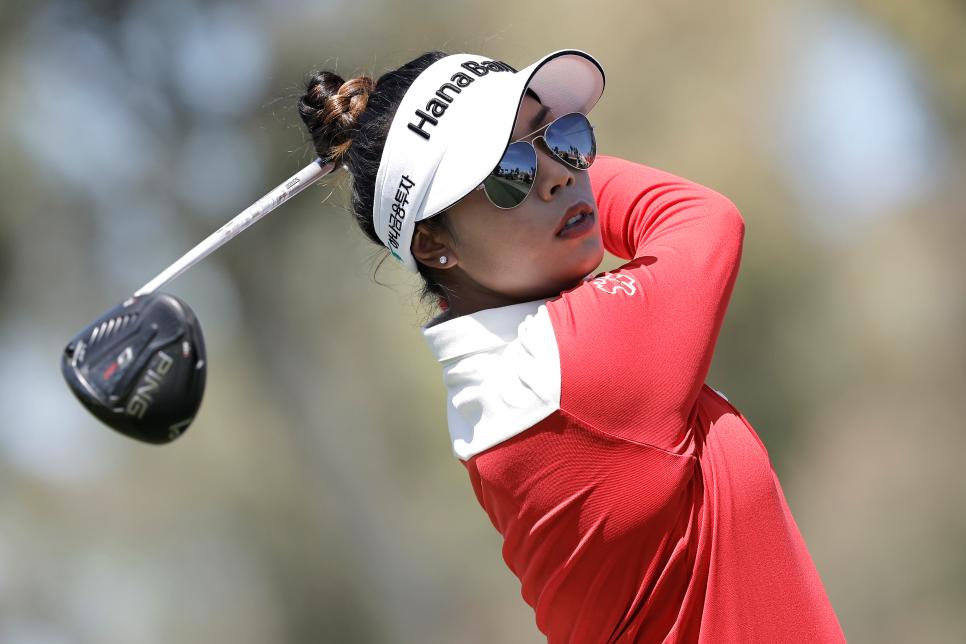 By John Strege
RANCHO MIRAGE, Calif. — When taking the measure of LPGA rookie Patty Tavatanakit, it would do well to start with a tape measure. She is a home-run hitter in a single hitter’s frame and her power helped distance herself from the rest of the ANA Inspiration field on Saturday.

Tavatanakit, 21 and 5-feet, 5-inches tall, opened her round with tee shots measuring 300, 337 and 360 yards, wind-aided, she said, but no matter. They set up birdies on the first three holes on the Dinah Shore Tournament Course en route to a five-under 67 and a five-stroke lead through 54 holes.

“It’s always nice to have a good start,” she said. “It helped to make me feel comfortable out there. I was really pleased with how everything played out.”

On Sunday, in this only her 18th start as a member of the LPGA, Tavatanakit will be pursuing a wire-to-wire victory, one that would make her just the second rookie to win this women’s major championship. The other? World Golf Hall of Fame Juli Inkster in 1984.

Five shots is a nice cushion, but whether it’s a comfortable one in the final round will depend on how she handles pressure dialed up to extreme, more so with a strong cast of pursuers that include defending champion Mirim Lee (tied for second with Ally Ewing) and Shanshan Feng, who trails by six. Inbee Park, a past champion here, trails by seven.

Among the legion of youth who drew inspiration from Tiger, Tavatanakit appreciates Woods’ ability to have closed out victories, that whatever he led by, he attempted to extend it.

“I’ve got it mind,” Tavatanakit said, hinting at her approach on Sunday.

“You know, today I’m going to leave it behind. It’s a great day, acknowledged it, and it’s in the past now. All I can think about is what can I do tomorrow, what can I improve from today’s round? I was getting a little tired at the end. What can I do to keep my energy level up throughout the day tomorrow? That’s going to be my goal. And just stay calm out there. I feel like I did that pretty well. So whatever the outcome is I’ll be really happy. It’s been a good week so far.”

Tavatanakit had seven birdies and only two bogeys, the latter coming on the back nine on another long, hot day, with the wind kicking up. She described it as “a good round in tough conditions. I just kept staying in the present, taking it shot by shot and hole by hole.”