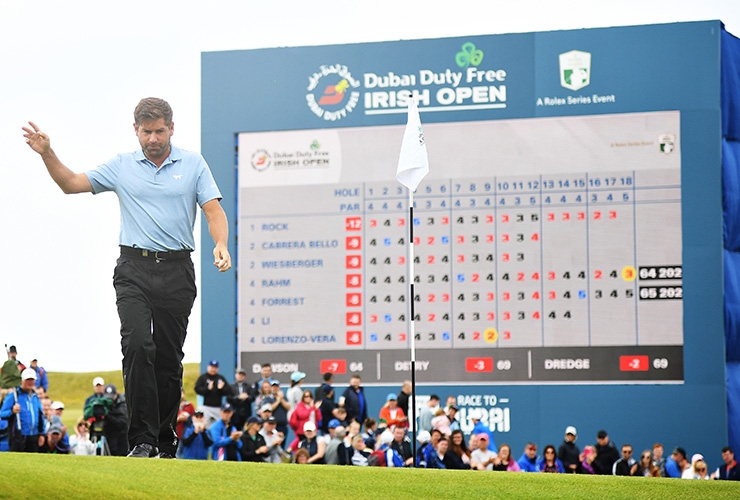 Jan Kruger/Getty Images
Rock reacts to his birdie putt on the 18th hole on Saturday at the Dubai Duty Free Irish Open at Lahinch Golf Club on July 06, 2019 in Lahinch, Ireland.

By Kent Gray
Robert Rock settled for a place in history and a decent shot at his first European Tour title since winning in Abu Dhabi seven years ago after going agonisingly close to shooting 59 to headline the penultimate day of the $7 million Dubai Duty Free Irish Open.

A stunning 10-under 60 on moving day at Lahinch Golf Club will see the 42-year-old Englishman take a one-stroke lead into Sunday’s final round over Eddie Pepperell and Dubai-domiciled Spaniard Rafa Cabrera Bello.

Rock will be aiming to collect the Irish Open’s winner’s cheque (all €1.16 million of it in 2019) for the second time but also wants the trophy; he won the money in 2009 but infamously lost the title in 2009 in a playoff to then amateur Shane Lowry.

The forgotten man of the 2009 #DDFIrishOpen will have another opportunity 10 years after playoff heartbreak. pic.twitter.com/dAGqjDddFK

Saturday was another glorious case of so close and yet so far for Rock who birdied his final six holes and had a 35-foot putt for eagle on the last but missed by inches on the low side to be denied just the second 59 in European Tour history.

You can check out the agony here:

Incredibly, Rock’s caddie Gary Tilston is the twin brother of Guy Tilston, who was on Oliver Fisher’s bag when the Englishman created history with the European Tours first 59 at last season’s Portugal Masters.

Check out the full highlights reel from the European Tour here:

“I played rubbish so far this year, so just delighted to play better. It is a good opportunity, it’s an opportunity to get my season back on track, to try to qualify for The Open and maybe have a chance to win a tournament again, which would be lovely because it’s been a long while.

“Any time you’ve got a chance to win a tournament like the Irish Open or Scottish Open, it really means something, it gives me a little extra focus. It’s hard to say it makes you play great because you can’t force that but it’s a great tournament and the people are amazing. I think the quality of the golf course is just fun to play.”

Rock is chasing his third European Tour title. He captured the 2011 Italian Open but is best remembered for holding off final-round playing partner Tiger Woods to win the 2012 Abu Dhabi HSBC Championship, eventually by a stroke from then-reigning U.S. Open champion Rory McIlroy.

A shot back after more than a month out with a back injury, Pepperell continues to surprise himself after rounds of 65-67-66 to be a shot back of Rock. Much Middle East interest on Sunday will be centred on the popular Cabrera Bello who roared into contention with a Saturday 63 to draw level with Pepperell on -12. Zander Lombard, the 36-hole leader, is a shot further back.

The last of Cabrera Bello’s three European Tour titles was also a links win at the 2017 Scottish Open at Dundonald Links.

Given the low scoring all week at Lahinch, even the players six strokes off the lead will fancy their chances on Sunday. Among them is unheralded Irishman Robin Dawson who had a special supporter following him during his third round 64. Check it out:

“There’s Rory, there’s Tiger, but my favourite player is my cousin.”

With 18 holes to go at the #DDFIrishOpen…