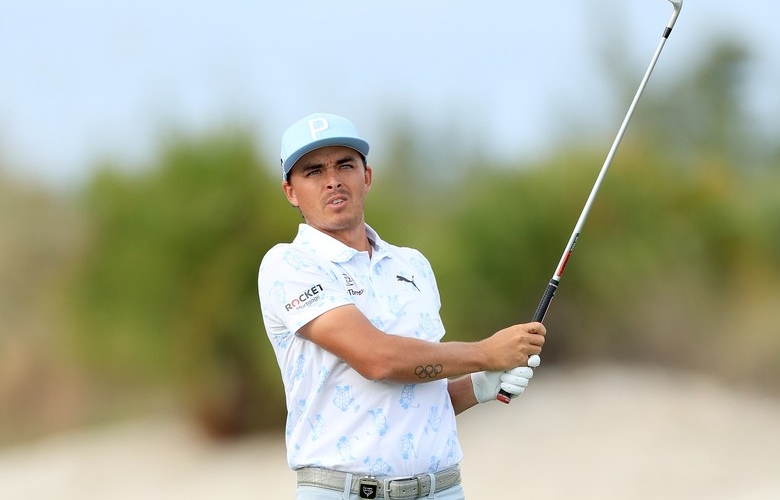 NASSAU, BAHAMAS – DECEMBER 05: Rickie Fowler plays his second shot on the 16th hole during the second round of the 2019 Hero World Challenge at Albany on December 05, 2019, in Nassau, Bahamas. (Photo by David Cannon/Getty Images)

By Brian Wacker
NEW PROVIDENCE, Bahamas — It’s been more than three months since Rickie Fowler played in a tournament. Not that you’d know it judging by his first two rounds of the Hero World Challenge, where he shot a second-straight 69 on Thursday to sit in a tie for fifth just six strokes back of leader Patrick Reed.

Bringing the clubs to your wedding helps.

“I really never went that long without touching a club,” said Fowler, who got married in October and whose last start was at the Tour Championship in August.

The 30-year-old five-time PGA Tour winner had planned to return to action at the Mayakoba Golf Classic in November. But he pulled out of the event before it started due to an intestinal bacterial infection that he got while on his honeymoon. That was about the only time he says he didn’t touch a club, a span that lasted about 2½ weeks.

Other than that, Fowler continued to practice and play, including in Cabo San Lucas, Mexico, where he tied the knot with Allison Stokke on Oct. 3. While he was there, he also teed it up in friendly games with Justin Thomas, Jordan Spieth and Jason Dufner.

Talk about an understanding bride.

Then, on Nov. 20, Tiger Woods announced that he had picked Fowler to replace an injured Brooks Koepka for next week’s Presidents Cup.

It was game on.

Fowler pegged it up at the pro-member at The Floridian in late November then proved a gracious Thanksgiving host by smoking a turkey for a large contingent of friends and family before jetting down to Albany.

Once here, he kept the good vibes going. During a windswept opening round, Fowler made just one bogey. Ditto a day later, in calmer conditions. Plus he has good memories from Albany; he won the Hero in 2017, sitting seven strokes off the lead after 54 holes only to win by four after shooting a closing 61.

Fowler has an eye on this week, yes, but also next and playing on another U.S. team.

“This is going to be a big preparation for next week now,” he said. “Prior to that, it was just about getting ready for this week. Having matches at home, having to finish holes and not just [mess around] is a huge help but nothing can compare to teeing it up in a tournament. I knew where my game was, but to go out and execute is a different thing.”

So far, it has worked well.