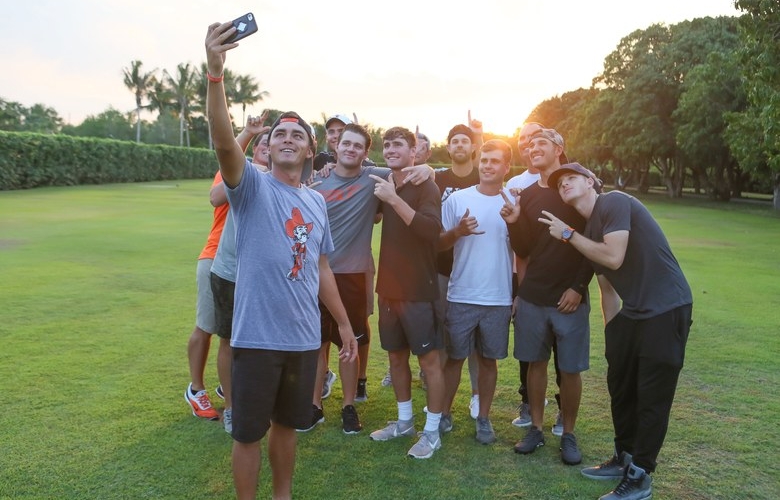 Beginning Monday night, those adult dreamers can fuel their fantasies with “Driven: Oklahoma State Cowboys,” a four-part series airing on the Golf Channel and NBC. The program—part documentary, part reality-TV show—chronicles what it’s like to be on the men’s team at one of the most historic college golf programs as it plays out the 2018 spring season in search of a national title.

That Oklahoma State would be the choice for this “Hard Knocks”-type series (sans the f-bombs and roster cuts) is only logical. The school hosts the men’s and women’s NCAA Championships at its home course, Karsten Creek Golf Club in Stillwater, later this month, and has arguably the largest following among any college golf program in the country.

Picking the Cowboys was also no coincidence when you see the name of the executive producer of the project: PGA Tour pro Rickie Fowler. Naturally, if he was going to be involved in chronicling the lives of college golfers, he’d be focused on his former program, having played for the Cowboys from 2007 to 2009.

“I think it’s going to be great for the golf fans and general public to get to see some guys playing in college golf that are going to be out playing on tour,” Fowler said. “Then guys that come out as rookies and start playing, they’re not necessarily going to be brand new to the scene. They would’ve seen them kind of coming through the college ranks.”

The idea for the series didn’t originate with Fowler—it was something Mike McCarley, president of golf, NBC Sports, says was floated when Golf Channel began covering the NCAA Championship in 2014. But the former Cowboy All-American was a catalyst in getting it to production.

When a Golf Channel team scouting Karsten Creek for camera locations in preparation for televising the NCAA Championship was in Stillwater last fall, they raised the idea of doing something more with former Oklahoma State men’s golf coach and current athletic director, Mike Holder. The initial talks went well, and Holder suggested partnering with Fowler, who in addition to his on-course pursuits was in the early stages of creating his own media company, Main Event Productions.

Fowler’s role has been as a consultant, working with writer and producer Ollie Stokes (a 20-time Emmy winner) to help identify story lines that piece together the lives of the guys on the team as they balance school and golf.

“I think showing tournament golf and showing the guys playing is kind of a small portion of it,” Fowler said, “trying to show a little bit more of the camaraderie between teams but also the friendships on the team, how close the teams are, how much time the guys spend together on campus, going ot class, working out, practicing.”

Fowler also gets some on-screen time, notably in the second episode, where he works with some of the players on the current roster and offers sage advice as the spring season gets truly underway.

The opening episode explores the history of OSU golf and its 10 NCAA titles and introduces head coach Alan Bratton and the guys on the 2017-’18 roster as they travel to Hawaii to play the first tournament of the spring.

Related: Rickie Fowler is ready to take a career leap

While focused on the program in Stillwater, a secondary story that develops in the first episode is the rivalry the Cowboys have with the University of Oklahoma. The Sooners are the reigning NCAA champions and provide Oklahoma State plenty of motivation to work hard on the course and in the weight room to try and dethrone their counterparts in Norman. The juxtaposition of the two schools promises to be a recurrent theme throughout the series.

Whether serendipity or smarts, the fact that the Cowboys wound up having a record-breaking spring season can’t help but boost interest in the show. Bratton’s team won seven straight team titles, tying the school’s all-time mark, and are ranked No. 1 entering the NCAA postseason. Three players in the starting lineup—freshman Matthew Wolff, sophomore Viktor Hovland and junior Zach Bauchou—have stroke averages of 70.76 or lower.

Even better—at least from a drama standpoint—is the fact that the Cowboys failed to win their last two tournament starts. OSU finished fourth at the Arizona State/Thunderbird Invitational and second at Big 12 Championship, falling to the Sooner—and making the choice of focusing on this classic rivalry all the more exciting.

The first three episodes air May 7 and May 14 (10 p.m.) and May 21 (8 p.m.) on Golf Channel, all ahead of the NCAA Men’s Championship, played at Karsten Creek May 25-30. The final episode will be shown on NBC on Saturday, June 16 at 5 p.m. (opposite the U.S. Open). Regardless of whether the Cowboys win the national title or not, the series will shine a welcome light on college golf.

Says Fowler: “I think it’s going to be a great recruiting tool for Oklahoma State, for OU, for other schools that get spotlighted in series like this down the road.”