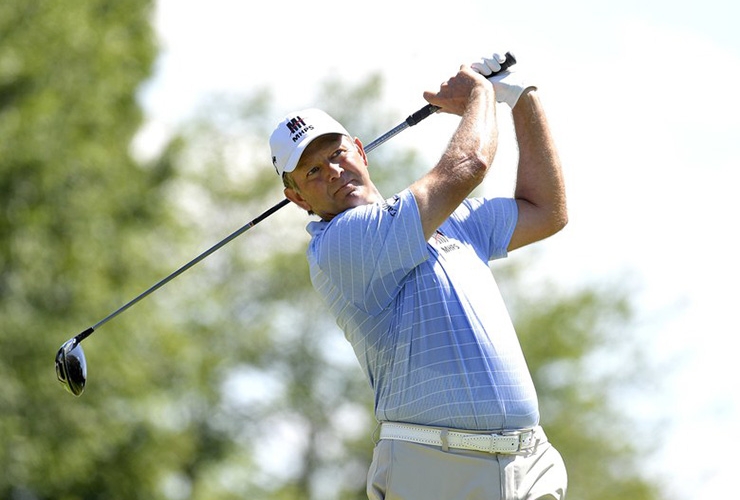 AKRON, OH – JULY 14: Retief Goosen plays his tee shot on the eighth hole during the final round of the PGA TOUR Champions Bridgestone SENIOR PLAYERS Championship at Firestone Country Club on July 14, 2019, in Akron, Ohio. (Photo by Stan Badz/PGA TOUR via Getty Images)

By John Strege
The inevitable prevailed over the unlikely in the Bridgestone Senior Players Championship on Sunday, when Retief Goosen finally won on the PGA Tour Champions and 65-year-old Jay Haas’ bid to win came up two strokes short.

Goosen, a World Golf Hall of Fame member with two U.S. Open victories on his resume, birdied the final two holes at Firestone Country Club in Akron, Ohio, the margin of victory over Haas and Tim Petrovic.

“It was an up-and-down year so far,” Goosen said, “and I had my chances a few weeks ago and didn’t do it. It’s nice to pull this one off.”

Goosen, 50, had been closing in on his maiden senior win, hence the inevitability. In his last four starts, he was fourth at the KitchenAid Senior PGA Championship, tied for 11th at the Principal Charity Classic, tied for second in the American Family Insurance Championship and tied for 14th in the U.S. Senior Open.

An unlikely winner would have been Haas, given his age and the fact that his last of 18 senior wins came three years ago. Yet Haas was one of five tied for the lead at four-under par midway through the round and was the leader in the clubhouse when he completed his round of three-under par 67.

Petrovic, who shot a two-under 68, joined Haas in the clubhouse at four-under par and waiting to see whether it would be good enough for a playoff opportunity.

It wasn’t. Goosen saved par from a back bunker at the par-5 16th hole, then birdied 17 with a 4-iron tee shot, a 7-iron second to 10 feet, and a perfect putt to take the lead at five-under par. At 18, he hit a perfect drive, an iron to eight feet and holed the putt to win by two.

“I knew it was going to play tough for everybody and I just had to hang in there,” he said. “I thought after the bogey at the first, here we go again, but I had a nice driver, 4-iron on the second and made a nice eagle there. It sort of settled me down and from there I was just trying to hang on.”

Scott Parel, the 54-hole leader, and Kent Jones were the others tied for the lead on the back nine. Parel double-bogeyed 17 and Jones bogeyed 15 and 18 and they tied for fourth.

Goosen receives $450,000 for the victory and a spot in the PGA Tour’s Players Championship next March.