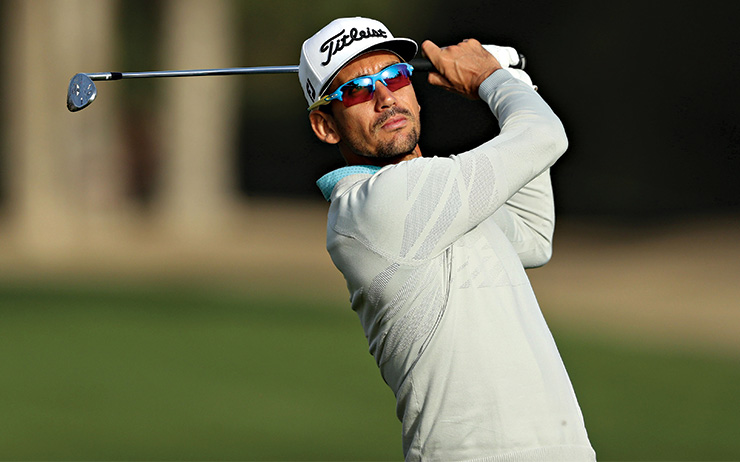 By John Tully-Jackson
After 16 holes of the opening round, Rafa Cabrera Bello was one-over-par and an afterthought in the Omega Dubai Desert Classic. Golf’s a crazy game though and back to back eagles to close out Thursday brought relief. Fast forward to Saturday and another eagle on the 18th has brought something much better – hope.

The Dubai-domiciled Spaniard sits at -14, after a brace of 69s were backed up by a superb bogey-free 64 in the third round, leaving him six adrift of Chinese wunderkind Haotong Li.

The 2012 Desert Classic champion may have shot the lights out on moving day but acknowledges there is still plenty to do to catch the front-runners.

“Eight under today was very good, and I missed a few close chances so I want to make them count,” said Cabrera Bello. “I need to go low tomorrow, do the same again to have a chance of lifting the trophy again.”

The three-time European tour winner has an affinity with the Majlis. He is eighth in the scoring average at the Desert Classic since 2007 with an impressive average score of 69.8 for 28 loops of the Middle East’s top-rated track.

“I love this tournament and the Majlis course, always play well here, lots of friends here in Dubai following me which is very nice.”

The reigning Scottish Open champion has already notched up a second place finish this season at the Hong Kong Open to follow up his six top-10s last season. But with the likes of France’s Alexander Levy, South Africa’s Haydn Porteous, and returning juggernaut Rory McIlroy currently between him and leader Li, Cabrera Bello has his work cut out.

One thing that should reassure the 33-year-old is his ability to finish a round. The final hole at The Majlis has been at his mercy this week, and if it should come down to finishing strong to seal a second Dallah, the evidence thus far presented only works in his favour.