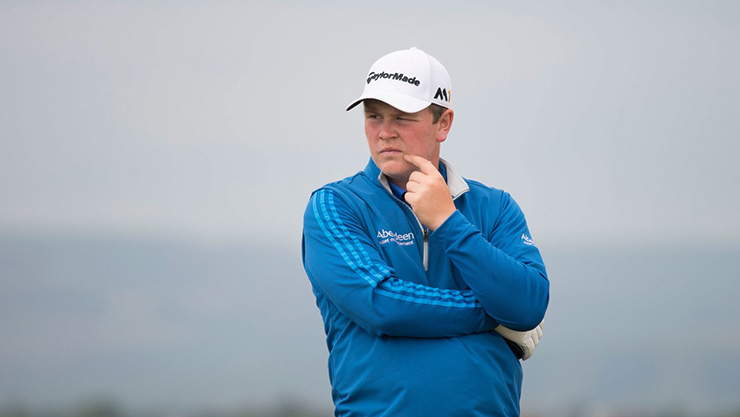 By John Huggan
ABU DHABI, United Arab Emirates — “Gallus,” like “bahooky” (backside), “wheesht” (be quiet) and “dreich” (cold, damp weather), is one of the great Scottish words. It suggests someone has a wee bit of “a way” about them. Not quite a cockiness. Certainly not an arrogance. But an air of self-assurance that augurs well for their future in life.

Bob Macintyre is gallus. Or at least gallus-lite. And why not? This 22-year-old Scot, a rookie on the European Tour this season, has already achieved much in his young life. Before turning professional, the Oban-native won the Scottish Boys stroke-play title, the Scottish Youths Championship and the Scottish Amateur, and was runner-up in the British Amateur.

All of which earned Macintyre a place on the 2017 Great Britain & Ireland Walker Cup side. That week at Los Angeles Country Club—a million miles away from the par-62 Glencruitten course from which he hails—didn’t go too well for the Old World team. But the “cawry-fisted” (left-handed) Scot was the exception to that overall stomping. In two singles matches against an American lad by the name of Cameron Champ (you may have heard of him), Macintyre emerged unbeaten. In the first, the pair shook hands on the 14th green, with the visitor the victor, 6 and 4. A day later the pair fought each other to a noble half.

“Watching Cameron do what he has done has given me belief that I can something similar on this side of the world,” says Macintyre, who has already recorded two top-15 finishes in four European Tour starts this season and currently sits 29th on the Race to Dubai. “I knew he was a great player before we got to the Walker Cup. So I knew beating him was a big scalp to have. People were writing me off before we played so that was a motivation for me. I’ll always remember our matches.

Like most everyone, Macintyre was impressed by Champ’s length off the tee. “His driving was amazing,” Macintryre said. “I’m not the shortest hitter. I get out-hit by guys on the European Tour, sometimes by 20 yards or so. But I’ve never been out-hit by 50 to 80 yards consistently, as I was against him. And I was playing well at the time. All he ever had to do was tidy up certain parts of his game to become a star. He’s well on his way to doing that.”

So is Macintyre, albeit at a slightly more sedate pace. But already he has gone far, farther than anyone from Oban ever has in the world of golf. And farther than any left-handed Scot has ever done. Already Macintyre is the greatest left-handed Scottish golfer of all-time, albeit that is an accolade for which there is little or no competition. Like Phil Mickelson, however, Macintyre is right-handed in everything else he does.

“You swing a shinty stick both ways, so it feels natural playing left-handed,” explains Macintyre. “My Dad always was left-handed at golf and right-handed writing. I thought that must be the way to do it.”

Although raised virtually on the course where his father is the greenkeeper (his family home sits between the 11th and 12th tees and close to the 15th and 16th greens), Macintyre almost didn’t become a golfer. His first love was the aforementioned shinty, a ferociously competitive Highland sport played with a stick that is a cross between a field hockey stick and an ice hockey stick.

“The head is slightly curved and maybe half the size of an ice-hockey stick,” says Macintyre, who played for his local club, Oban Camanachd, for four years before his “retirement.” “After that it is pretty much hockey with no rules. It can get rough.”

Indeed, one of Macintyre’s uncles lost an eye on the shinty pitch and it was a serious injury to a friend’s thumb that convinced the then 17-year old to focus more on his golf. It was a good move. A plus-five handicapper when he turned pro, Macintyre still plays off that mark when he competes in medals at his home club. But it is away from Glencruitten where he has really shone, a fact that has drawn the attention of four-time major champion Ernie Els.

Three times this unlikely duo has been paired together in events this season, with Macintyre distinguishing himself on each occasion. 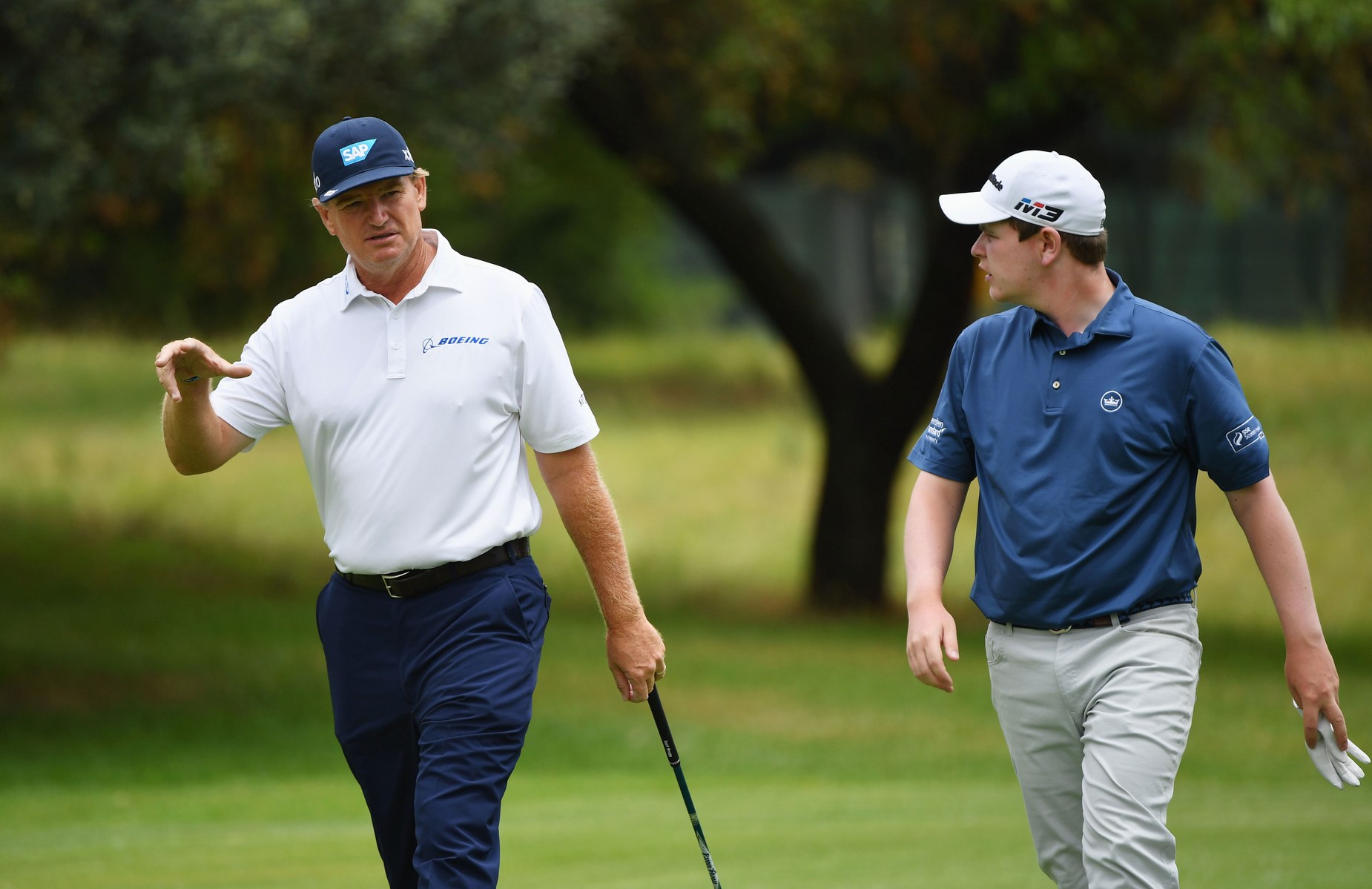 Els and Macintyre have been paired together in three Euro Tour events this season. (Stuart Franklin/Getty Images)

“Ernie was just so relaxed,” Macintyre says. “He was great to me. Nothing in his game stood out; he was good at everything. He didn’t need to spend time with me. But at Leopard Creek when we were drawn together for the third time he made a comment on the practice green: You again? Just a little thing, but he made me feel at ease and that I belonged out there. He told me wee stories going round and in there were little bits of advice.”

Some of that centered on Macintyre’s short game. Relative to his natural gifts when it comes to the hitting of full shots, the Scot’s work around the greens is an area in which he knows he must improve.

“Having played with Ernie, I can see that my chipping needs to get better,” Macintyre acknowledges. “I’m fine with the really difficult chip, but not so much with the easy ones. My strength has always been my long game and my ball-striking. I’ve always been good tee-to-green. When I’m playing well my driving is usually really good. But I’m working hard with my coach, Davie Burns, on my putting. It’s getting better but I have a bit to go.”

Still, for all that, Macintyre never has to look far for context in his life away from the tour. For the last few years, his family, led by mother Carol, has welcomed foster children into their home. Two boys, aged 5 and 11, are the current inhabitants, a fact the youngest Macintyre (he has two older sisters) clearly enjoys enormously.

“The boys have been with us for over two years now,” he says. “My Mum always wanted to foster but we do it as a family. We are all part of it. And it has been brilliant. At their ages you can change and influence them. And I know they love the environment at home. In the summer they are out in the garden. Water fights. Playing football. Out on the golf course. I wouldn’t change any of that. Having those kids at home puts my life and golf in perspective. It’s just a job.”

Macintyre’s fondness for the place he calls home comes with a price, however. Comfortable enough amongst a dozen-strong group of Scots on the Challenge Tour from which he graduated in 12th place last year, he has so far struggled a little to adapt to the European Tour itself, where he has played five times already in the 2018-’19 season with a pair of top-15 finishes.

“Out here I’m on my own a bit more,” he says, in the first of what will be nine consecutive weeks on the road. “It’s not easy. It can get a bit lonely. One thing you have to be on this tour is good in your own company. So I spend a bit of time on the phone to the family. My first goal this year is to keep my card. But I’ll aim higher if I get the chance. If I do that and miss, I’ll still be OK. I like to think I could make it to the Race to Dubai final at the end of the season. We’ll see though.”

Indeed we will. And the way things are going, who would bet against this enormously likeable young man? Certainly not Cameron Champ.