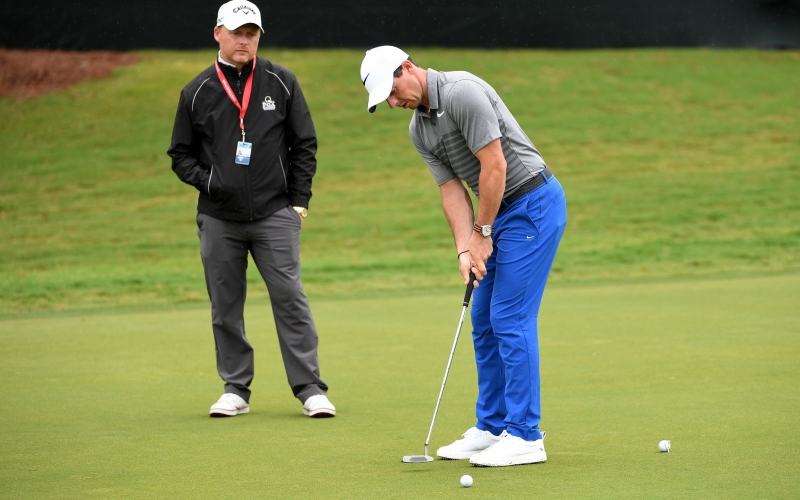 “Phil has really been great for me,” confirms Stenson. “He has played a big part in improving my putting. I’m not sure of the exact numbers, but many times over the last couple of years I have produced a better finish in tournaments because of my work on the greens rather than my ball-striking. Before Phil came along that was hardly ever the case.

“He is so knowledgeable and I have really benefited from his advice. And I know I’m not alone in saying that. Look at all the high-profile players he helps. One of those is Justin. I think he gave Phil a call right after I won the Open last year. Not long after, Justin beat me to the gold medal in the Rio Olympics. I will have to have a chat with Phil about that (laughs).”

So let’s do just that with the quietly spoken graduate of the John Moores University in Liverpool, where Kenyon studied psychology and sports science.

“Coaching putting brings with it different challenges,” he says. “It’s not the same as coaching the full swing. There is a different skill set. There’s more touch and feel and some intangibles in putting. The full swing is more technical and is about generating power and distance. That involves biomechanics and physics. With putting, there is less emphasis on achieving things mechanically.

“There are prerequisites to good putting though. You have to be able to control the club face. That determines the start line. If you have a pull or push bias and don’t have a tight degree of tolerance in your starting line, putting gets a bit difficult. Control of speed is a must, especially on the fast greens we see on tour. Then there is green-reading. All of those factors have to work together if you are to putt well. If you are great in two and poor in one you won’t be too successful.”

Okay, how does a putting lesson begin? What are the first things Kenyon looked for when the likes of McIlroy, Oosthuizen and Rose asked for help? And how does he prevent what is surely one of the biggest drawbacks in putting — overthinking the stroke or the break or both?

“The biggest question I always ask myself when watching a new pupil: can he or she consistently start the ball on the desired line?” says Kenyon. “That isn’t to say they have to aim perfectly. Aiming is very often a function of the stroke. So if you have a tendency to push putts it is likely that your alignment will be to the left of the ultimate target. They compensate for each other. And there a lot of guys on tour doing just that.

“A big key with all players is giving them the right amount of information – and at the right times. Sometimes they want the information but I know the timing is wrong. They want it but they don’t need it. That is especially true of players who are very technically minded and often need to be freer in their approach to putting. Those guys tend to be sound technically but under-appreciative of the other skills. So I spend time getting them comfortable without too much tinkering.

“Then there are guys who read greens well, or have a real feel for distance and pace. But that great touch and feel doesn’t always translate into starting the ball on line. So those guys need more technical advice. Everyone is different in terms of that mix.”

As history has shown us, there are many different ways to putt effectively. The legendary South African Bobby Locke — reputed to be one of the best-ever putters — “hooked” everything, standing closed to the target line. Even at his best Arnold Palmer employed a stroke that would be labeled “wristy” today. Similarly, Billy Casper rested his hand on his thigh and “popped” his putts. Jack Nicklaus hunched over a lot at address. And Tiger Woods was as close to classically orthodox — whatever that is — as it is possible to be.

But they all had at least one thing in common: consistently holing out from all distances went a long way towards making them champions.

“It used to be argued that putting was 45 percent of the game,” says Kenyon. “That number was arrived at by simply adding up the shots taken. But if we assume every round contains, say, ten tap-ins from a foot, there is basically no skill involved in those putts. A five-year old could easily make them all. So they have no real significance.

“Statisticians have thus arrived at the conclusion that putting is 20 percent of the game. But if you look at the average of any PGA Tour winner, putting contributes 35 percent of their performance. If you want to be average, be happy with putting making up 20 percent of your game. But if you want to win, you have to get that number up to 35 percent. Which is still a lot for one club. Only the driver rivals the putter in that respect.”

Then there is the speed of greens. With the advances in agronomy and equipment over the last few decades, green speeds have increased hugely on tour. One look at a Masters from the 1970s reveals players ramming their putts towards the cups, a far cry from today when the merest touch on Augusta National’s glass-like greens is likely to propel the ball as much as 30-feet. But do lightning fast surfaces really provide the most stringent putting test?

“There is evidence to suggest that, as greens get quicker, putting stats get better,” says Kenyon. “But as they get quicker, the surfaces also tend to get better. So is better putting because of green speed? Or the condition of the surfaces?

“For me, the ideal is arrived at only after looking at how much slope there is on the greens. Really sloping Bermuda greens that are quick make down-grain putts almost impossible. Especially if it gets windy. In those circumstances, the game can get ridiculous. Over 12 on the Stimpmeter on sloping greens is about the limit. More than that and there is too much luck involved. It stops being putting. Trouble is, if we had greens running at seven or eight on the European Tour the Americans would stop coming altogether.”

Memo for European Ryder Cup captain Bjorn: slowish greens at Le Golf National next September might be a good idea.

Often times, the misses teach us more than the perfect ones.