PROS V JOES: How hard is Kiawah for the average golfer? This data says very hard 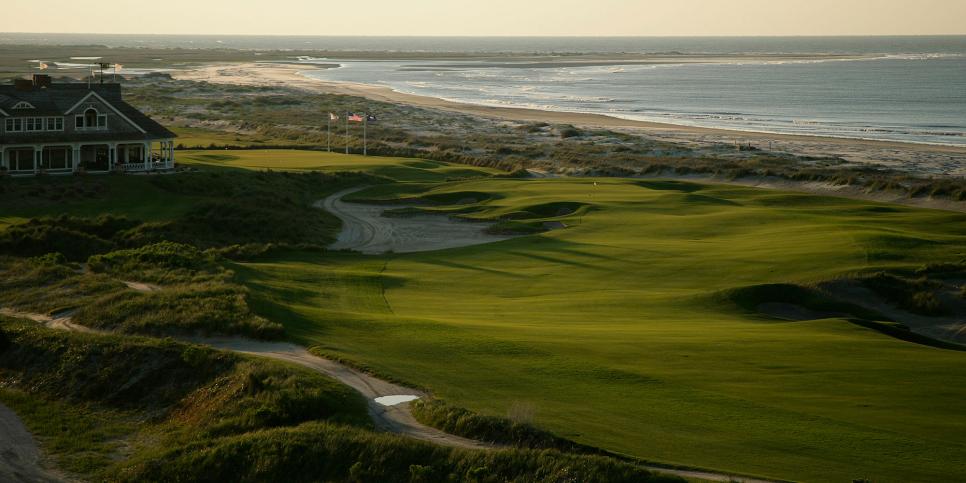 By Mike Strachura
It is fairly easy—and frankly repetitive—to explain how difficult the Ocean Course at Kiawah Island Resort plays, something that surely its architect, the late Pete Dye, cackles about while he looks down—or as some frustrated pros might suggest “up”—at his masterpiece.

Only once in the last decade has a course yielded a higher scoring average than the Ocean Course’s 74.57 when it last held the PGA Championship (only outdone by the borderline setup for the 2018 U.S. Open at Shinnecock Hills)​.​ For this year’s PGA Championship the Ocean Course added seven new tee boxes and has the flexibility to stretch to nearly 7,900 yards, which with the coastal winds might as well be equivalent to the distance to the sun. It may not ever play that distance, but regardless, Kerry Haigh, the PGA’s director of championships and wizard of course setups, believes the Ocean Course remains “second to none in terms of challenges.”

We used average player data to showcase the myriad ways the Ocean Course is a different challenge for tour players than it is average golfers.

This is, of course, understatement, like saying the Taj Mahal is second to none in terms of Mahals. Haigh is well regarded for finding the most fair of tests for his course setups, but put what he says about the Ocean Course (“the golf course itself is probably one of the most difficult golf courses in the country, depending on if the wind blows”) through Google Translate, and it actually sounds like what a traumatic brain injury feels like. In practical, real-world statistical, deep-dive analytics, the picture of the Ocean Course’s difficulty is much more stark, its relentlessness akin to the evil forces in Tenet. For example, the number of double bogeys/others recorded at the Ocean Course the last time the PGA Championship was played there (339) is nearly three times the average of tour events and major championships on an annual basis. Only three times have more big numbers been posted at an event since—all three being majors. The average score in the second round in 2012 was 78, the highest since the PGA Championship went to stroke play during the Eisenhower administration. There were 52 rounds of 80 or higher, including two in the 90s. Of the final 15 holes, 14 averaged over par for the week. And, again, they’ve made the Ocean Course longer and harder this time. Several holes could play 30, 40 or more than 50 yards further back, including the par-4 finishing hole which could set the markers at 505 yards compared to the 439-yard tee the last time around.

All of this, for those with a sense of history, is not news, of course. The Ocean Course has been wicked hard since it debuted 30 years ago for the 1991 Ryder Cup, whose commemorative video should be filed under Horror in your Netflix queue. Grizzled Ray Floyd, notorious for eating tough courses for breakfast, said at the time, “It’s so hard it’s unbelievable…If you had to play this golf course with a scorecard, I don’t see how you could finish.” That year in the Sunday singles matches, not one player on either side finished under par.

And yet, average golfers, like the Flagellants of the 13th century, continue to flock to it, as Brian Gerard, director of golf at Kiawah Island Resort, told Derek Duncan.

“People didn’t care what their scorecard read—they were there to play one of the most challenging, difficult golf courses in the country. …They would come in and say it was a hard golf course, but they didn’t complain about it.” 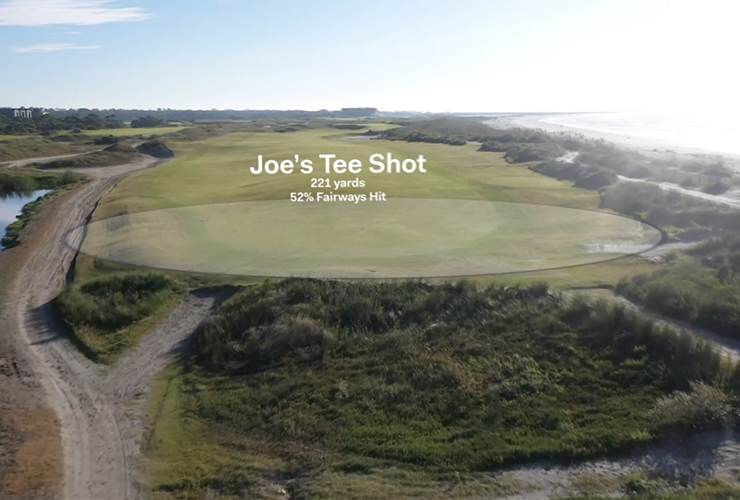 Using data from Arccos we can determine the discrepancy between how average players and tour players play a hole like Kiawah Island’s par-5 16th, beginning with their tee shots. 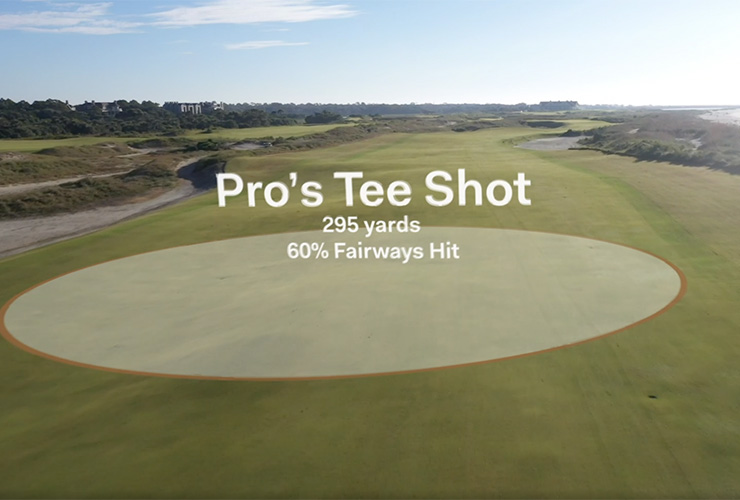 Still, none of those average golfers were stepping to the tee boxes that will be used for the PGA Championship. Indeed, many are not even marked on the yardage book available in the pro shop. Heck, even for the pros at the last PGA the full-length 18th tee that will be in play this year was blocked by a grandstand.

But the Ocean Course’s difficulty is probably best understood not by what the pros have done or what they might face this time around. No, a more practical reference might be what an average golfer might do at the Ocean Course in its full-throated PGA Championship setup. Since those back tees weren’t really open for play, we’re going to do some projections on what us Joes might do from the way-way-backs, courtesy of the crack research team at Arccos, whose GPS sensors track all sorts of average golfer stats. They’ve even dug up some impressively depressing numbers on what Arccos users have done on the Ocean Course. In short, welcome to Thunderdome. 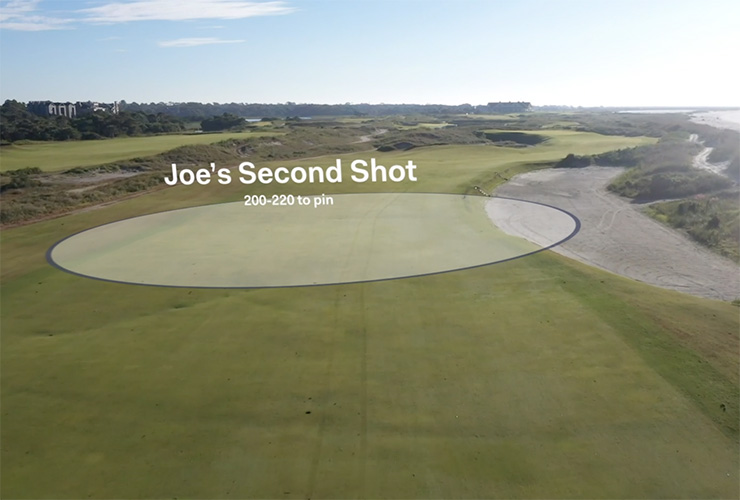 The challenge on long holes like the 16th at Kiawah also extend to where players are laying up to. Average players, according to Arccos data, still leave themselves with more than 200 yards into the green, whereas tour players have a mere wedge. 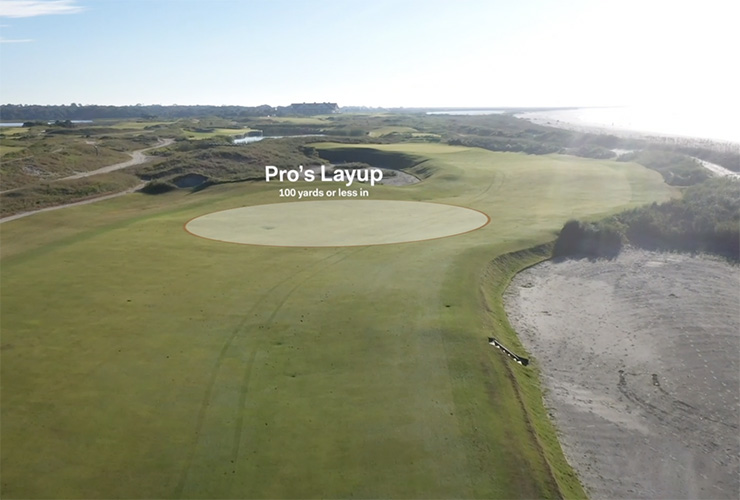 The challenge on long holes like the 16th at Kiawah also extend to where players are laying up to. Average players, according to Arccos data, still leave themselves with more than 200 yards into the green, whereas tour players have a mere wedge.

Arccos Caddie, which uses artificial intelligence to estimate the best possible strategy for the lowest possible score on every hole, predicts some very bad things for the average golfer should he or she sneak to the championship tees. As an example, a run-of-the-mill 13 handicapper’s best-case scenario is shooting 94. But that’s playing extraordinarily consistent golf, most especially hitting it relatively long and straight from both the tee and to the green. In other words, a wholly unlikely scenario on a golf course with a slope rating that registers at the USGA’s limit of 155. With massive length, doglegs and danger lurking on every hole and wind that sucks not only the life out of the average golfer’s mishits but his soul as well, every miss that seems compounded for the pros is doubly bad for the average Joes.

For example, on the par-4 4th hole, elite players might have to throttle back on their tee shots to avoid running into the marsh at 320 yards from the back tee. Paying customers, meanwhile, would need three good shots to reach the green, but the odds are not with them. On the tee shot, they’ve got barely a 50-50 chance of hitting the fairway, while the second shot is also missing the fairway nearly a third of the time and the third shot (a wedge from about a hundred yards) only hits the green a third of the time. Average golfers, per Arccos data, are failing to get up and down more than 75 percent of the time, and from one of those greenside bunkers on No. 6, the odds are barely one in 10 that an average golfer will get in the hole in two shots.

What makes a trip to the Championship tees even more intimidating is that average golfers almost never play courses of that length. Nearly 90 percent of the rounds recorded by Arccos users were from tees measuring 6,800 yards or less, more than a thousand yards shorter than the Ocean Course’s full measurement. Furthermore, of course, while the elite player is tested sternly by the Ocean Course’s mammoth length, he is still attacking the green from a much shorter distance with much more skill. In raw numbers from Arccos, an average golfer might play the benign opening hole with a driver and a 3-wood, while the elite player is often at most hitting his tee ball 80-plus yards farther and approaching the green with a short iron or wedge. The average proximity to the hole for the pro might be 20 feet while hitting the green 80-plus percent of the time. The average Joe ends up five times that distance from the hole with his approach shot, and he only hits the green one in 15 tries. Nothing like starting the day wishing you had contracted raging botulism.

A perfect snapshot of the difficulty for the average golfer playing the back tees at Kiawah is its diabolical finish. For elite players, it starts with a reprieve at the par-5 16th, which played as the easiest hole at the 2012 PGA and then wraps up with the terror-laden par-3 17th and the brutish 18th, which might require a final full swing of more than 200 yards. 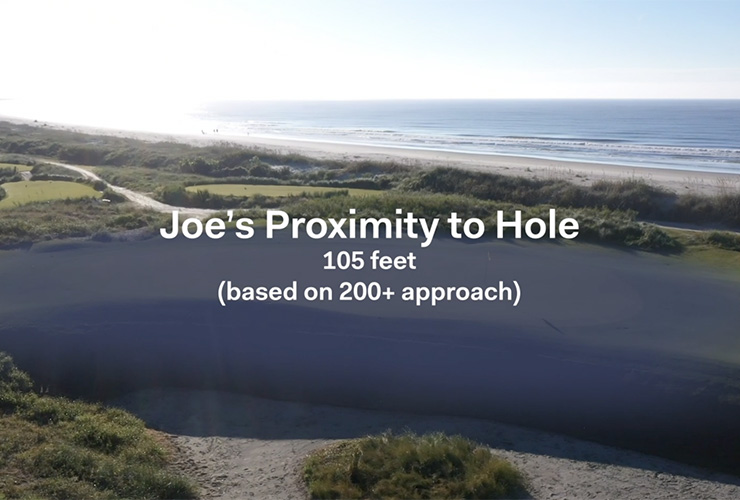 Naturally, the longer a club a player has into a green, the smaller the chance they have of hitting within close proximity of the hole. 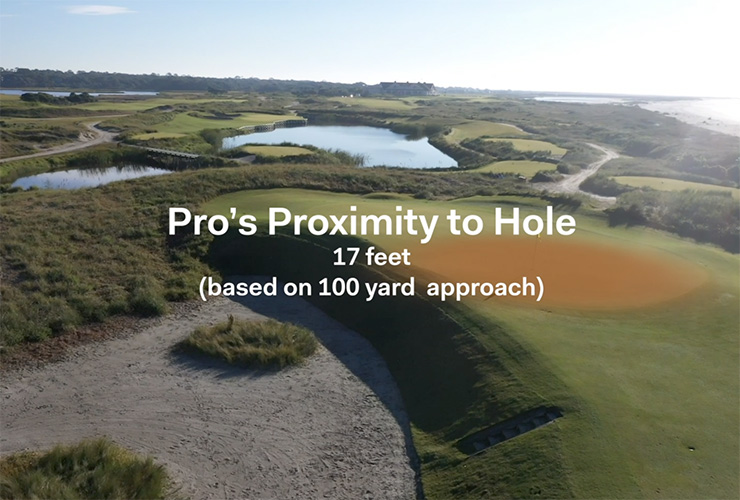 Naturally, the longer a club a player has into a green, the smaller the chance they have of hitting within close proximity of the hole.

For average golfers, however, turning for home at the Ocean Course offers nothing but the lash, especially all the way back. Where average pros most likely are playing those last three holes at an average of half-a-stroke over par combined, average Joes at best typically limp home having dropped nearly four shots to par.

At 608 yards, the 16th hole basically plays as a par-6. It likely would require a drive and back-to-back, well-struck 3-woods, a phrase the average golfer is about as familiar with as the average 8-year-old is with swallows’ nest soup.

The 17th hole might require a driver to reach the putting surface, but Arccos data says that club in the average golfer’s hands is going to produce a mis-hit short or right more than 60 percent of the time, and short and right at 17 is only Aeschylus and Euripides: Tragedy and Sorrow. It also affords the Average Joe the opportunity to do the same thing all over again. It only gets a little better from the drop area, which is one tee box closer and still a full 3-wood to the green. That club is going to be short and right for Mr. Average 58 percent of the time.

If the average golfer hasn’t run out of balls playing the 17th hole, the tee shot on 18 might make him wish he had. From the back tee, it’s likely a 210-yard carry just to reach the fairway, which the average golfer will miss 60 percent of the time. Even with a good shot, it’s still a three-shot hole and Arccos Caddie projects a score of 6 or higher is four times more likely than a score of 5 or lower.

As a final insult, don’t think it gets any easier for average golfers once they reach the vicinity of the greens at the Ocean Course. Arccos data says the average 11-handicapper loses almost five strokes compared to a scratch in terms of strokes gained around the greens and putting. Bernhard Langer’s final putt at the 1991 Ryder Cup infamously just sliding by the edge of the hole seems only as unfair as it is a fitting Ocean Course denouement.

“I think it’s great that they say it’s the hardest golf course in the world, but we’re still getting all the play we can handle, repeat play is up, too,” he said on the eve of the 2012 PGA Championship. “Listen, if Pine Valley were open to the public, they would line up all the way to Los Angeles to play it. That’s just what golfers do.”

Looking at these numbers from Arccos, though, the thought occurs: Move up a box.