Players Championship 2019: Tiger Woods playfully mocks Kevin Na on 17, both get a huge kick out of it 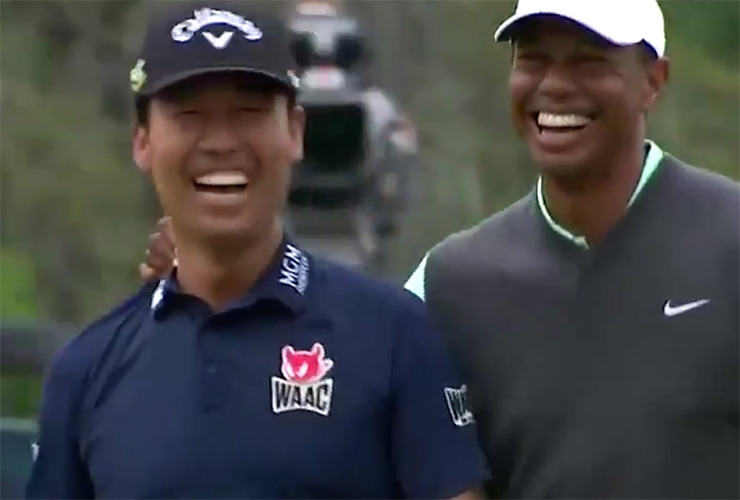 By Alex Myers
Playing with Tiger Woods is a memorable experience for any golfer, but Kevin Na can now claim to have been mocked by the 14-time major champ during a round. And he couldn’t have enjoyed it more.

The Woods-Na pairing got off to a brutal start during Saturday’s third round at the 2019 Players Championship with Woods dusting his playing partner by four shots despite carding a disappointing 39. Things got better on the back nine, though, and after Na made eagle to Tiger’s birdie on No. 16, both hit fantastic shots on the par-3 17th to near gimme range. That’s when the fans were treated to a show they weren’t expecting.

Na went first from four feet and rammed in his putt, doing his trademark quick walk to retrieve his ball, which Woods got a big kick out of. Then Woods buried his three-footer for birdie and playfully imitated Na’s cocky move and the two shared a laugh, a fist bump and even a hug. Good times on the island green! Check out the hilarious sequence:

Tiger has now gone 2-7-2 through three days on the treacherous par 3. And during a round in which Woods struggled to get anything going, his light-hearted reaction was more evidence of the “new,” kinder, gentler Tiger. In fact, just two days before, Bridgestone released a new commercial in which Woods plays along with comedian Conor Moore’s impressions of him.

In any event, Woods parred to cap an even-par 72, while Na made one final bogey to shoot 78. From the looks of it, though, he didn’t seem to broken up about it. After all, he’ll leave this week with a highlight he’ll never forget.