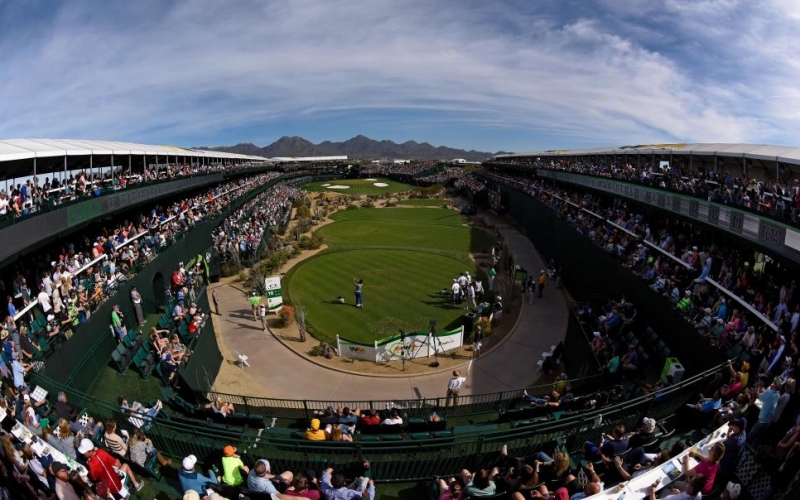 By Tod Leonard
Depending on where you are in the spectrum of pro golf as entertainment, you either love or hate the 16th hole scene at the Waste Management Phoenix Open. You either cheer the groundbreaking ingenuity and almost comical raucousness of “the Coliseum,” or you roll your eyes with disgust at how the reaction to single golf shots can make it sound as if a hockey fight broke out on the tee.

Either way, the 16th at TPC Scottsdale in the PGA Tour’s visit there each year is a theatre like none of other in the game, and that’s why there will be something decidedly different when the pros play there in the first weekend of February.

As of today, the host organisation of the Phoenix Open, the Thunderbirds, say they are still determined to have a good-sized crowd at 16 for the four days of the event, but it will be significantly scaled back—and no doubt quieter—than in recent years.

To have fans at all will be an anomaly on the 2021 West Coast Swing, with the Farmers Insurance Open on Monday announcing that it was joining the Sony Open in Hawaii and American Express in La Quinta, Calif., in not allowing spectators. The Pebble Beach National Pro-Am and Genesis Invitational in Los Angeles are expected to follow suit.

Scott Jenkins, the Thunderbirds’ chairman of the tournament for 2021, said on Monday that plans remain in place to build a one-story structure to accommodate fans at the 16th, though it will be noticeably smaller than what has essentially been a three-story stadium around the hole. In recent years, the tournament has packed 20,000 fans into that one area, while there are some events on tour that dream of having that many on their entire golf course. Ticket packages, Jenkins said, are being offered to a limited number of previous suite holders. 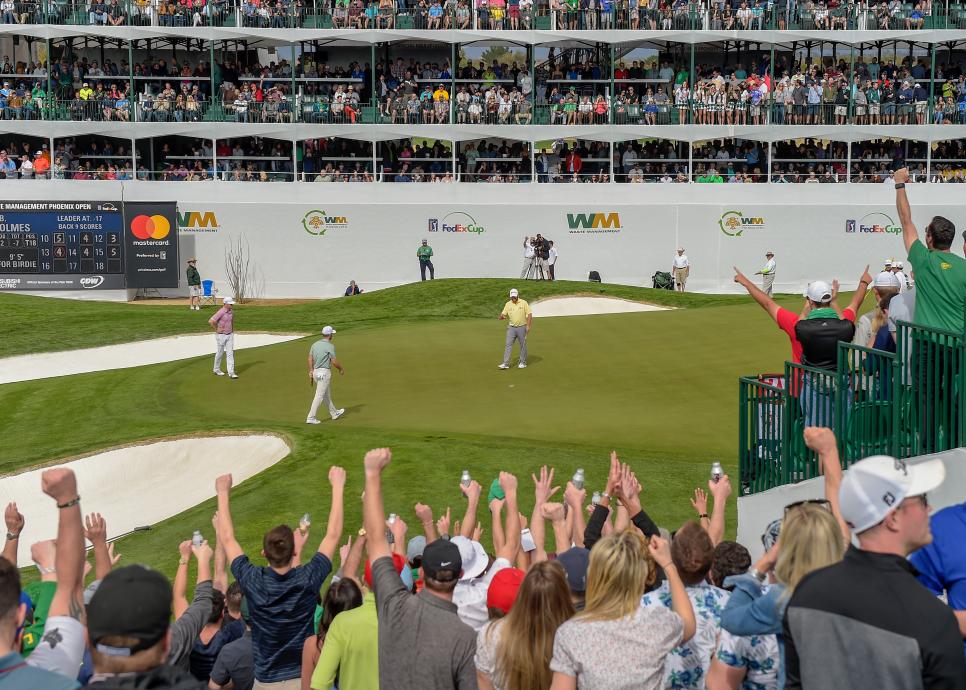 Tracy Wilcox
Fans cheer as J.B. Holmes makes a birdie at the 16th hole during the third round of the 2019 Waste Management Phoenix Open.

The Phoenix Open has long been considered the best-attended tour event, with organizers reporting crowds of more than 700,000 for the week. For 2019 and ’20, the Thunderbirds decided not to announce attendance, with then-Chairman Chance Cozby saying, “It’s just something that we don’t want to focus on going forward. We want to focus on charity.”

Jenkins said the Thunderbirds continue to work with the PGA Tour and state and local health officials to determine what is an acceptable number of fans at this year’s tournament. Like many regions of the U.S., Arizona has experienced a COVID-19 surge in recent weeks, and on Friday the COVID-19 Modeling Team at the University of Arizona sent a letter to the state’s Department of Health Services pleading for a statewide stay-home shutdown and mask mandate in December, while warning of dire consequences.

Without the steps, the team said, “it would be akin to facing a major forest fire without evacuation orders.”

On Monday, Jenkins said of the tournament’s situation, “It’s fluid. I’ve stopped trying to predict the future in our COVID world. We’d love to have fans. We’re the ‘Peoples’ Open.’ We also understand that the safety of our fans, players and volunteers is the most important thing.”

The NFL’s Arizona Cardinals played their first two home games without fans, allowed family members and staff to attend the third game, and then allowed 1,200 fans on Oct. 25 and 4,200 fans on Nov. 8 and Nov. 15. But the team announced last week that it will not allow fans for the Dec. 6 home game against the Los Angeles Rams, citing guidance from the Arizona Department of Health Services.