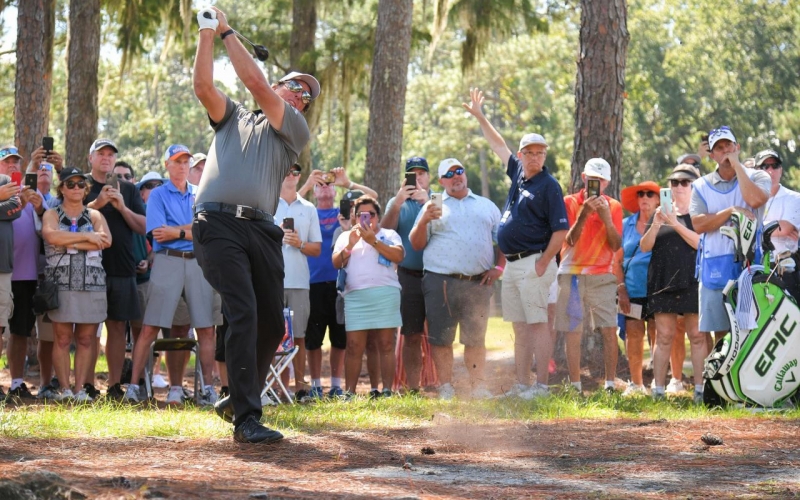 Ben Jared
Phil Mickelson hits a shot on the sixth hole during the final round of the PGA Tour Champions’ Constellation Furyk & Friends event.

And yet, win No. 3 on the 50-and-older circuit was no doubt more nerve-wracking than Lefty expected. Despite birdieing his first three holes on Sunday to grow his overnight two-shot advantage to three, a lost ball off the tee on the par-4 fifth hole resulted in a double-bogey 6 and foreshadowed a harrowing few hours to come.

Indeed, Mickelson’s penchant for making things “exciting” with his driver resulted in an interesting afternoon as he scrambled to find fairways (he hit just five on the day), save pars and fend off Jimenez.

A birdie on the 12th hole gave Mickelson a two-shot edge once more, but Jimenez countered with birdies on 13 and 14 to square things up. Mickelson then made his next move with a tap-in birdie on the par-5 15th hole (after just missing a 12-foot eagle putt) to regain the lead, and after Jimenez narrowly missed a 50-foot birdie roll on the 18th hole, Mickelson knocked in a 10-footer to close things out.

“It was a hard-fought battle,” said Mickelson, who joined Raymond Floyd (1992), Craig Stadler (2003) and Fred Funk (2007) as the only players to win on the PGA Tour and Champions Tour in the same calendar year. “I really enjoyed it. I’m enjoying playing out here. I need to work on a few things, like that silly mistake on 5. But I’m having fun doing it.”

The “entertainment” also included a wayward drive into the left pine straw on the par-4 16th hole. Mickelson proceeded to move away pine cones and twigs from around his ball. Moments later, standing beside his ball, it moved. Mickelson called in a rules official and after they conferred it was determined Phil did not cause the ball to move. He punched out his second shot in front of the green, then chipped his third to 18 inches before making the par putt.

A wild ride for par.@PhilMickelson‘s ball in the pine straw moved more than a minute after him removing a pinecone and it was ruled no penalty.

He saved par and takes a one-shot lead to 17. pic.twitter.com/15tOANlhpK

Naturally, a third win in four PGA Tour Champions starts (the last two accomplish that was Fred Couples in 2010) begs the question why doesn’t Mickelson play the tour more often, particularly if he says he’s “enjoying playing out here.” The answer is that he still feels like he can compete on the PGA Tour, as witnessed by his victory at the PGA Championship in May. 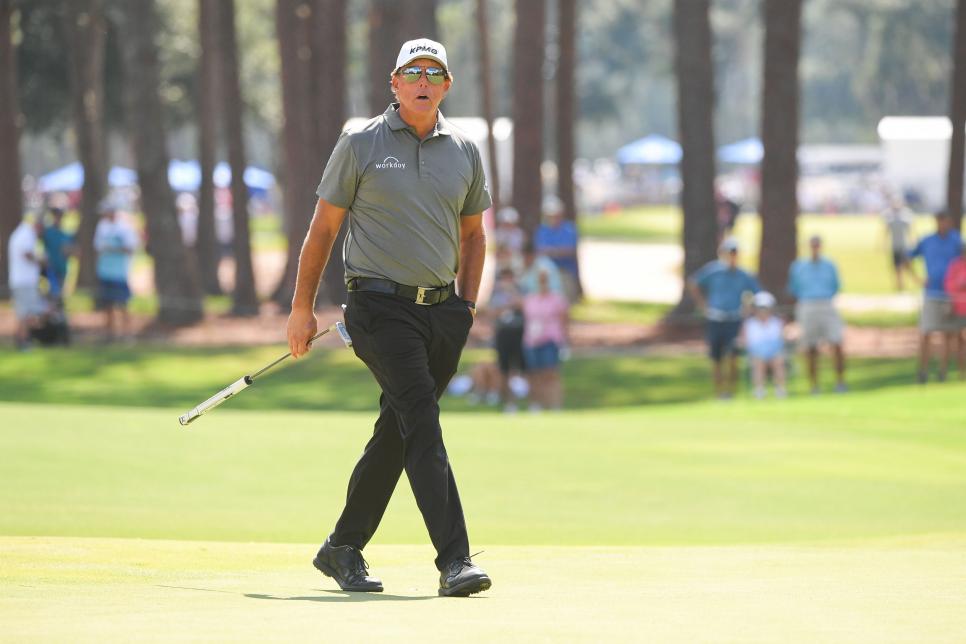 Ben Jared
Mickelson has held the outright lead or a share of the lead after seven of his 12 rounds playing the PGA Tour Champions.

When Mickelson does play with the seniors, he has proven exceptionally hard to beat. His length certainly helps; despite ranking 81st in driving accuracy this week (21 of 42 fairways), he finished first in distance (301.8 yards). In 12 career rounds now, Mickelson has held the lead at the end of the day seven times. He’s stroke average is 67.16, with all but one round under par.

David Toms gets emotional after first win in three years