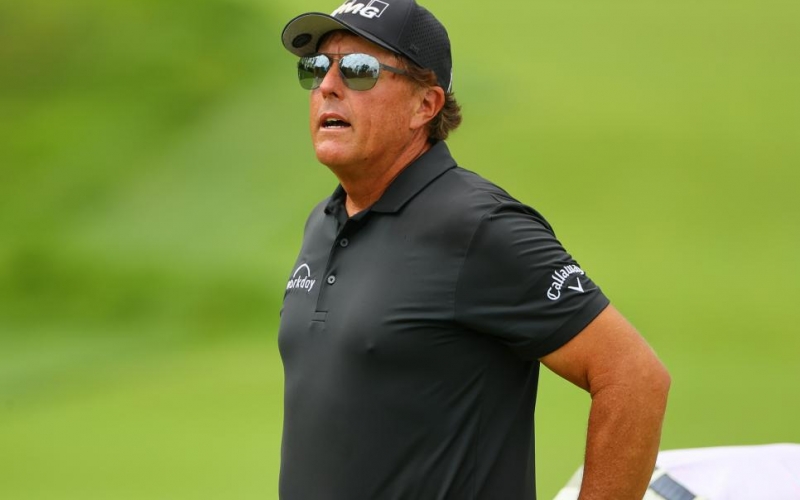 By Daniel Rapaport
Phil Mickelson did not mince words in taking the USGA to task for a potential equipment rules rollback on the maximum length a driver can be.

“Word is USGA is soon rolling back driver length to 46inches,” Mickelson wrote on Twitter roughly two hours before his second-round tee time at the BMW Championship on Friday. “This is PATHETIC.1st it promotes a shorter more violent swing (injury prone,) doesn’t allow for length of arc to create speed,and during our 1st golf boom in 40 years,our amateur gov body keeps trying to make it less fun.”

Word is USGA is soon rolling back driver length to 46inches.This is PATHETIC.1st it promotes a shorter more violent swing (injury prone,) doesn’t allow for length of arc to create speed,and during our 1st golf boom in 40 years,our amateur gov body keeps trying to make it less fun

The current maximum length a driver can be is 48 inches, and a number of players have experimented or put longer drivers in play to increase distance. That includes Bryson DeChambeau, who frequently trains with a 48-inch driver—and Mickelson, who currently games a 47.5-inch one. However, the number of players on the PGA Tour with drivers exceeding 46 inches is relatively small; most use drivers no longer than 45.5 inches, and some players, such as Rickie Fowler and others, use ones even shorter than that. Most drivers used by everyday amateurs also check in at 46 inches or less, meaning such a ruling would be more to protect against what might happen in the future rather than impact current conditions.

The USGA and R&A announced a plan to change the limit to 46 inches back in February but did not lay out any specifics as far as how or when it might implement such a limit or how it would be enforced. The move was a response to their co-sanctioned Distance Insights Project, the findings of which were released in February 2020.

“There is a 100-year trend of hitting distance increases in golf, as well as a corresponding increase in the length of golf courses, across the game globally,” the report said. “The USGA and the R&A believe this continuing cycle is detrimental to the game’s long-term future.”

Mickelson, 51, became the oldest major champion in history when he won the PGA Championship in May. He ranks 54th in driving distance on the PGA Tour at 301.6 yards per drive and was the last man to qualify for the BMW at No. 70 in the FedEx Cup standings. He opened the penultimate playoff event with a four-under 68.

The six-time major winner also criticized the USGA in replying to a number of commenters on Twitter, including one who asked what the reasoning behind the decision was. “Who even knows,” he wrote. “Logic isn’t their strong suit.”

Mickelson has long had a rocky relationship with American golf’s governing body. There is his tortured history at the U.S. Open, the lone major he has not won despite six second-place finishes. He called the USGA’s decision to outlaw U-grooves “ridiculous,” the third hole at Merion “terrible” in 2013 and, perhaps most notably, putted a moving ball during the 2018 U.S. Open at Shinnecock on a day when many complained of unfair conditions. The USGA granted him a special exemption into the 2021 U.S. Open at Torrey Pines, but it was made irrelevant when Mickelson won the PGA Championship.

Considered one of the more astute players when it comes to his equipment, Mickelson’s penchant for experimenting with different ways equipment can assist him in his tour career is well documented. As such, it should be no surprise he would come out against any type of equipment restriction. What is also likely is he will have more to say once the ruling comes down.