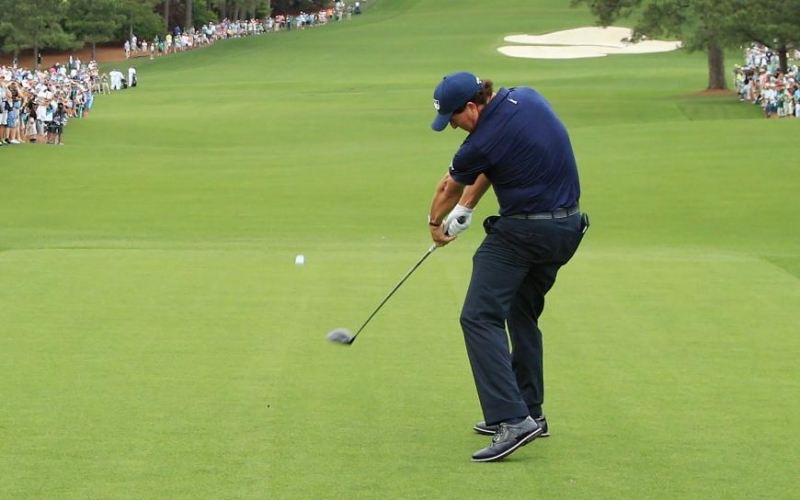 Andrew Redington
Phil Mickelson tees off in the 2019 Masters at No. 8, a hole he’s identified as one that he needs to drive it farther.

By Tod Leonard
It is part of Phil Mickelson’s Masters lore. In 2006, as he prepared to play at Augusta National, Mickelson took two drivers to the BellSouth Classic in Atlanta and put them both in play—one to hit fades and the other for draws. Mickelson smoked the field and won at 28-under-par, and so they went back into play the following week. And Lefty won his second Masters in three years.

For whatever reasons he’s never ventured back to Augusta with that strategy, though he did try it last year at the Memorial with awful results—he shot 70-79 and missed the cut. But Mickelson always seems to be tinkering with something to try to gain an edge, and with current distance king Bryson DeChambeau considering a 48-inch driver for the Masters next week, Mickelson has been testing a 47½-inch driver that he says he’ll use to try to win his fourth green jacket.

The longer driver has already been in play in Mickelson’s last two starts, and he’ll use it this week at the Houston Open. On the expansive fairways on the PGA Tour Champions, Mickelson won the Dominion Energy Classic three weeks ago, but then finished next-to-last, 26 strokes behind Patrick Cantlay, on the PGA Tour in the no-cut Zozo Championship at claustrophobic Sherwood Country Club. Mickelson did hit 59 percent of the fairways—solid for him, considering he found only 21 percent of the short stuff in the Safeway Open and U.S. Open.

“If you can fly it [that distance] there you have a chance to take advantage of some of those holes,” Mickelson said. “For example, No. 1, if you can carry that bunker, it’s a sand wedge in, and you’re thinking birdie. If you have to hit a 3-wood off of the tee and go to the side, or if you can’t carry it and you have to play more to the left, it’s a 6- or 7-iron into the green, so you’re thinking par. So there’s the ability to attack a number of holes if you can fly the ball a little bit farther.”

The driver won’t be the only new club in Mickelson’s bag. Though he has relied on Epic Forged Irons for his long- and mid-iron clubs for some time, he said on the podcast he’s going to go to that setup for the shorter irons, too. In classic Mickelson fashion, he explained that because Augusta mows its fairways from green to tee, the ball sits down more into the grain and he’s “always catching it a groove low.”

“It’s funny, because [the Epic Forged] is kind of a higher-handicap club, because the ball takes off the face so fast,” he said. “But I have such a high spin rate already that I’m looking to reduce some of that spin. And this gives me a chance to come into the shots, into the greens at Augusta, much higher and softer.”

Beyond the surreal nature of fans not being on the grounds at Augusta, Mickelson said the prospect of the tournament using split tees and starting one of his first two rounds at No. 10 will be “very awkward.” He also contends that the earlier start and finish times due to less daylight might have an effect on the leaders—so much so that we could see a Sunday charge from farther back in the pack.

“At about 6 o’clock at night, when the wind dies and you’re going through Amen Corner, without any wind, you can be much more aggressive and not have as big a fear of the wind swirling and pulling the ball into the water on 12, and 13, and 15 and so forth. And so you have much better playing conditions the later you tee off in April,” Mickelson said.

“But because it’s going to be dark by 5 o’clock, and I think we’re set for a 3 o’clock finish, that may not be the case. Because the leaders are going to be going through the back nine with swirling winds just like the rest of the field. And I think that you might see the winner come from the group that is three or four groups ahead of the final pairing this year.”