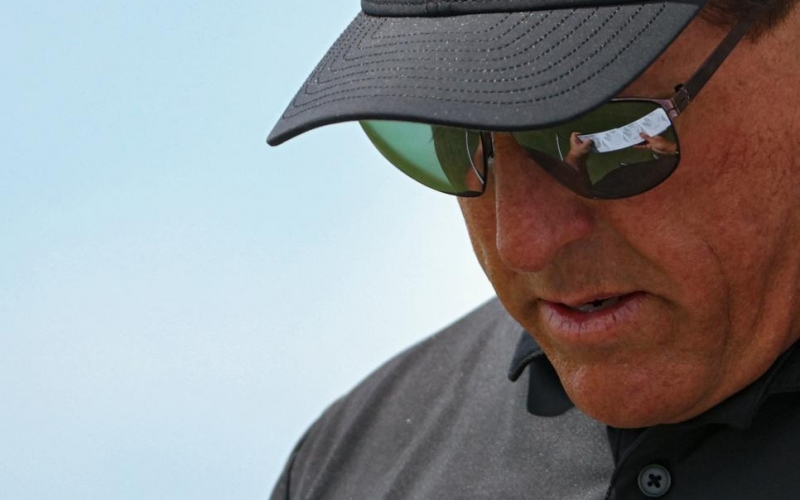 By Joel Beall
Phil Mickelson delivered a statement Tuesday afternoon—a statement that wasn’t so much an apology as it was a series of explanations and exposition. He acknowledged his comments in a November interview as reckless but said they were off the record. He was remorseful, not to the PGA Tour or its fans, but to the “visionaries” at LIV Golf Investments. He said he understood his words offended yet was quick to note criticism comes with the territory of being a disruptor. He gave sponsors his blessing to end their relationship and asserted, despite the optics, his actions are navigated by the best interests of the game. In short, there is a lot to unpack from his U-Haul.

Mickelson has made a career of escaping the inescapable, and we’re not referring to punch shots through Augusta National’s pines. Be it an insider trading scandal or purposefully hitting a moving ball or gambling ties to a mobster, Mickelson has managed to endure as one of golf’s most popular figures—a status seemingly permanently ensconced last May with his PGA Championship triumph at Kiawah Island. But that status, thanks to incendiary comments and a reported insurgency against the PGA Tour, feels very much in doubt.

Conversely, he is far from the first high-profile athlete to find himself in trouble and those believing this is the end of Mickelson are in need of a history lesson. Rare is the transgression in sports that doesn’t beget forgiveness or a second chance. The question isn’t will Phil be able to bounce back from this, but how?

Denise White is the CEO of EAG Sports Management and the go-to authority on athlete crisis management. Her work is so renowned that Netflix is working on a show about White’s life. Lacking as Mickelson’s answer may seem, White thinks it’s a start.

Speaking Wednesday about Mickelson’s effort to explain himself, White said, “For the most part it’s a good statement. He needed to apologize and take accountability, although he tries to explain too much and his accountability is a little lacklustre. But he gets his point across. He contradicts himself a couple of times, but I’m not gonna hold that against him. If I had been counselling him I would’ve made that statement much shorter, to the point, take accountability a bit more and apologize.

“You can tell he’s backtracking because all the people that he’s been in business with this Saudi league are probably furious. In one interview he killed a multi-million-dollar deal for not just himself but for a lot of other people, so I’m sure there are many unhappy people. He has a lot of clean up to do, and it’s not just his image.”

With his apology out of the way—or at least what Mickelson believes constitutes an apology—now what? To attorney Jay K. Reisinger, who has represented numerous Major League Baseball players (including Alex Rodriguez in the MLB’s investigation into his use of performance-enhancing substances), Mickelson’s next move is one he’s already telegraphed: take some time away. Whether that is his decision or a decision thrust upon him, from a crisis-management standpoint, is irrelevant.

“There are so, so few cases of an instance so bad that an athlete can’t return to the public. O.J. Simpson is not able to come back, that’s really about it,” Reisinger says. “Anything Phil has done is not a death knell. You lay low. You make your voice heard. He would be best to disappear for a bit. As long as he doesn’t repeat what he said, I don’t think what he’s done has permanently damaged [him].”

Ideally, this time would be one of reflection for Mickelson, and not just for PR’s sake. When athletes find themselves in trouble, there’s a tendency for the figure in question to be defensive. To some level they acknowledge they made a mistake, yet there’s also a belief they are being treated unfairly or the situation is being blown out of proportion. This can be destructive as it lays the brick to go down a similar path in the future.

For Mickelson, there needs to be an admission and education of what he did, what he said and how he said it was wrong, White asserts. And when he returns he needs to make that education known.

“He showed himself to be extremely greedy and insensitive,” White says. “He said he’s knowingly going into business with people he thinks killed someone. With people who are against gay people and women’s rights. Essentially, a group that is for all the things America is fighting against … and you’re going into business with them because, what, you’re trying to take down an organization [the PGA Tour] that built you into what you are? What does that say about your character? It’s not good. It’s hurting his reputation. To play the money card … much of America is middle class. So when you see a man making millions playing golf, it’s hard to sympathize when he says he’s not making enough.” 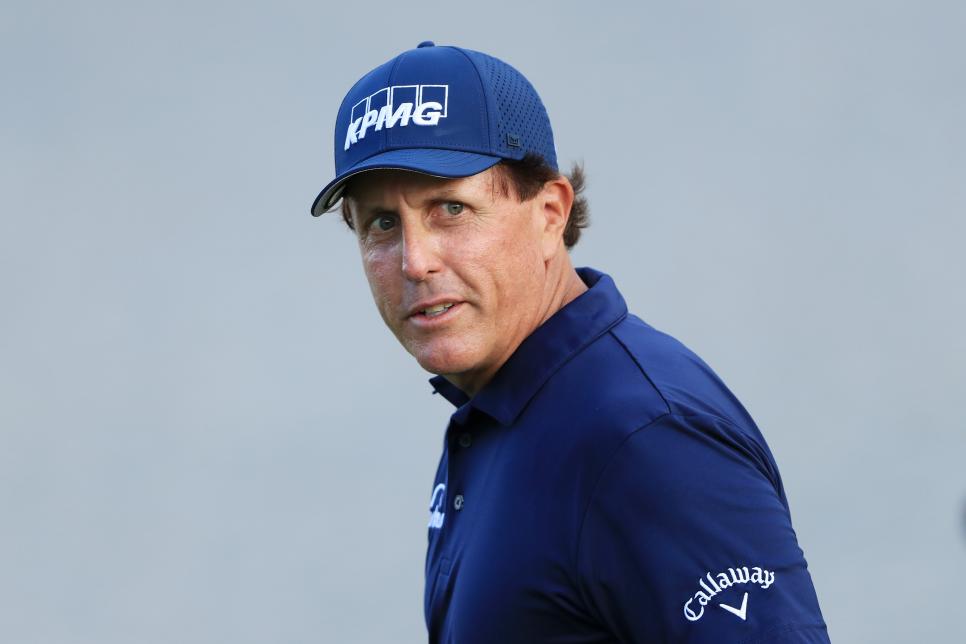 “Some of the grievances have merit,” White continued. “But there are other ways to do it without tearing other people down. Nobody likes anybody trying to go up the ladder by pulling others down. He’s going to have to shut up and handle things behind closed doors. To realize the environment in which he said it. Golf is already a sport known for excluding people. To say what he said in the hopes of trying to get others to see his point … he barked up the wrong tree.”

Reisinger says this is a period of accountability, where toughness is paramount. “You’re going to have to take this on the chin,” he says. “People are going to want to see that you’re hurt for what you said, that you can take it. That’s easier said than done.” And part of this exodus is, well, to prevent further damage. “Even if he believes what he said to be true, part of his failing was that he was incomprehensible,” Reisinger says. “There are better ways to say what he was trying to say, better avenues to do what he’s trying to do. He needs to clean himself up.”

Another point imperative to this process is expecting, and accepting, the fallout. In Mickelson’s case he’s seen his colleagues denounce him and a couple of players linked to the Saudi-backed league instead state their intentions to remain with the PGA Tour following his comments. Two of his biggest sponsors have left and more could follow suit.

Echoing Reisinger’s earlier sentiments, White says now is not the time for rebuttal. “That’s the sacrifice that happens when you say these things,” White says. “No one wants to be associated with you.” Essentially, those are concepts contrary to Mickelson’s persona, as he has thrived off public favor and the idea he’s the smartest in the room.

To understand where Mickelson goes from here requires a bit of context as well. While not minimizing what he said and what he reportedly did in organizing a breakaway league, the experts say the game needs to recognize where Mickelson’s misdeeds fall on the transgression spectrum and how that relates to the public.

“There’s crisis management cases where it’s domestic violence, and that’s rough because that resonates with people because the public can’t conceive of laying hands on another person,” White says. “This wasn’t that. Phil didn’t get arrested. There was no drunk driving. He didn’t hurt an animal or child. There are levels of crisis management and this isn’t at the top.” White says look no further than Aaron Rodgers, who was a pariah early in the NFL season for lying about his vaccination status only to win MVP at the end of the season.

To an extent, Reisinger says there is a simple solution. “The greatest PR move he could make is to win tournaments,” Reisinger says. “Because when you start to play well in sports, it does wonders for your PR. When you play bad, the play is attributed to what you said.” But for Mickelson, who turns 52 this summer and has only one top-10 finish (the PGA win) in his last 27 starts, it may not be the most feasible option, and whatever window exists is closing fast.

Which leads to Mickelson’s road back. The best thing he can do is return to competition when the time is right. To be back in his comfort zone, inside the ropes.

Mickelson will have to play to the fans with his bravado, to acknowledge their presence in ways most professionals fail to grasp (no matter the sincerity or motive behind it). To Mickelson, especially, he already has a base that was willing to overlook his dealings in white-collar crime, a temper tantrum at the 2018 U.S. Open, and his belittlement of Tom Watson at the 2014 Ryder Cup. He has likely lost some zealous golf fans, and yes, there will be trolls who pepper him with insults. Yet many fans don’t follow the day-to-day transpirings of the sport, and a good contingent is likely unaware of the true nature of his current circumstance.

“They know Phil as the people’s champ, the guy who gives thumbs up,” Reisinger says. “The fan that knows Phil as that guy, the fan is still in his corner.”

But that is a day in the distance. For now the man known for his brazen escapes must stay put, held captive not by his words or actions but time. In White’s view, time is also what will set him free.