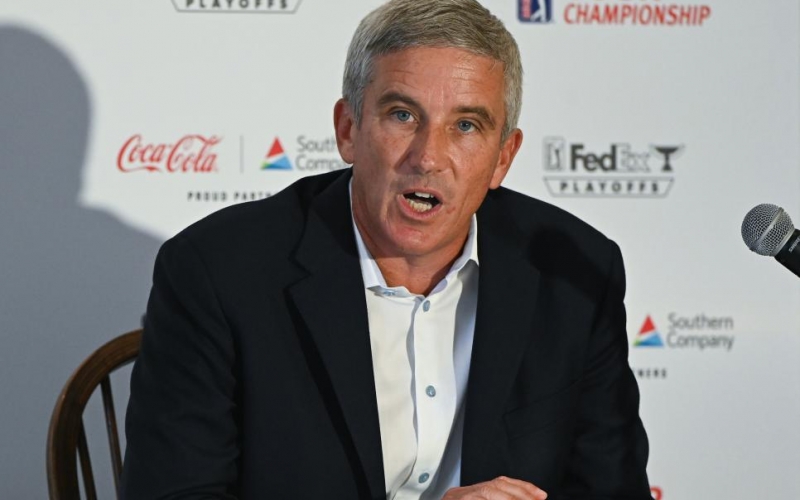 By Brian Wacker
ATLANTA — The PGA Tour has gone from a 2019-’20 season crippled by the COVID-19 pandemic, to what it is calling a “super season” made up of 50 tournaments, including six majors, for its 2020-’21 campaign.

Its full slate for next season, announced on Wednesday at the Tour Championship by Commissioner Jay Monahan, includes 14 tournaments that were either postponed or cancelled in 2020 because of coronavirus.

Among them are the U.S. Open, which was rescheduled from June and will be held in two weeks at Winged Foot Golf Club, and the Masters, postponed from April to November. The schedule also includes the men’s Olympic competition, which was originally slated for this summer.

“If you’re a golf fan, this is a dream season with more significant events than ever before. What more can you ask for?” Monahan said in his annual state-of-the-tour gathering with the media, his first in-person press conference since the season was put on pause in March.

The 2020-’21 season will begin next week at the Safeway Open in Napa, Calif., followed by the U.S. Open, Corales Puntacana Resort & Club Championship, Sanderson Farms Championship and Shriners Hospitals for Children Open.

From there, the CJ Cup and Zozo Championship, both originally scheduled to be played in Asia, will instead be held at Shadow Creek in Las Vegas and Sherwood Country Club outside Los Angeles, respectively.

Other notable changes include the Bermuda Championship, scheduled for Nov. 26-29 in the week after the Zozo, being elevated to full FedEx Cup point status after the WGC-HSBC Champions in China, originally slated for the same week, was officially cancelled earlier this week. Likewise, the Corales Puntacana Resort & Club Championship also will be played with full points available.

Meanwhile, as previously reported, the tour’s Florida swing has been reconfigured with the Honda Classic moving to the week after the Players Championship, March 18-21, while the Valspar Championship moves to the first week of May, after the Zurich Classic of New Orleans.