PGA Tour players react to Tiger Woods news: ‘We all have our dark places, and Tiger is human’ 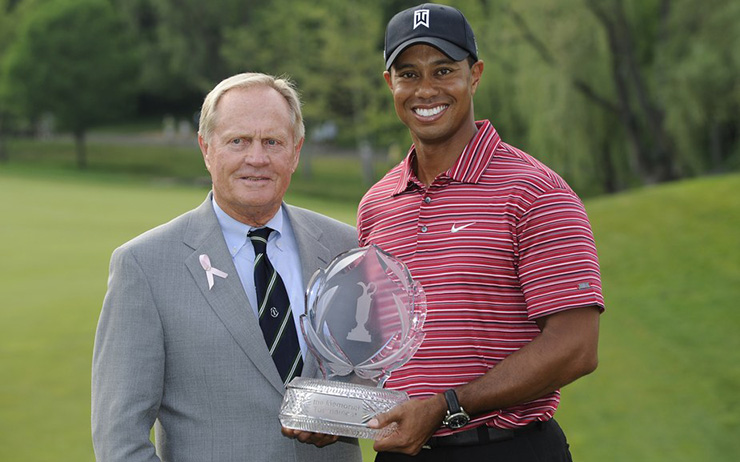 Like many of his fellow professionals and others in the world of golf, Bubba Watson saw the mug shot, the one of a disheveled and droop-eyed Tiger Woods that was taken after he was arrested on suspicion of DUI early Monday in Jupiter, Fla., and winced.

“It was just tough to see that all over the news,” the two-time Masters champion said.

The latest travails of the 14-time major champion were fodder for speculation and reflection Tuesday at Muirfield Village Golf Club, where the 42nd edition of Jack Nicklaus’ Memorial Tournament begins Thursday. Woods often has been a topic of conversation at the Memorial, having won the premier invitational a record five times. But two years ago he made news of a different sort when he shot a third-round 85, the highest score of his professional career.

And now this latest bizarre episode, in which police found Woods asleep behind the wheel of his black Mercedes-Benz parked on a six-lane road in Jupiter at 2 o’clock in the morning. The car was still running. He was cited not only for DUI, but also for improper stopping, standing or parking in an illegal space. He spent nearly four hours in jail before he was released on his own recognizance.

In a statement Monday night Woods blamed “an unexpected reaction to prescribed medications.” A police report released Tuesday showed that Woods took a breathalyzer test that indicated an alcohol level of .000. Nevertheless, the report also included that Woods had “extremely slow and slurred speech” and did not know where he was.

“Frankly, I’m surprised that I’ve been asked about him,” said Jim Furyk, a past Memorial winner and partner of Woods on Ryder Cup and Presidents Cup teams. “It’s obviously a difficult time for him as he recovers from back surgery. That’s all I can say.”

“It’s difficult to comment. It doesn’t feel right,” said Matt Kuchar. “We don’t know what happened and we don’t know what’s happening with his back. I think we all just want to see him get back to being healthy and playing golf again.”

“Four back surgeries, how can we know what that’s like,” Bill Haas said. “Obviously, he’s dealing with a lot. People jump to conclusions. A lot of them are wrong.”

Indeed, most of the initial reports of Woods’ arrest have proven inaccurate. Meanwhile, there are still questions that need answering, such as the reason Woods was driving while impaired so early in the morning. It was raised by one player who requested his name not be used.

“I think we all are worried about Tiger,” he said, “but you have to ask, ‘What was he doing at that hour, and why is he taking Vicodin?’ I thought he said a few days ago that he never felt better. But he’s taking Vicodin? I just hope that isn’t an indication of something a lot more serious.”

Watson said he and fellow players would welcome a chance to sit down with Woods, to let him know that they support him.

“Look, we all have our dark places, and Tiger is human, which everyone seems to forget,” Watson said. “I think we all are concerned for him as a friend, and we would want to help him in any way we could. Whatever the cause of what happened to him, we just want him to get better.”

One man who did sit down with Woods recently was Nicklaus, the Memorial founder and host. They chatted at the Masters Champions Dinner in April, where Woods, who did not play for the third time in the last four years, confided to Nicklaus just how painful were his back problems. Woods, whose 14 major titles is second only to Nicklaus’ 18 majors, underwent fusion surgery on his back two weeks later, on April 19.

As far as the latest incident, Nicklaus deflected questions except to say that “I wish him well.

“I hope he plays again. The tour needs him,” added the Golden Bear. “I’m a fan of Tiger’s. I’m a friend of Tiger’s. And I feel bad for him. I think he’s struggling. And I wish him well. I hope he gets out of it and I hope he plays golf again. He needs a lot of support from a lot of people, and I’ll be one of them.”