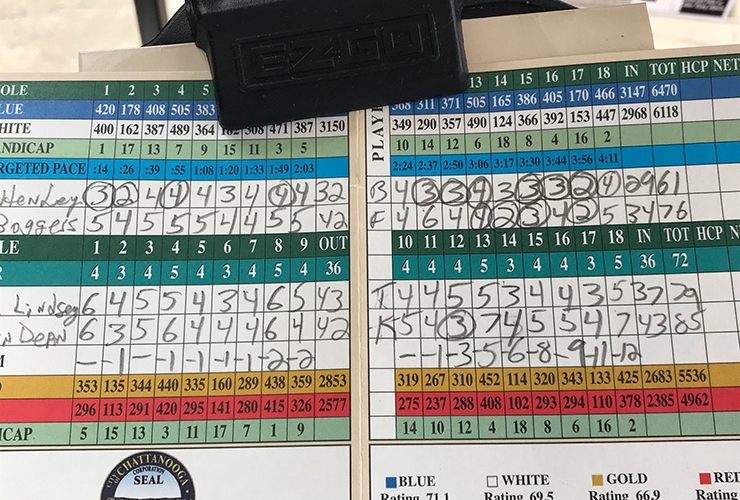 By Alex Myers
As the retired PGA Tour slogan goes, “These guys are good.” But when it comes to those caddying for the world’s best golfers, a slightly different saying typically applies: “These guys are also good.”

As we’ve seen through the years with guys like Damon Green and Paul Tesori, many loopers remain high-level golfers after abandoning their own playing dreams to caddie for others. Add Brent Henley to that list.

The younger brother of Kip Henley, a former mini-tour player and “Big Break” winner turned caddie, has worked for the likes of Woody Austin, Robert Garrigus, John Mallinger, and Garrett Willis. Although currently without a bag on the PGA Tour, that didn’t stop the former caddie closest-to-the-pin winner at the Players Championship from going on a Wednesday birdie binge. Check out this scorecard:

Short golf course that played even shorter but this will be the closest I come to shooting my age for at least 10 more years. I have no idea how or where this come from because I haven’t broken par but about 3 times in the last 2 years. 🤷🏼‍♂️ pic.twitter.com/Si78vMYpNe

How about that? A nice little Roger Maris. Not too shabby, Brent. And while he’s unemployed at the moment, he was happy to avoid one thing his brother, who currently works for Stewart Cink, had to go through at this week’s RBC Heritage:

OMG!!! I thought this Qtip thing was just a myth!! I think I will remain unemployed because I am not man enough to take this test! Surely there is a better way?!? https://t.co/0faFK5Y6K6

We feel you, Brent. Going low on the course seems a lot more fun than a Q-tip going deep into your head.