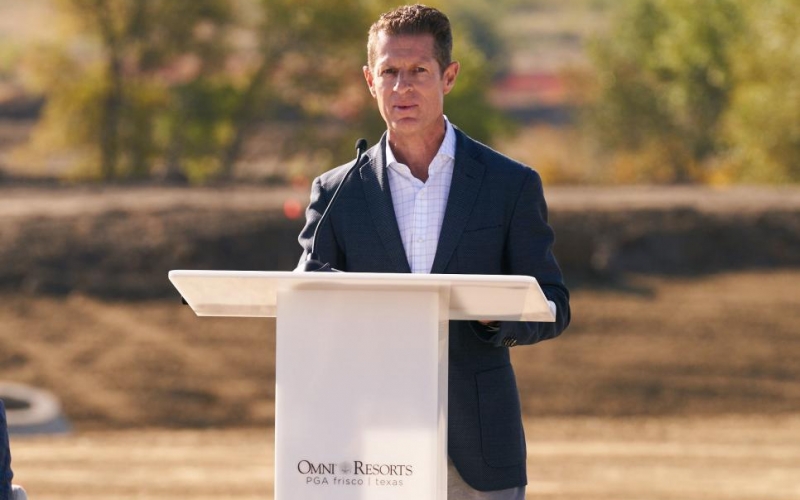 By Brian Wacker
The PGA of America’s chief operating officer, Darrell Crall, will be leaving the organisation following his arrest last month for an alleged assault on his girlfriend. According to an announcement from the PGA of America on Tuesday, the decision was mutual.

“We will be providing a further update on operations and staffing in the near future,” PGA of America President Jim Richerson said in part in an email to the association’s members, adding that the PGA’s move of its headquarters from Palm Beach Gardens, Fla., to Frisco, Texas, slated for 2022—which Crall was largely responsible for—continues to be a focus.

The decision comes a month after Crall, 53, was alleged to have attacked his girlfriend of three years, Angie Jasso, on Nov. 24. An arrest affidavit alleges that Crall pinned Jasso down on a counter and choked her, then threw her to the ground after she had refused to give her car keys to him at an apartment complex in Frisco. Crall was arrested and charged with assault family violence-impeding breath or circulation, which is a third-degree felony. He was released on $15,000 bond the following day and was initially placed on administrative leave from the PGA of America.

According to the affidavit, Jasso called 911 at 8:30 p.m. to request that officers come to the residence in the 5200 block of Town and Country Boulevard after being allegedly assaulted by Crall. She said in the affidavit that the two had begun arguing almost immediately after she arrived home.

Among Jasso’s charges is that Crall grabbed her neck forcefully enough where she was gasping for air. According to the affidavit, Jasso said Crall then pushed her to the ground, sat on her and pulled her hair.

Upon interviewing both parties, Frisco police saw that Jasso had a fresh red scratch on her cheek as well as two broken fingernails on her right hand and two scratches on her right hand. She also broke down in tears while recounting the incident to officers, according to the affidavit.

According to the affidavit, Crall told officers that at no time did he intentionally hit Jasso. He said that a dispute over the car keys led to Jasso flailing her arms, where she accidentally struck him on the right side of his head. He said that as she pulled away, they both fell to the floor and that he accidentally fell on top of her before pushing himself off her.

“Please know that Darrell has full faith in the legal system and expects that when all the facts are known, the truth—that no crime occurred—is something everyone will understand,” Crall’s attorney, David Ovard, said in an email to Golf Digest. “In addition, the person who initially made a complaint has since recanted all of the allegations and doesn’t want this matter to be involved in the legal system. While it is unfortunate that incomplete reports and false assumptions have been made public, Darrell expects to be fully exonerated.”

Officers, however, ultimately determined that Crall was the aggressor in the incident and placed him under arrest.

Crall, who spent 16 years as executive director of the Northern Texas PGA Section, joined the PGA of America in 2011, first as senior director of player development, then its managing director of strategic development. He was named COO in 2012.