PGA Championship 2019: John Daly responds to criticism from Tiger Woods, Golf Channel: Wish they had ‘all the facts’ 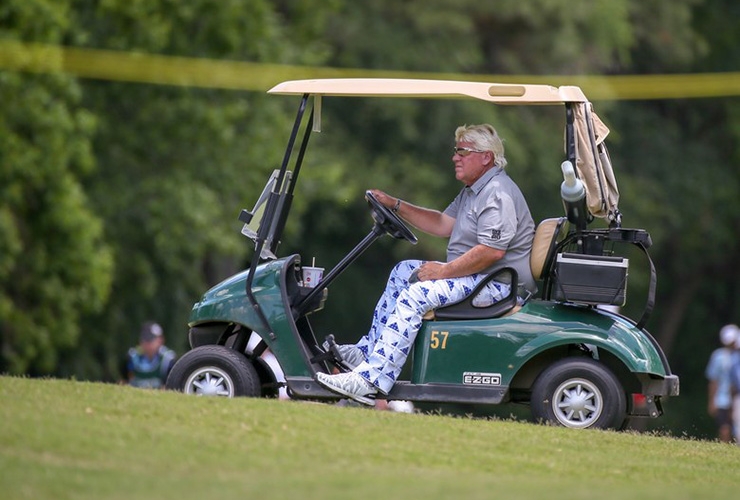 By Joel Beall
On Tuesday, Tiger Woods took a good-natured jab at John Daly’s use of a cart this week at Bethpage Black. “Well, I walked with a broken leg, so …” Woods said at his morning press conference when asked about Daly getting an exemption to ride at the PGA Championship, letting out a brief smile after a beat. Woods, of course, was referring to winning the 2008 U.S. Open at Torrey Pines, where he was plagued throughout the week by an ailing left knee.

In an interview with USA Today, the two-time major winner said he wishes Woods had “all the facts” before poking fun at him.

“Might have been a different comment,’’ Daly said to USA Today Sports. “As well as the Golf Channel Wednesday morning, when they bashed me pretty good, and a few others [who criticized me].”

The 53-year-old, who is in the field thanks to the lifetime exemption earned from his 1991 PGA Championship victory, has been granted permission by the PGA of America to ride in a cart during competition under the Americans with Disabilities Act. Daly suffers from osteoarthritis in his right knee.

Daly said he doesn’t harbour ill will towards Woods, calling him the “best player I’ve ever played with or seen.” Daly also remarked on Woods’ history of knee issues.

“He got his fixed for some reason. No doctor will replace my knee because of a different type of problem. It’s hard to explain why. I’m not a doctor. I just try to do what they say.

“Osteoarthritis is a tough thing, brother. If my knee was broke, I would have had it fixed. But my situation is totally different. It’s painful as hell is all I can say. As was Tiger’s, I’m sure.”

Daly withdrew from the U.S. Senior Open last year after his request for a cart under the ADA was denied. Daly’s knee problems also sidelined him from the Open Championship, although he was able to tee it up at Bellerive for the PGA Championship. He regularly plays on the Champions Tour, which allows its players to use golf carts during competition. He has not walked in an official event since the European Tour’s Omega European Masters last fall.

The last player to use a cart during a major was Casey Martin at the 2012 U.S. Open. Martin famously battled the PGA Tour for the right to ride in tournaments through the ADA, ultimately winning his suit after his case reached the Supreme Court. Martin also used a cart at the 1998 U.S. Open.

Daly has made just one cut at the PGA Championship since 2007, finishing T-12 at Kiawah Island in 2012. He lasted played Bethpage Black in competition at the 2002 U.S. Open, finishing T-70.