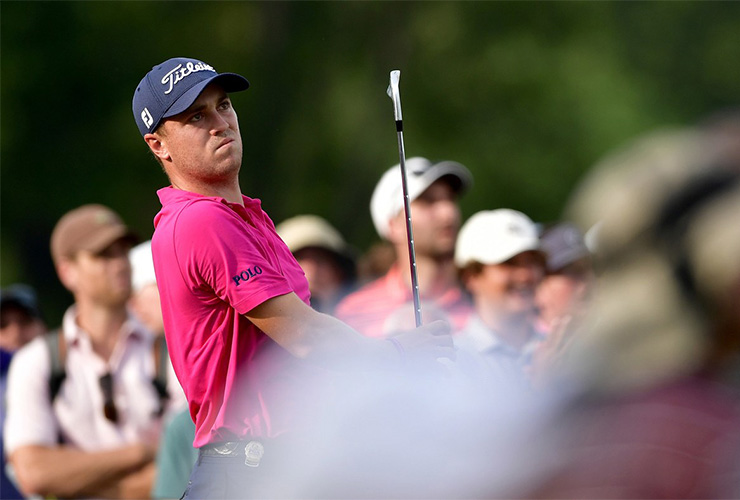 Justin Thomas was in the midst of what at best could be described as a temper tantrum during the final round of the Wyndham Championship two years ago, throwing clubs, dropping f-bombs and carrying on as he made a mess of one shot after another on his way to a back-nine 40. A father was on the other side of the ropes following along with his young son and took exception to the rookie’s behavior, so he tweeted at Thomas, telling him what a big fan of his he and his boy were—until that day.

The rising young star who was destined to play golf for a living since birth—Thomas first picked up a club, a cut-down MacGregor persimmon 2-wood, at 18 months old, his first words were “bag of balls” and his father and grandfather are both longtime teaching pros who briefly dabbled in the highest levels of the game—got a talking to from his dad, Mike, and eventually saw the tweet, too.

“I was embarrassed,” Thomas said, recalling the moment Sunday night at Quail Hollow. “I made myself look bad in front of not only the fans but a little kid, and I want to be a role model. So I reached out and told him I was really sorry and I would try to do better.”

At the 99th PGA Championship, on a sweltering Sunday, Justin Thomas did a lot better, exuding a type of cool and calm that runs against the grain of most 24-year-olds, doesn’t fit with a swing-out-of-the-shoes mentality and was simply impressive in the throes of trying to win his first career major championship.

“I just had an unbelievable calmness throughout the week, throughout the day,” Thomas said following a final-round three-under 68 to win by two strokes over Francesco Molinari, Patrick Reed and Louis Oosthuizen. “I just didn’t get flustered. I felt like I kind of kept everything in front of me. I know how hard doubles are to make up out here, so I tried to avoid those and was able to make a lot of birdies. It was great.”

So too was his golf, especially when it mattered most.

‘I told him this week when we talked that he was good enough to win anywhere. He hits the ball as well as any guy out there, and he has shots that other guys don’t have.’ —Paul Thomas

Thomas chipped in from 40 feet for birdie on the 13th hole at Quail Hollow Club to separate himself from a pack of five other players and seize control of the year’s final major. Then he sealed it with a spectacular soaring 7-iron from 220 yards over water on the par-3 17th to set up a 15-foot birdie putt that he would curl in.

A little luck helped along the way, too. 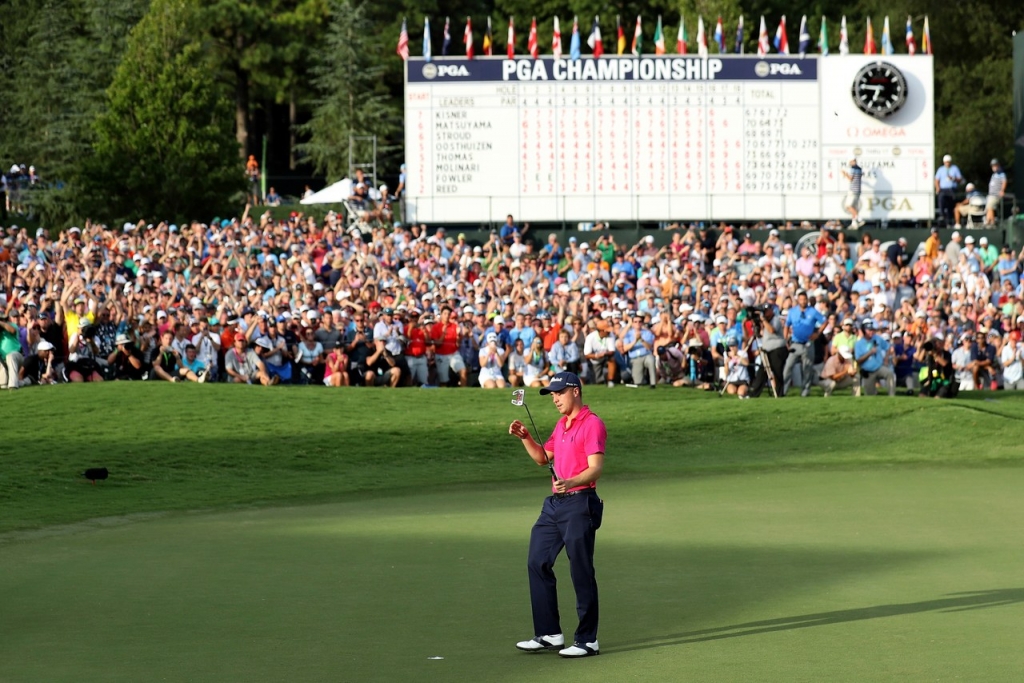 Thomas putts out on the 18th green to claim his first major. (Photo by David Cannon/Getty Images)

On the par-4 10th hole, Thomas’ eight-footer for birdie rolled up to the left side of the cup and hung over the edge. He pointed at the ball to go in then started walking away. After 11½ seconds, it fell in for a birdie.

It was a moment reminiscent of Tiger Woods’ chip in at the 2005 Masters, which sat on the edge before disappearing into the hole. Thomas walked away with a smile, fist-bumped his caddie, tipped his hat and then simply shrugged his shoulders.

Meanwhile, other contenders faded one by one.

Hideki Matsuyama, trying to become the first player from Japan to win a major, bounced back from back-to-back bogeys with two straight birdies on 14 and 15 to get within one. But after Thomas drilled a six-footer to save par on 16, Matsuyama missed his putt from a foot closer.

Kevin Kisner, who began the day with a one-stroke lead and was also trying to win his first major, bogeyed 16, three-putting from 100 feet and failed to birdie 17 before hitting his second shot on the closing hole into the water to play the final three holes in six over and finish with a 74.

Thomas, who came into the week having already won three times during the 2016-’17 PGA Tour season, shooting a 59 in Hawaii and a 63 in the U.S. Open, never wavered, bouncing back from an opening-hole bogey and finishing the week without a three-putt.

“I think what he learned is he’s got to play his game and not force it,” Thomas’ caddie, Jimmy Johnson, said. “Just let the course come to him and not try to over power it. Play a little smarter. He was trying too hard. I don’t think he was as much frustrated as he was trying too hard. Just had to let his potential come through.”

Watching it all unfold from their home in Columbus, Ohio, were Thomas’ grandparents. Through the text messages, phone calls and tears they could see a different Justin, too. 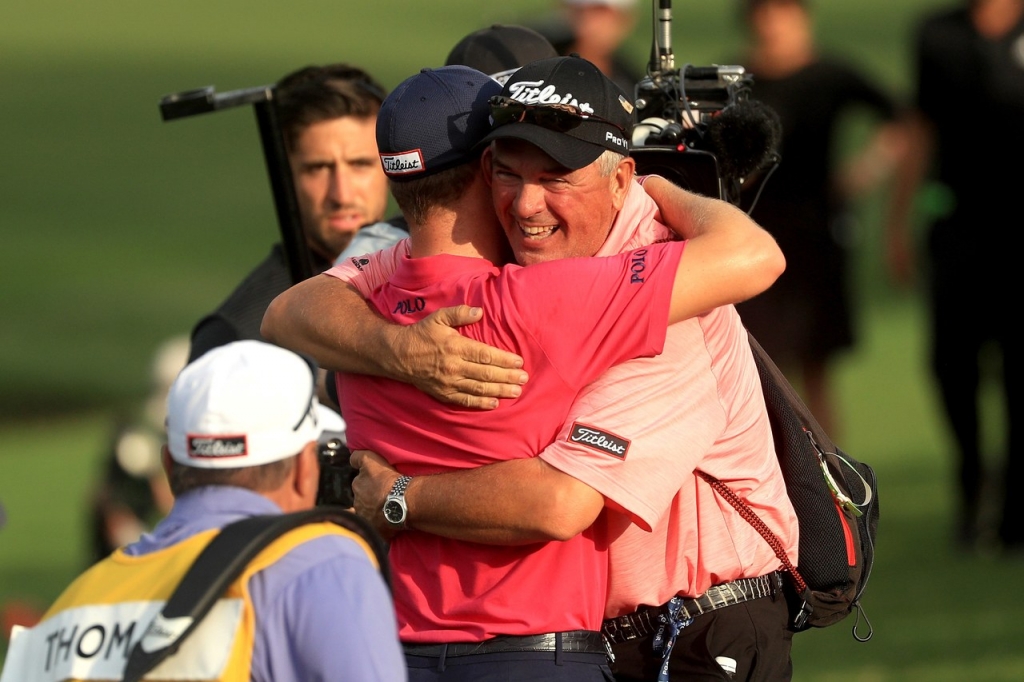 Justin shared the winning moment with his father, Mike. (Photo by Mike Ehrmann)

“You could see it last week at Firestone,” said Paul Thomas, who was the longtime pro at Zanesville Country Club in Ohio and played in the 1962 U.S. Open. “He made a double bogey on the ninth hole one day, and he came walking off the green and you’d think he made birdie. Everything was OK.

“I told him this week when we talked that he was good enough to win anywhere. He hits the ball as well as any guy out there, and he has shots that other guys don’t have.”

But in earnest it was when Justin didn’t have it that might have won him this tournament.

Struggling with his iron play on Saturday and faced with a borderline course setup in the eyes of many players, Thomas kept it together and grinded out a 69 to stay within two of the lead with one round to go. It was something he admitted he wouldn’t have been able to do a year ago.

“He’s very fiery, very emotional and very aggressive, and when you’re that way and it doesn’t work out it can go the other way real quick,” said Mike Thomas, who played college golf at Morehead State and had dreams of playing the tour that instead lived out through his son. “We spent the past year talking about that. Are you emotional or are you angry? He’s 24. He’s going to get more mature, and he showed a lot of maturity this week. [Saturday] he didn’t play well his maturity allowed him to grind out a score.

“Majors you don’t know how your gonna do. He did pretty good.”

In the year’s final major, Thomas was better than good. He was the best.