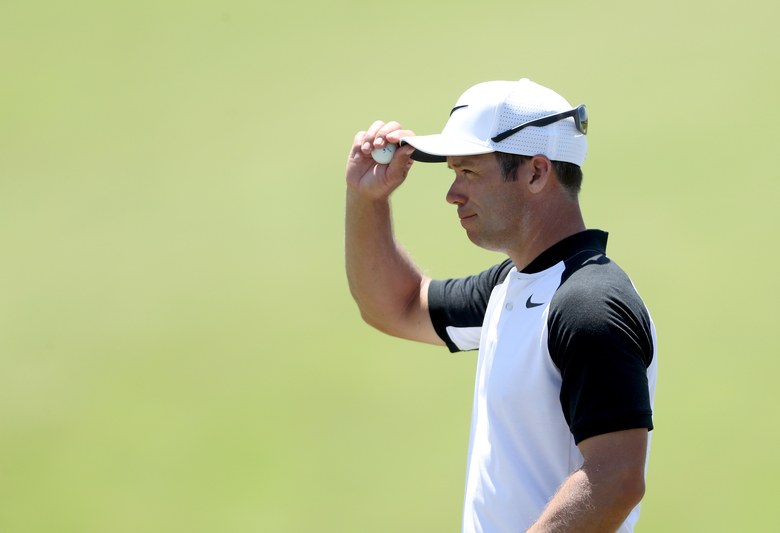 Six-under par after a splendid 66 on day one, Paul Casey began his second round in the 117th U.S. Open Championship on Erin Hills’ 10th tee and played his first two holes in one-under par. He then played the next ten holes in level par. Pretty dull huh?

Between the 12th tee and the third green Casey made only two pars. Also in the mix were a couple of bogeys, a triple-bogey eight on the long 14th and, just to round things off, five consecutive birdies.

By the way, the Englishman then completed the next six holes in level par. With six regulation figures.

Anyway, it all added up to a 71 that leaves the three-time Ryder Cup player on seven-under par after 36-holes and halfway towards what would be the biggest victory of the 39-year old’s life.

“It’s not every day you can enjoy a round with an eight on the card,” was Casey’s initial and smiling reaction to his roller-coaster day. “It was a good display of what can happen if you get out of position on this golf course, which is what I did. It was actually a good eight in the end.”

More importantly, Casey’s reaction to what could have seen the end of his chances was one of calmness. There was no hint of self-recrimination, something that has not always been the case over the course of the Arizona-resident’s career.

“It was difficult but I took my medicine,” he said. “There have been other times when I would have rebounded like that, but maybe not as calmly. I was upset with the score I had made, but in no way did it affect my attitude, or how I was going to approach the rest of the round or the next shot.”

Casey was honest enough to admit that such serenity might be a little harder to maintain over the next two days. But he will be doing his best to reproduce the attitude and shotmaking that has brought him this far.

“I want to be near the top tomorrow,” he said. “I want to be going into Sunday near the top. But those desires won’t affect the game plan one bit. It doesn’t really affect the mindset. There will probably be more nerves, more excitement. There is still a lot of golf to be played here. And I’ve shown what can happen with one bad swing. So you’ve got to be very, very patient and stay in the moment. I know it’s a cliché, but the last thing you need to be doing is thinking ahead, especially on this golf course.”

Then, of course, he did just that.

“If the sun stays like it is and the wind keeps baking the course out, it’s going to be pretty treacherous on the weekend,” Casey continued. “Which is just what I would like, and I think what the rest of the players want to see.”